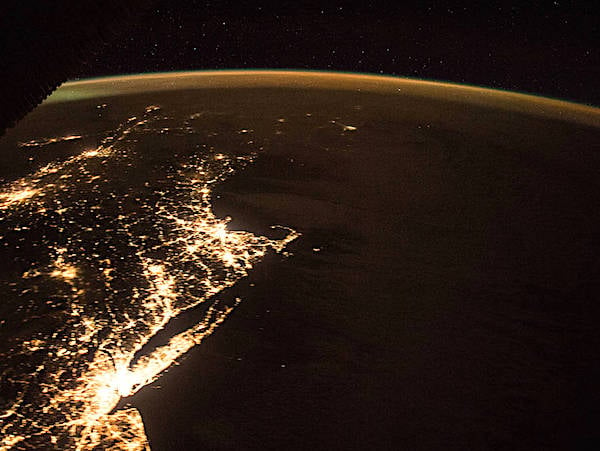 This nighttime shot shows the northeast coast of the United States from New Jersey up to Maine and the well-lit urban metropolitan areas of New York City and Boston along with parts of southern Canada including Montreal. (Photo from the International Space Station, courtesy NASA)

"It is not enough to merely have an American presence in space," he said.

The White House said the program will improve the nation's ability to "deter conflict" and ensure access to space.

"United States Space Command will be established as the newest unified combatant command under the Department of Defense and will include forces from all Military Services," the announcement said.

It will "accomplish strategic objectives and enhance the capability of our military to protect America’s dominance in space by … employing assigned forces from every branch of the military to achieve vital victories in space."

The U.S. is reliant on space for "vital military systems that protect us" all the way across the spectrum to "consumer systems that benefit our economy."

The White House said failing to act "may allow our adversaries to overcome our competitive advantage by denying us access to the space domain."

The United States Space Force, which is separate, was cited in a directive signed by the president. It will be the sixth branch of the armed services.

AP inserted politics into the issue, stating the Space Force "has become a reliable applause line for Trump at his campaign rallies" while pointing out Congress has not yet approved it.

"The renewed focus on space as a military domain reflects concern about the vulnerability of U.S. satellites, both military and commercial, that are critical to U.S. interests and are potentially susceptible to disruption by Chinese and Russian anti-satellite weapons," the report said.

The plans is for the Space Command to handle space programs, including communications and navigation efforts, while the Space Force joins the Navy, Air Force, Army, Coast Guard and Marines as a military service.

Defense Secretary Mark Esper is a supporter of plans to create both the Space Force and Space Command.

"To ensure the protection of America’s interests in space, we must apply the necessary focus, energy and resources to the task, and that is exactly what Space Command will do," he said.

NPR reported the Trump administration hailed the Space Command as a milestone.

"To ensure the protection of America's interests in space, we must apply the necessary focus, energy and resources to the task – and that is exactly what Space Command will do," Esper said this week.

Space Command actually dates back to 1983 when it was set up by the Air Force to coordinate missile operations and more. It was merged into the Strategic Command in 2002.

Trump last year ordered the Pentagon to make it a separate organization again.

Air Force Gen. John Raymond has been confirmed by the Senate to lead Space Command.