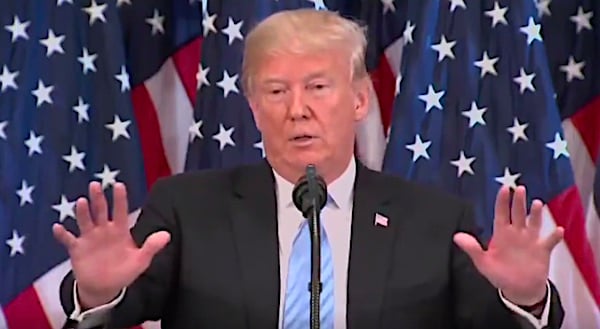 President Trump on Wednesday performed the same grim presidential duties that presidents before him carried after mass shootings.

Democrats, particularly presidential hopeful Joe Biden, took that as an invitation to attack. Biden, among other things, has threatened to beat up the president.

Biden accused Trump of "fueling a literal carnage" in the nation.

He blamed Trump's "incendiary rhetoric and racist attacks," without acknowledging that Democrats have been attacking Trump since even before he was president.

Biden, on a campaign trip into Iowa, claimed Trump is incapable of offering the moral leadership needed from the president. He said voters "cannot let this man be re-elected president."

Trump left Washington early on Wednesday for his first stop of the day, in Dayton, where over the weekend a shooter killed nine.

Officials who greeted him were "very warm," according to White House Press Secretary Stephanie Grisham.

The mayor said she thought those who were affected by the shooting appreciated the president's visit.

Fox News reported the protesters confronting the president were "attempting to partially blame him for the murders."

The report said: "The visit to Dayton was marked also by protests from those opposed to Trump's visit, with almost 200 protesters gathering outside the hospital. As the motorcade arrived at the hospital, one protester held a sign 'End This Terror' and gave the motorcade a middle finger. Protesters also gathered in front of a 'Trump baby' balloon."

DailyMail.com reported that even as critics and protesters were staging their attacks on the president, he visited survivors, first responders and staff at Miami Valley Hospital in Dayton.

Before he left on the trip, the president said he wanted to improve background checks for gun purchases and find a way to assure that mentally ill people did not obtain weapons.

He also promised to "bring up" the idea of banning some weapons. But he said, "I can tell you that there is no political appetite for that at this moment."

He charged that his critics are trying to make political points in light of the 2020 presidential election.

There were protesters in El Paso when he arrived there later in the day.

The Dispatch newspaper noted that local Democrats made negative comments about Trump after he left.

And he responded on Twitter to the latest attack: "Just left Dayton, Ohio, where I met with the Victims & families, Law Enforcement, Medical Staff & First Responders. It was a warm & wonderful visit. Tremendous enthusiasm & even Love. Then I saw failed Presidential Candidate (0%) Sherrod Brown & Mayor Whaley totally misrepresenting what took place inside of the hospital. Their news conference after I left for El Paso was a fraud. It bore no resemblance to what took place with those incredible people that I was so lucky to meet and spend time with. They were all amazing!"

The report said when the president was suggesting an award for law enforcement officials, Brown interrupted to urge him to ban "assault weapons."

Trump had said the problem is hate not guns.

In his Washington Secrets column in the Washington Examiner, Paul Bedard wrote: "Liberal media outlets have become 'unhinged' over the mass slayings in El Paso, Texas, and Dayton, Ohio, with the left-wing bias reaching 'unprecedented levels,' according to critics of the coverage."

He quoted Brent Bozell of the Media Research Center, who said, "Unprecedented levels of left-wing bias by the media in their coverage of the El Paso and Dayton tragedies. This is just a sample of the shameful partisan propaganda being peddled by so-called 'journalists.'"

The Republican National Committee reported MSNBC anchor and former Bush spokeswoman Nicolle Wallace said that President Trump is "talking about exterminating Latinos." She later tweeted that she had "misspoke."

The column provided other examples: