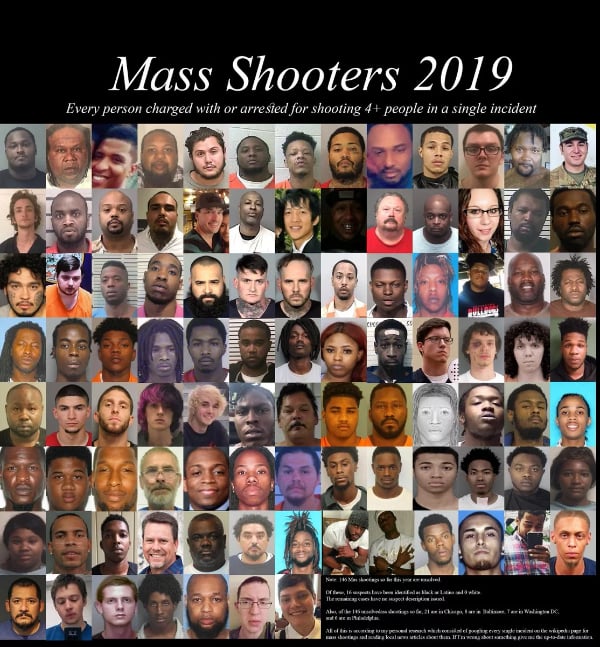 The attacks in El Paso, Texas, and Dayton, Ohio, over the weekend that have taken at least 31 lives have put a spotlight on the problem of young, isolated white men carrying out mass shootings.

But a list of the people arrested or charged in the 255 mass shootings recorded this year -- defined as four or more people shot or killed -- shows the problem isn't confined to white men or motivations of white supremacy.

If there's a thread, it's young men whose biological father was missing in their lives. After the Parkland school massacre in Florida, the Heritage Foundation cited a study showing that among the 25 most-cited school shooters since Columbine, 75 percent were reared in broken homes.

More than 520 people have died in mass shootings this year, according to the Gun Violence Archive, and at least 2,000 have been injured.

The Gateway Pundit noted that more than 140 mass shootings this year remain unsolved largely because no one will give descriptions to the police.

At least 20 of the mass shootings this year were in Chicago.

Over the weekend in Chicago, seven people were killed and 53 were injured in shootings.

As WND reported earlier Monday, Sen. Elizabeth Warren, a leading 2020 presidential candidate, echoed many of her Democratic colleagues in casting blame on President Trump for the shootings, charging he's been giving a "wink and nod and smile" to white supremacy.

The suspect in the Dayton, Ohio, shooting, however, said he was a supporter of Warren and described himself as a socialist. The suspected El Paso shooter clearly portrayed himself as a white supremacist on social media and in his "manifesto," but he also espoused "progressive" ideas, such as a universal basic income and radical environmentalism.

Rival candidate Sen. Bernie Sanders explicitly tied the shootings to Trump's "language," saying "the president has to stop the racism and that xenophobia immediately."

"Because, you go toward something to fill you up. Human beings, we were made for love and for purpose. And when we don't find it, then we look for something," he told Dana Perino.

"And [white supremacy and racism] are cheap substitutes, but they have deadly consequences."