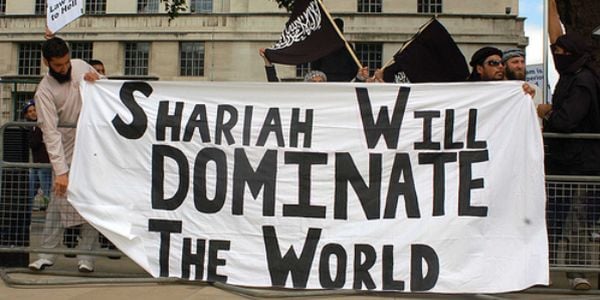 An investigation by the Thomas More Law Center of Ann Arbor, Michigan, has uncovered a mandatory "Islamic propaganda campaign" being forced on teachers that leaves "Christianity disparaged, and America bashed."

"We found that the teachers were subjected to two days of Islamic propaganda, where Islam was glorified, Christianity disparaged, and America bashed – all funded by … taxpayers," said Richard Thompson, the chief counsel for the organization.

The legal group filed Freedom of Information Act requests for documents about the indoctrination. It acquired confirmation that the district "presented no teacher-training seminars on Christianity, Judaism or any other religion."

The "training" was conducted by Huda Essa, who calls herself an expert on "cultural competency."

School assistant executive Melissa Matson said she was familiar with the presenter. But she refused a WND request answer whether or not the presenter promotes Islam and denigrates Christianity, or whether the district would hire other presenters to promote religions other than Islam.

"Most disappointing was the fact that of the more than 400 teachers attending the workshop, not one teacher challenged Essa’s denigration of Christianity or attacks on America," Thomas More said.

Essa's audio presentation, which was reviewed by the legal team, was riddled with errors, the report said.

"Essa provided no truthful information on Shariah law and jihad, two of the most important aspects of Islam. All references to terrorism were dismissed as having nothing to do with Islam. White Christian males, she suggested, are more dangerous than Islamic radicals," Thomas More said.

Her message, provided for the company Culture Links LLC, of "trash America first" also has been presented to teachers and instructors at colleges and schools in Michigan, California, Georgia, Texas, Florida and other states.

The site states: "Huda has positively influenced countless communities around the nation through her engaging and thought-provoking learning opportunities. She utilizes here extensive experience as a Cultural Competency Consultant, former Teacher and English Language Development Specialist to support organizations in successfully meeting their diversity, equity and inclusion initiatives."

On Islam, the topics include "Build awareness of Unconscious Bias," "Religious Dress and Gestures" and "Islamophobia; Revealing Truths through Research Based Facts."

"Islam’s holy book, the Quran, came straight from Allah to the prophet Muhammad and, unlike the Jewish and Christian scriptures, has never been altered or changed, she told the Novi teachers. Significantly, the Quran commands Muslims to 'Fight and kill the disbelievers wherever you find them, take them captive, harass them, lie in wait and ambush them using every stratagem of war.' (Quran 9:5)," the report said.

"This type of infiltration amounts to an Islamic Trojan horse within our public-school systems," Thompson said. "No other religion gets this kind of special treatment in our schools."

His organization's report said only action by patriotic American parents will halt such practices. It explained Thomas More has several legal cases against schools that have promoted Islam while "trashing Christianity."

The report cited a New Jersey case in which students were taught "Islam is the true faith." In a Maryland case, teachers insisted "Most Muslims' faith is stronger than the average Christian."

Thomas More said the presentation portrayed Muslim women as victims of Islamophobia, even though in 2017 anti-Jewish hate crimes outnumbered anti-Muslim offenses by about four-to-one.

Open Doors' 2019 World Watch List confirms Christians are the most persecuted of all religious groups worldwide, with eight of the top 10 most dangerous nations Muslim-majority.

"Essa hammered Novi teachers with the Islamic teaching that the Jewish and Christian scriptures are not to be trusted. Although once pure, they were gradually 'corrupted' by unscrupulous men. Only the Quran contains the final, 'pure' words of God, she said," Thomas More said.

The group also found Novi schools have no guidelines for the selection of presenters for teacher-training events, and the district "did not fully vet Huda Essa" before selecting her as a presenter and providing her with data about the school district and its students.

Also, Essa was given access to data from student and teacher surveys, and the "district said it had no records that would indicate it ever conducted a factual analysis of Essa’s presentation."