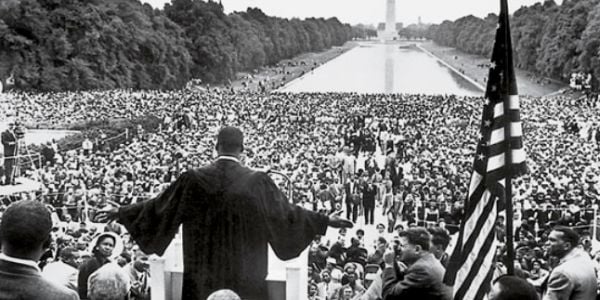 "I have a dream ... where little black boys and black girls will be able to join hands with little white boys and white girls and walk together as sisters and brothers," stated Rev. Dr. Martin Luther King, Jr., Aug. 28, 1963, at the Civil Rights March in Washington, D.C.

Booker T. Washington founded the Tuskegee Institute in Alabama. He wrote in "Up From Slavery" (1901): "I learned this lesson from General Samuel Chapman Armstrong, and resolved that I would permit no man, no matter what his color might be, to narrow and degrade my soul by making me hate him. With God's help, I believe that I have completely rid myself of any ill feeling toward the Southern white man for any wrong that he may have inflicted upon my race. I am made to feel just as happy now when I am rendering service to Southern white men as when the service is rendered to a member of my own race. I pity from the bottom of my heart any individual who is so unfortunate as to get into the habit of holding race prejudice."

Booker T. Washington wrote in "Up From Slavery" (1901): "Great men cultivate love ... Only little men cherish a spirit of hatred."

After the Civil War, freed slaves began to advance in society, but Democrat vigilante groups in the South tried to keep them down, committing over 4,000 lynchings. The Tuskegee Institute recorded that from 1882-1968, 3,446 blacks and 1,297 whites were lynched – the whites being "radical" Republicans who were caught registering freed blacks to vote.

Booker T. Washington walked the fine line between: racist Southern Democrats who committed violence if blacks tried to rise in social position; and Northern racial activists who criticized black leaders who were not demanding reparations.

Such was W.E.B. Dubois, who visited Mao Zedung and later joined the Communist Party.

Booker T. Washington warned in "My Larger Education – Being Chapters from My Experience" (1911, ch. V: The Intellectuals and the Boston Mob, p. 118): "There is another class of colored people who make a business of keeping the troubles, the wrongs, and the hardships of the Negro race before the public. Having learned that they are able to make a living out of their troubles, they have grown into the settled habit of advertising their wrongs – partly because they want sympathy and partly because it pays. Some of these people do not want the Negro to lose his grievances, because they do not want to lose their jobs. ... There is a certain class of race-problem solvers who do not want the patient to get well, because as long as the disease holds out they have not only an easy means of making a living, but also an easy medium through which to make themselves prominent before the public."

Booker T. Washington's approach to blacks being fully accepted into American life was to follow the path immigrants took. German, Irish, Jewish, Polish, Italian, and others immigrated at the bottom of the social ladder, being met with racial discrimination. But by hard work and the pooling of their efforts, they became educated, started businesses, accumulated wealth, made contributions to society, and as a result rose in public respect.

Community organizer Saul Alinsky wrote "Rules for Radicals" (1971). After giving an acknowledgement to Lucifer in the front pages of his book, Alinsky wrote:

Agitating organizers engage in a tactic called "psychological projection" or "blame-shifting," where the attacker blames the victim.

Sigmund Freud described this in Case Histories II (PFL 9, p. 132), where rude people accuses others of being rude.

Karl Marx is attributed with the phrase "Accuse the victim of what you do" or "Accuse your opponent of what you are guilty of."

Jesus taught in Matthew 5:44: "But I say unto you, Love your enemies, bless them that curse you, do good to them that hate you, and pray for them which despitefully use you, and persecute you."

FDR stated in a radio address for a Birthday Ball for Crippled Children, Jan. 30, 1940: "The answer to class hatred, race hatred, religious hatred ... is the free expression of the love of our fellow men."

FDR prayed on United Flag Day, June 14, 1942: "Grant us victory over the tyrants who would enslave all free men ... We can make ... a planet ... undivided by senseless distinctions of race."

Rev. Dr. Martin Luther King, Jr., warned Aug. 28, 1963: "In the process of gaining our rightful place we must not be guilty of wrongful deeds. Let us not seek to satisfy our thirst for freedom by drinking from the cup of bitterness and hatred. We must forever conduct our struggle on the high plane of dignity and discipline. We must not allow our creative protest to degenerate into physical violence. ... New militancy which has engulfed the Negro community must not lead us to a distrust of all white people, for many of our white brothers, as evidenced by their presence here today, have come to realize that their destiny is tied up with our destiny and their freedom is inextricably bound to our freedom. We cannot walk alone."

On April 16, 1963, Rev. King warned: "I stand in the middle of two opposing forces in the Negro community. One is a force of complacency. ... The other force is one of bitterness and hatred, and it comes perilously close to advocating violence. It is expressed in the various black nationalist groups that are springing up across the nation, the largest and best-known being Elijah Muhammad's Muslim movement. Nourished by the Negro's frustration over the continued existence of racial discrimination, this movement is made up of people who have lost faith in America, who have absolutely repudiated Christianity, and who have concluded that the white man is an incorrigible 'devil.'"

Rev. King continued: "I have tried to stand between these two forces, saying that we need emulate neither the 'do-nothingism' of the complacent nor the hatred of the black nationalist. For there is the more excellent way of love and non-violent protest. I am grateful to God that, through the influence of the Negro church, the way of nonviolence became an integral part of our struggle. ... If our white brothers dismiss ... those of us who employ nonviolent direct action ... millions of Negroes will, out of frustration and despair, seek solace and security in black nationalist ideologies – a development that would inevitably lead to a frightening racial nightmare. ..."

Martin Luther King, Jr., gave hope: "One day the South will know that when these disinherited children of God sat down at lunch counters they were in reality standing up for what is best in the American dream and for the most sacred values in our Judeo-Christian heritage."

Rev. Dr. Martin Luther King, Jr., who was a Baptist pastor like his father and grandfather, continued his Civil Rights March address, Aug. 28, 1963: "Now is the time to open the doors of opportunity to all of God's children. ... I have a dream that one day ... the glory of the Lord shall be revealed, and all flesh shall see it together. This will be the day when all of God's children will be able to sing with new meaning, 'My country 'tis of thee, Sweet land of liberty, Of thee I sing. Land where my fathers died, Land of the Pilgrims' pride, From every mountainside, Let freedom ring.' When we let freedom ring ... we will be able to speed up that day when all of God's children, black men and white men, Jews and Gentiles, Protestants and Catholics, will be able to join hands and sing in the words of the old Negro spiritual, 'Free at last! Free at last! Thank God Almighty, We are free at last!'"

Martin Luther King, Jr.'s niece, Dr. Alveda King, told the Call Detroit, Nov. 11, 2011: "My father, Rev. A.D. King, is brother to Martin. ... Uncle M.L., Daddy, and their earthly father, Daddy King were preachers of the Gospel of Jesus Christ. ... Daddy King rescued me from abortion in 1950. You can read the story in my book: 'How Can the Dream Survive If we Murder the Children?' ... When my mother wanted to abort me, Daddy King told her: 'No. They are lying to you. She is not a lump of flesh. She is a little girl, with bright skin and bright red hair. She will be a blessing to many.' So you see, this little girl who is part Irish, part African and part Native American is standing before you today to bear witness of Acts 17:26, that of One Blood, God made all people to live on earth in a Beloved Community, and one day, to live in Eternity with Him. So we are one human race, not separate races."