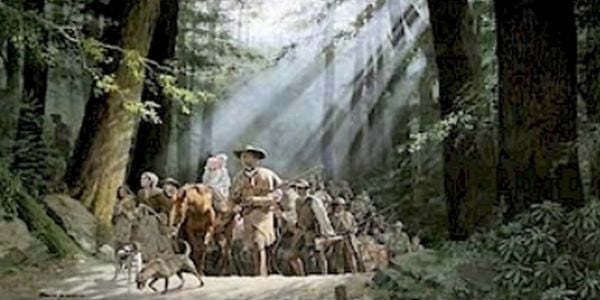 Daniel Boone's Quaker family had pioneered North Carolina's Yadkin River Valley. The Boone family lived four miles from Mordecai Lincoln, the great-great grandfather of Abraham Lincoln. The sixth of 11 children, Daniel Boone was given his first rifle at age 12 and began to hunt and explore.

Boone once exclaimed: "I can't say I was ever lost, but I was bewildered once for three days."

During the French and Indian War, 20-year-old Daniel Boone, and his cousin – future General Daniel Morgan – served as wagon drivers for the British in the Battle of Monongahela, July 9, 1755. Also in that battle, 23-year-old George Washington served as a Colonel under British General Edward Braddock. Out of 1,400 British troops, 900 were killed.

In 1756, Daniel married Rebecca Bryan. Together they had 10 children, and had all of them baptized as Christians.

In 1765, at age 30, Daniel Boone explored British-controlled western Florida. A family story is that he bought land around Pensacola, but his wife refused to move so far from her family.

In 1767, Boone began exploring Kentucky. In 1769, he traveled through the Cumberland Gap in the mountains and spent two years hunting and trapping in eastern Kentucky with his friend, John Stewart. Indians captured and separated them, Unfortunately, Boone later found John Stewart's body shot dead.

Captain William Russell left Daniel Boone in charge of Moore's Fort in lower Castle Woods from 1773-1775. When the Revolution began, Lord Dunmore fled and Patrick Henry was elected the first American governor of Virginia. A fort was named Fort Patrick Henry, from which Daniel Boone set off from in 1775 to survey Kentucky for the Pennsylvania Company. Boone erected a fort on the Kentucky River, which he named Boonesboro.

On April 24, 1777, Shawnee Indians were recruited by the British Governor of Canada to attack Boonesboro. Led by Chief Blackfish, the attack was repelled, though Daniel Boone was shot in the leg. As Shawnees destroyed cattle and crops, food supplies running low and settlers needed salt to preserve meat. In January 1778, having recovered from his leg wound, Boone led a party to get salt from Licking River. They were captured by Chief Blackfish's warriors who took some to Chilicothe, and others to near Detroit.

Boone and his men were made to run the gauntlet, as the Indian custom was to adopt prisoners into their tribe to replace fallen warriors. Daniel Boone was given the Shawnee name Sheltowee, meaning "Big Turtle." On June 16, 1778, Boone learned that Chief Blackfish planned to attack Boonesboro, so he escaped and raced 160 miles in five days, on horseback then on foot, to warn the settlement. Beginning Sept. 7, 1778, Boone successfully repelled the 10-day siege by Chief Blackfish's warriors.

Boone was promoted to Lieutenant Colonel in the Fayette County militia, November 1780. In April 1781, Boone was elected as a representative to Virginia's General Assembly. As Boone traveled to Richmond to take his seat, British dragoons under Colonel Banastre Tarleton captured him near Charlottesville.

The British released Boone on parole, and not long after Cornwallis surrendered at Yorktown in October 1781. Boone returned to Kentucky, and though Cornwallis had surrendered, some British continued to fight. In one of the last battles of the Revolution, the Battle of Blue Licks, Aug. 19, 1782, Daniel Boone was among those fighting hand-to-hand against 50 British Loyalists and 300 Indians. Daniel Boone's son Israel was shot in the neck and killed.

In November 1782, Daniel Boone was a part of the last major campaign of the war with George Rogers Clark's expedition into Ohio.

In 1782, Boone was elected sheriff of Fayette County. He bought land in Kentucky but lost it due to poorly prepared titles. Boone left Kentucky in 1799 and bought land in the Spanish Territory of Missouri, west of the Mississippi River. When Spain transferred this land to France, and France sold it to the United States as the Louisiana Purchase, 1803, Boone lost his title to this land too. A special act of Congress gave him back his land just six years before his death.

Boone was known to have a habit of taking the Bible with him on hunting expeditions, often reading it to others around the campfire.

Prior to Noah Webster's 1828 Dictionary, there was no standard spelling of words in America. This is seen in Daniel Boone's letter Oct. 17, 1816, to Sarah (Day) Boone, wife of his older brother Samuel, who lived with their daughter and son-in-law, Mary and Leonard Bradley in Missouri (Reuben Gold Thwaites, Daniel Boone, NY: O. Appleton, 1902): "Dear Sister, I wright (write) to you to Latt (let) you know I have not forgot you and to inform you of my own situation Sence (since) the Death of your Sister Rabacah. I Live with (Mr.) Flanders Calaway But am at present at my sun (son) Nathans and in tolerable halth (health) you can gass (guess) at my feilings (feelings) by your own as we are So Near one age. I Need Not write you of our Satuation (situation) as Samuel Bradley or James Grimes Can inform you of Every Surcomstance (circumstance). Relating to our family and how we live in this World and what Chance we shall have in the next we know Not for my part I am as ignerant (ignorant) as a Child all the Relegan (Religion). I have to Love and fear God beleve (believe) in Jeses (Jesus) Christ, Do all the good to my Nighbours (neighbors) and my Self that I can and Do as Little Harm as I can help and trust on God's marcy (mercy) for the Rest and I Beleve (believe) God never made a man of my prinsepal (principle) to be Lost and I flatter myself Dear Sister that you are well on your way in Cristianaty (Christianity). gave (give) my Love to all your Children and all my frends (friends), fearwell (farewell) my Dear Sister, Daniel Boone."

Daniel Boone died Sept. 26, 1820. He was buried in the Old Bryan Farm graveyard, but his remains were moved to Kentucky's Frankfort Cemetery, though some claim the wrong bones were moved.

Hazel Atterbury Spraker wrote in "The Boone Family" (1982, page 578): "Daniel was buried near the body of his wife, in a cemetery established in 1803 by David Bryan, upon the bank of a small stream called Teuque Creek about one and one-half miles southeast of the present site of the town of Marthasville in Warren County, Missouri, it being at that time the only Protestant cemetery North of the Missouri River."

Theodore Roosevelt continued: "Boone's creed in matters of morality and religion was as simple and straightforward as his own character. ... Late in life he wrote to one of his kinsfolk (sister-in-law, Sarah Boone, Oct. 17, 1816): 'The religion I have is to love and fear God, believe in Jesus Christ, do all the good to my neighbor, and myself that I can, do as little harm as I can help, and trust on God's mercy for the rest.' The old pioneer always kept the respect of red men and white, of friend and foe, for he acted according to his belief."

Related to Daniel Boone are:

In the straightforward spirit of Daniel Boone, Pat Boone wrote "The President Without a Country" in response to President Obama's comment "We're no longer a Christian nation": "You surely can't be referring to the United States of America, can you? America is emphatically a Christian nation, and has been from its inception! Seventy percent of her citizens identify themselves as Christian. The Declaration of Independence and our Constitution were framed, written and ratified by Christians. It's because this was, and is, a nation built on and guided by Judeo-Christian biblical principles that you, sir, have had the inestimable privilege of being elected her president."