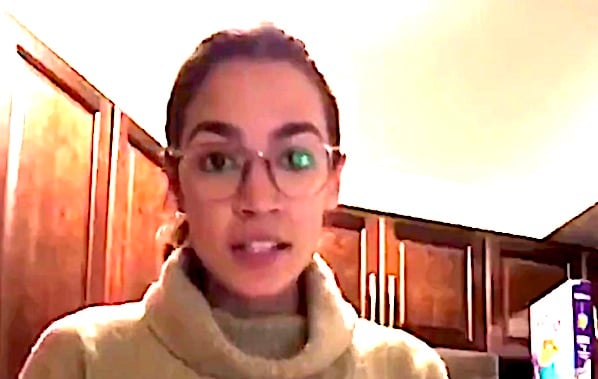 Democratic socialist U.S. Rep. Alexandria Ocasio-Cortez of New York -- who insists the world has only 12 years left -- claims she captured on video the poisoning of the air by fracking.

The only problem is there wasn't any fracking going on, and what she claimed was pollution was merely thermal waves.

I’m in Colorado w/ @JoeNeguse visiting communities whose air is being poisoned by fracking.

What we’re seeing is appalling. Companies are building fracking sites on public lands, across the street from schools + homes.

Their toxic emissions are invisible. This camera sees them. pic.twitter.com/Kem0MT1lMj

She claimed communities in Colorado are having their air "poisoned by fracking."

"What were seeing is appalling. Companies are building fracking sites on public lands, across the street from schools + homes."

She then asserted the camera was detecting "toxic emissions."

However, the Daily Caller reported experts in the field found Ocasio-Cortez didn't know what she was talking about.

Brian Cain of Extraction Oil & Gas told the publication: "Statements regarding an infrared (FLIR) video tweeted by Congresswoman Ocasio-Cortez yesterday evening are categorically false. In the short video, the congresswoman claimed to see 'toxic emissions' through a camera and stated that the air was being 'poisoned' by oil and gas development. In reality, the operations she was viewing have been lauded as among the best anywhere in the United States for their management practices and facility designs that protect air quality, public health and the environment."

Cain said: "Using an infrared camera, the congresswoman claimed to see 'invisible emissions,' when she was actually witnessing a heat signature caused by high-temperature (200-plus degrees) synthetic drilling mud being circulated to the surface against cooler fall temperatures in Broomfield. In fact, the camera angle used in the video viewed an area of our site that does not even include a possible source for the types of emissions being claimed."

The Colorado Oil and Gas Association also confirmed to the Daily Caller that no hydraulic fracturing was taking place in the video. For one thing, fracking doesn't happen until after the hole is drilled and rig work is finished.

Added Chris Wright of Liberty Oilfield Services: "The video is of a drilling rig. There is indeed no fracking (hydraulic fracturing) going on at that location. They mention volatile organic compounds (VOC's) in the video. I suggest they point their same device at a brewery or bakery to see similar levels of emissions if they do indeed have [a] highly sensitive camera."

Even Democrats weren't siding with the congresswoman.

"Interesting video, but … there is no fracking occurring at the site as shown and no way to determine compliance or lack thereof with CO air standards," wrote Mary Throne, a Democrat who is public service commissioner in Wyoming. "As Dems, we do ourselves no favors when we ignore science and facts."

Ocasio-Cortez was in the news a day ago with a report that she still has not paid delinquent taxes due from the operation of a publishing venture.

The New York Post reported a company founded by her in 2012 still owes state taxes.

Her staff members stated at the time it was the "first they had heard of her business's unpaid taxes and that the balance would be paid right away," according to a Daily Caller report.

The $1.618.36 "tax warrant" was issued in 2017 against Brook Avenue Press, a children's books publisher that the former bartender launched.

She once said, "And I think the part of it that is generational is that millennials and people, in Gen Z, and all these folks that come after us are looking up and we're like, the world is gonna end in 12 years if we don't address climate change."

She insisted there shouldn't be any concern about how to pay for it, because "like this is the war, this is our World War II."

"How are we saying take it easy, the America that we're living in today is so dystopian with people sleeping in their cars so they can work a second job without healthcare and we're told to settle down. It's a fundamental separation between that fierce urgency of now, the why we can't wait that King spoke of. That at some point this chronic realities do reach a breaking point and I think for our generation it reached that, I wished I didn't have to be doing every post, but sometimes I just feel like people aren't being held accountable. Until, we all start pitching in and holding people accountable, I'm just gonna let them have it."

She also has compared her election victory to a moon landing, vowed to "run train" in Congress, was fined for campaign-finance violations, was accused by Whoopi Goldberg of "pooping on people," accused President Trump of being "racist" and announced she needed a break to take care of herself.

And she said she wants more money.