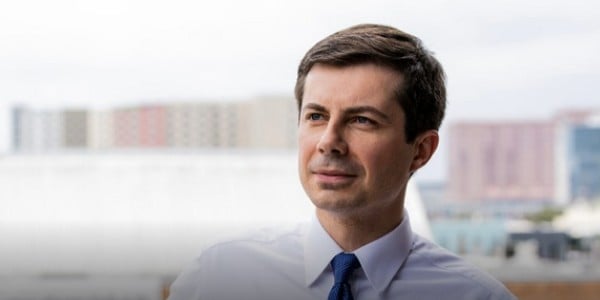 It's an argument that should turn the staunchest conservative into a daily campaigner against climate change, according to Democratic presidential hopeful Pete Buttigieg.

God's going to punish us for it.

The South Bend, Indiana, mayor, who calls himself a gay Christian, often invokes God, Jesus and the Bible in his political arguments.

He did it again Thursday on "The Late Show with Stephen Colbert."

See Buttigieg on "The Late Show":

"And the biggest problem with climate change isn't just going that it's going to hurt the planet, I mean, in some way, shape, or form, the planet's still gonna be here," Buttigieg continued.

"It's that we are hurting people. ... People who are alive right now, and people who will be born in the future. The way I see it, I don't imagine God's going to let us off the hook for abusing future generations, anymore than you would be off the hook for harming someone right next to you. With climate change, we’re doing both."

Earlier Thursday talk-radio host Rush Limbaugh offered an explanation for why the left is so enamored with global warming.

It's because they don't believe in God.

He told his listeners that people who believe in God acknowledge that life is no coincidence and that the brilliant design of the universe is "beyond our ability to comprehend."

The left, he said, believes the "earth, the universe, the solar system, the planets, whatever … [is] some random, haphazard, accidental thing that's just really, really fragile."

"Well, then, you can be easily coerced into believing that one or two slight changes could destroy it, if it's just an accident, if it's just a coincidence," he reasoned.

"It's just, like, some Big Bang. I mean, if it's really fragile… You notice one of the foundational aspects of selling climate change is that the earth is fragile, that the ecosystem and the climate are fragile, barely being held in place.

Limbaugh explained his personal view: "See, for me, folks, it is impossible to believe that all of this majesty and everything that we have learned about the universe and all that is. ... It’s impossible for me to believe that this just happened. It's too perfect. It's too exquisite. It's too complex! It's magical. It's majestic. It's beyond my ability to describe it. It's so much bigger than any one human being."

That means it's "so much bigger than a political party or political agenda."

"Having been raised in this tradition and having a solid belief in God, the Creator, it is easy for me to reject every bit of pap that political leftists attach to the existence, the creation of, the sustainability of the universe."