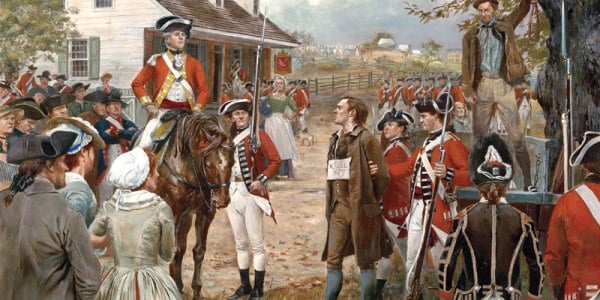 A Yale graduate, 1773, Nathan Hale almost became a Christian minister, as his brother Enoch did, but instead became a teacher at Union Grammar School. When the Revolutionary War began in 1775, Nathan Hale joined a Connecticut militia and served in the siege of Boston.

On July 4, 1775, Hale received a letter from his Yale classmate, Benjamin Tallmadge, who became General Washington's chief intelligence officer: "Was I in your condition ... I think the more extensive service would be my choice. Our holy Religion, the honour of our God, a glorious country, & a happy constitution is what we have to defend."

Nathan Hale accepted a commission as first lieutenant in the 7th Connecticut Regiment under Colonel Charles Webb of Stamford. Tradition has it that Nathan Hale was part of daring band of patriots who captured an English sloop filled with provisions from right under the guns of British man-of-war.

Following the Battle of Brooklyn Heights, Aug. 27, 1776, the British went from Staten Island across Long Island and were intent on capturing New York City.

General Washington was desperate to know British plans and wrote on Sept. 6, 1776: "We have not been able to obtain the least information on the enemy's plans."

Washington sought a spy to penetrate the British lines to get information. On Sept. 8, 1776, Nathan Hale stepped forward as the only volunteer. Knowing that the act of spying on the British, if caught, would be punishable by death, his fellow officer Captain William Hull attempted to talk Hale out it.

On Sept. 21, 1776, Hale was captured by the "Queen's Rangers" commanded by a loyalist British Lieut. Col. Robert Rogers. British General William Howe ordered Hale to be hanged the next morning. Hale wrote a letter to his mother and brother, but the British destroyed them, not wanting it known a man could die with such firmness. Hale asked for a Bible, but was refused. He requested a clergyman, but was denied.

Nathan Hale was marched out and hanged from an apple tree in Rutgers' orchard, near present-day 66th Street and Third Avenue in New York City on Sept. 22, 1776.

The Essex Journal stated of Nathan Hale, Feb. 13, 1777: "At the gallows, he made a sensible and spirited speech; among other things, told them they were shedding the blood of the innocent, and that if he had ten thousand lives, he would lay them all down, if called to it, in defense of his injured, bleeding Country."

"How beautiful is death, when earn'd by virtue!
Who would not be that youth? What pity is it
That we can die but once to serve our country."

Cato the Younger (95-46 B.C.), was a leader during the last days of the Roman Republic who championed individual liberty against government tyranny; representative republican government against a despotic dictatorship; and logic over emotion. Cato attempted to prevent Julius Caesar from becoming a dictator. Cato was know for his immunity to bribes, his moral integrity, and his distaste for corruption.

Edward Everett stated: "All the distinctive features and superiority of our republican institutions are derived from the teachings of Scripture."

Edward Everett remarked at the opening of the Dudley Observatory in Albany, New York: "I am filled with amazement, when I am told, that, in this enlightened age and in the heart of the Christian world, there are persons who can witness this daily manifestation of the power and wisdom of the Creator, and yet say in their hearts, There is no God."

Nathan Hale's grand nephew was U.S. Senate Chaplain Edward Everett Hale, who wrote in 1897, "Challenge to the Youth of Boston": "As a boy goes on his errand he shall say, 'To such duty I, too, am born. I am God's messenger.' As the young man tells the story to his sweetheart, he shall say, 'We are God's children also, you and I, and we have our duties.' They look backwards, only to look forward. 'God needs me, that this city may still stand in the forefront of his people's land. Here am I. God may draft me for some spiritual duty, as he drafted (Dr. Joseph) Warren and (Benjamin) Franklin. Present! Ready for service! Thank God I come from men who are not afraid in battle. Thank God, I am born from women whose walk was close to him. Thank God I am his son.' And she shall say, 'I am his daughter.' He has nations to call to his service. 'Here am I.' He has causeways to build, for the march forward of his people. 'Here am I.' There are torrents to bridge, highways in deserts, 'Here am I.' He has oceans to cross. He has the hungry world to feed. He has the wilderness to clothe in beauty. 'Here am I.' God of Heaven, we will be with Thee, as the fathers were. Boys and girls; young men and maidens, listen to the voice which speaks here."

So nigh is grandeur to our dust,
So near is God to man,
When Duty whispers low, 'Thou must'
The youth replies, 'I can.'