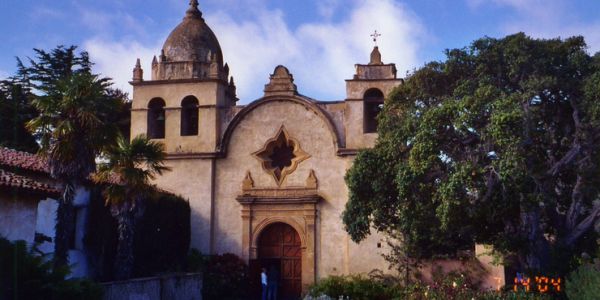 In 1535, Hernán Cortés explored the Baja California Peninsula, sailing the Sea of Cortés and founding the city of La Paz. In 1539, Francisco de Ulloa sailed around the Cedros Islands off the coast of Baja California. He was the first to call it "California," a name taken from a heroic romance novel, "Amadis de Gallia," published by Garci Rodríguez de Montalvo around 1510.

In 1542, Juan Rodríguez Cabrillo is believed to be the first European to actually explore the California coast. Landing at San Diego Bay, then sailing around the Channel Islands, he claimed "the Island of California" for Spain. He came ashore at San Pedro bay, which became the port of Los Angeles.

In 1579, Sir Francis Drake, sailing for England's Virgin Queen Elizabeth I, explored up the coast of California on his voyage to circumnavigate the globe. He anchored north of San Francisco at Drake's Bay.

In 1595, Spanish explorer Sebastian Rodriguez Cermeno, on his galleon San Agustin, sailed from the Philippines, named for King Philip II of Spain, to map the coasts of Oregon and California, down to Acapulco, Mexico.

Spanish Christian Missions introduced the Indians to the wheeled cart, which had been in existence in Mesopotamia since the fourth millennium B.C., and the wheelbarrow, which was invented in China in the 2nd century B.C.

Spain lost California to Mexico in 1821, but instead of giving people rights and freedoms, Mexico set up a monarchy with Augustin Iturbide as Emperor. Iturbide was executed, and Mexico adopted a federal constitution in 1824.

In 1833, General Santa Anna became president and, together with his Vice President Gomez Farias, instituted anti-clerical Mexican Secularization Acts. He took all Christian Mission property away from the Catholic Church and sold it to political insiders who supported his government.

When several Mexican States opposed Santa Anna, he sent his army and crushed the resistance. Santa Anna's ruthless actions precipitated the Texas War of Independence, 1836, and the Mexican-American War, 1846.

After the wars, California was purchased by the United States with the Treaty of Guadalupe Hidalgo in 1848. In 1849, workers in California building a sawmill for John Sutter on the south fork of the American River, discovered gold. Soon prospectors, called "Forty-Niners," arrived.

California's Constitution, which prohibited slavery, stated: "We, the People of the State of California, grateful to Almighty God for our freedom ... do establish this Constitution."

Regarding California's Catholic Missions, the U.S. Board of Land Commissioners wrote, as recorded in W.W. Robinson's book "Land in California" (Los Angeles: University of California Press, 1948, p. 28): "The Missions were intended ... to be temporary. ... It was supposed that within that period of time the Indians would be sufficiently instructed in Christianity and the arts of civilized life."

On May 23, 1862, President Lincoln restored all 21 California missions taken by anti-clerical Mexican Secularization Acts back to the Catholic Church: "I grant unto the ... Bishop of Monterrey ... in trust for the religious purposes ... the tracts of land described in the foregoing survey."

Many citizens are concerned that California may be demonstrating what Massachusetts colonial leader Cotton Mather wrote in Magnalia Christi Americana, 1702: "Religion begat prosperity, and the daughter devoured the mother."

Spanish Missions were an integral part of California's history. In 2004, the ACLU, similar to Santa Anna's Secularization Acts, pressured Los Angeles County to remove a tiny cross from its county seal. In 2014, the County restored the cross.

The ACLU, with an Orwellian fixation to expunge official public acknowledgement of the state's Christian founding, brought a lawsuit, and in 2016, U.S. District Judge Christina A. Snyder ruled to remove the cross.