When I heard that First Lady Melania Trump was going to visit the Washington Monument on its re-opening day this past week, I couldn't help but wonder: Did she see and read about the Laus Deo religious inscription etched upon the capstone replica display, which mirrors the original placed on top of the monument at its completion in 1885? Or was the replica display changed and omitted as it was in 2007?

I thought, is it possible that, during the Washington Monument's restoration and renovation over the past years, government officials might again have covertly covered up that sacred Latin inscription so visiting guests couldn't see and learn about it?

In 2007, our California pastor made a remarkable discovery in the Washington Monument that set off a media firestorm and patriot hailstorm on the U.S. Dept. of Interior's government officials who oversee the famous obelisk memorial to America's first president. He learned that the aluminum capstone replica display inside the museum at the top of the monument had been changed sometime between 2000 and 2007 to remove any reference to God.

The Latin words "Laus Deo," which mean "Praise [be] to God," are inscribed on the original capstone atop the monument, but they had been removed and hidden in the capstone's replica display. Their description was not only omitted from the museum display, but the side of the replica capstone inscribed with the Latin words was also pushed against the wall so visitors couldn't see it. (You can watch our pastor describe the blatant secular progressive revisionist story in his three-minute presentation)

Below are original photos taken by our pastor that clearly show the monumental omission that took place to the capstone replica display between its 2000 and 2007 displays (notice the position and length of description was changed): 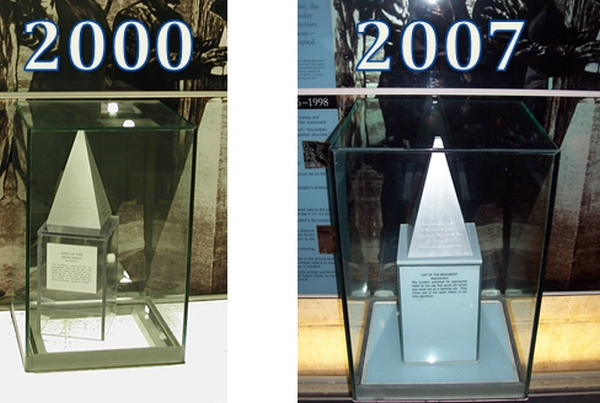 Even blurred, a close-up comparison of the wording on the display cases from 2000 and 2007 clearly show the Laus Deo description deletion. With its actual etching side of the replica capstone pushed against the wall, there was no way for visitors to learn about it.

WND and Fox News immediately ran national news stories on the "Monumental Omission," and we heard that over 100,000 patriots called the Dept. of Interior in a 24-hour period to complain. By the time Fox sent a news crew up inside the Washington Monument the next day, some government officials already replaced a corrected version of the display sign that contained the words and description of "Laus Deo" as well as pulled out the replica capstone from the wall so visitors could see the Latin inscription! What a strange coincidence they could create and change the sign so quickly! Officials must have had the new sign locked-n-loaded in the monument's cellar! Even liberal watchdog sites like the liberal Snopes had to admit these secular progressive and historical revisions were true. 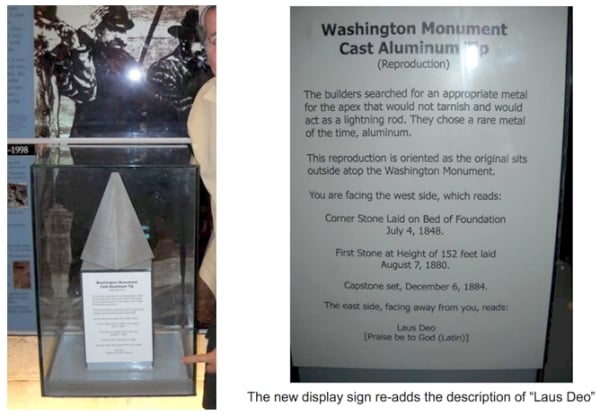 Whatever the government's justification for such blatant sacred omissions – and they had a few doozies – from 2008 onward visitors could finally see the truths of the godly heritage of the Washington Monument via the new Laus Deo capstone replica description and display. But that would all be short-lived.

A few years later, an earthquake rocked and cracked the monument and an aged-elevator cord snapped, so officials shut down the Washington Monument to visitors for most of the last decade because of its disrepair. Years were spent in repairing and restoring inside and outside, when the monument was finally reopened this past week.

So you can see why I curiously watched various news media's coverage of First Lady Melania Trump's visit to the monument's opening day this past week: I wanted to see if I could notice any changes to the new capstone replica display. Unfortunately, no news agency I watched covered her visit inside the monument – only at its base.

But then, Eureka! I discovered a video edition of "What's Inside?" that merely flashed some footage passing by what appeared to be a new capstone replica display. Here is a still photo of that moment in the broadcast. You can see the aluminum capstone replica standing on top of its encased stand, but do you notice anything different?

A video photo of the new capstone replica display as captured in the episode of "What's Inside?" 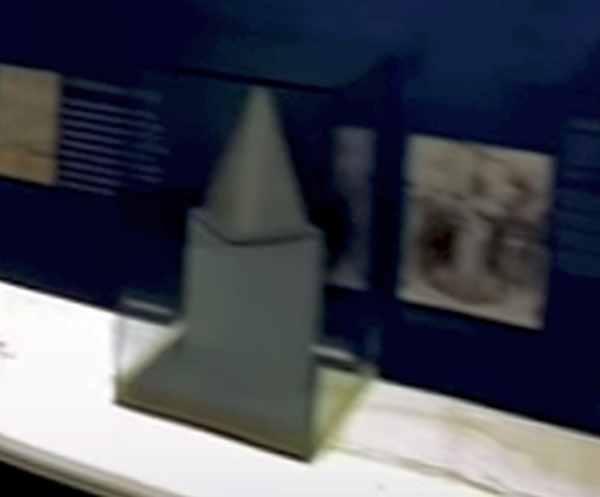 A close-up photo of the new aluminum capstone replica display in the recently opened and restored Washington Monument. Does it contain a description of the Laus Deo etching on the capstone?

The capstone replica display in the video photo is too distant and blurred to see what's written on the wall behind it, but what's visually apparent seems to be the absence of any plaque description on the front case of the capstone display as there was in 2002 and 2007. Do you see any black descriptive wording on or in the case as in those previous years?

Have Washington Monument officials again omitted the Laus Deo description? Or is it there, possibly on the new wall display behind it? Notice the capstone replica is slightly turned so one could possibly see the Laus Deo etching on the backside if they crouch down and press their head against the wall. But is there any description of it anywhere on the new display? Of the four sides of the aluminum capstone's various inscriptions thanking construction crews, etc., why does Laus Deo have to face the wall? If it must, why not move it out from the wall so that people can comfortably see the etching of Laus Deo without cumbersome effort?

If I had a hotline to the White House, I'd call the First Lady today and ask what she saw. But I'm looking to patriots who are living in or visiting the Washington Monument in the near future to take a closer look, and assure the religious heritage of the obelisk's capstone is clearly conveyed for guests to learn about. Especially important to me are the tens of thousands of students from across the country who will come hundreds and even thousands of miles to learn about the Washington Monument's real and religious origins.

Our concern for passing down to our posterity the truths of American history – including its godly or religious heritage – is why famous American founder and educator Noah Webster rightly admonished: "The education of youth should be watched with the most scrupulous attention. … [It] lays the foundations on which both law and gospel rest for success."

For more on the religious history of landmark sites in our nation's capital, I recommend New Gingrich's third edition of "Rediscovering God in America: Reflections on the Role of Faith in Our Nation's History and Future." I also wrote at length about the "monumental omission" and other religious revisionism across the country in my New York Times bestseller, "Black Belt Patriotism." I also encourage you to visit the amazing new six-story Bible Museum in Washington D.C., which includes a high-tech cinematic aerial ride around the U.S. Capital and its religious history. Interesting to note, our pastor ended up righting the revisionist wrongs at many other historic places like the Jamestown settlement, Independence Hall and even the Supreme Court. You can learn about his other revisionist work at National Treasures or listen to his radio interviews with historians David Barton and Rick Green on his WallBuilders Live episodes.

Chuck Norris
Chuck Norris is the star of more than 20 films and the long-running TV series "Walker, Texas Ranger." His latest book is entitled The Official Chuck Norris Fact Book." Learn more about his life and ministry at his official website, ChuckNorris.com.
Restoring value for all human life, from conception to the grave
What I loved and miss most about my friend Ronald Reagan
How we can see fewer police officers killed in 2022
My 2022 health advice for Biden and all Americans
Most Americans don't believe Jesus existed before the manger
See more...