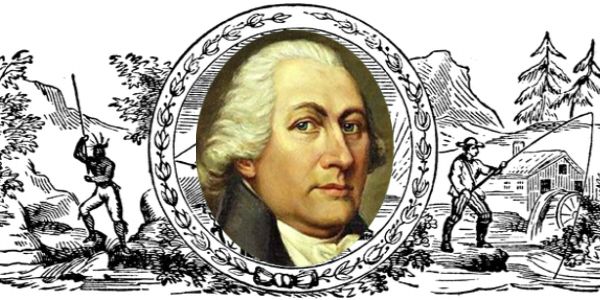 John Langdon was born in Portsmouth, New Hampshire, in 1741 and grew up as a member of the North Congregational Church, where his distant relative, future Harvard President Rev. Samuel Langdon was pastor from 1747-1774.

Other notable individuals who had worshiped at the North Congregational Church include:

At the age of 22, John Langdon became a sea captain, like his older brother Woodbury Langdon. They sailed back and forth to the West Indies for trade.

Then the British imposed trade restrictions with the Revenue Act of 1764 and the Stamp Act of 1765. John Langdon sailed back into Portsmouth harbor, the British seized his cargo of sugar and rum, similar to how the British in Boston's harbor seized John Hancock's ship Liberty.

By this time, tea from China was the most popular drink in the British Empire, out-selling coffee and chocolate, as tea was purported to have health benefits. The British East India Company had a monopoly on the tea trade, but was required to sell it exclusively in London, where it paid a high tax. Merchants bought the tea in London and then resold it in the American colonies at an even higher price. To avoid the high price, colonists bought 85 percent of their tea smuggled in by Dutch merchants, estimated at 900,000 lbs. a year.

The Townsend Acts of 1767 bailed out the debt-ridden British East India Company by allowing it to sell its tea directly to America at a cheaper price, but it would legitimize Britain's ability to directly tax the colonies, which was a hotly contested issue since the colonies had no representation in the British Parliament.

To compound the issue even further, the British Parliament passed the Tea Act of 1773 , which provoked the Boston Tea Party, Dec. 16, 1773. It also provoked the Annapolis Tea Party and the burning of the ship Peggy Stewart. New Hampshire citizens refused to allow any British ship carrying tea from landing in the Portsmouth harbor.

In 1775, John Langdon was elected a delegate to the Continental Congress, as was later his brother, Woodbury Langdon. In 1776, John Langdon oversaw the building of American warships, including the Ranger, which he recommended be captained by John Paul Jones. John Langdon was elected Speaker of the New Hampshire House, 1776-1782, where he championed fiscal responsibility, recommending the use of silver and gold instead of paper currency.

When the British recaptured Fort Ticonderoga, Speaker John Langdon reportedly told the legislature: "I have 3,000 dollars in hard money. I will pledge the plate in my house for 3,000 more, and I have 70 hogsheads of Tobago rum which shall be disposed of for what it will bring. These and the avails of these are at the service of the state. If we defend our homes and our firesides, I may get my pay; if we do not defend them, the property will be of no value to me."

John Langdon built seven ships with which he raided British ships. As a colonel, John Langdon led a voluntary company of soldiers to fight at Saratoga where they witnessed the surrender of British General Burgoyne. John Langdon commanded soldiers in 1778 with John Sullivan's army in Rhode Island.

In 1784, John Langdon was a state senator, and in 1785 he was elected president (governor) of New Hampshire. As president of New Hampshire, John Langdon issued a Proclamation for a Day of Public Fasting and Prayer, Feb. 21, 1786: "That the citizens of this State may with one heart and voice, penitently confess their manifold sins and transgressions, and fervently implore the Divine benediction, that a true spirit of repentance and humiliation may be poured out upon all orders and degrees of men, and a compleat and universal reformation take place ... that He would be pleased to bless the great Council of the United States of America, and direct their deliberations to the wise and best determinations ... and above all, that He would rain down righteousness upon the earth, revive religion, and spread abroad the knowledge of the true GOD, the Saviour of man, throughout the world."

Many states had annual days of fasting. Governor John Langdon decided to temporarily postpone the convention and schedule New Hampshire's annual Fasting Day, a date fixed by the governor, to be observed April 10, 1788: "to be ... kept as a day of fasting of humiliation and prayer."

After the Day of Fasting, New Hampshire reconvened its ratifying convention on June 18, 1788. After hearing Harvard President Rev. Samuel Langdon's address "The Republic of the Israelites an example to the American States" the New Hampshire delegates voted to ratify the U.S. Constitution, June 21, 1788.

New Hampshire was the ninth state to ratify the U.S. Constitution. This fulfilled the necessary requirement of two-thirds of the states, and thus the Constitution officially went into effect.

After ratifying the U.S. Constitution, the delegates of New Hampshire thanked God: "Acknowledging with grateful hearts the goodness of the Supreme Ruler of the Universe in affording the People of the United States in the Course of his Providence an Opportunity, deliberately & peaceably without fraud or surprise of entering into an explicit and solemn compact with each other by assenting to & ratifying a new Constitution, in order to form a more perfect Union, establish justice, insure domestic tranquility, provide for the common defense, promote the general welfare and secure the Blessings of Liberty to themselves & their Posterity – Do, In the Name & behalf of the People of the State of New-Hampshire assent to & ratify the said Constitution for the United States of America. ..."

The delegates of New Hampshire continued, recommending that the new federal government should be restricted: "And as it is the Opinion of this Convention that certain amendments & alterations in the said Constitution would remove the fears & quiet the apprehensions of many of the good People of this State & more Effectually guard against an undue Administration of the federal government. ... That all Powers not expressly & particularly Delegated by the aforesaid Constitution are reserved to the several states to be, by them Exercised. ... That there shall be one Representative to every 30,000 persons. ... Nor shall Congress in any Case make regulations contrary to a free and equal Representation. ... That Congress do not lay direct Taxes. ... That no standing Army shall be Kept up in time of Peace ... nor shall Soldiers in Time of Peace be quartered upon private Houses without the consent-of the Owners. ... Congress shall make no Laws touching Religion, or to infringe the rights of Conscience. ... Congress shall never disarm any Citizen. ..."

Governor John Langdon wrote to George Washington: "I have the great pleasure of informing your Excellency that this state has this day adopted the federal constitution ... thereby placing the Key Stone in the great arch."

In 1788, John Langdon was elected New Hampshire's first U.S. Senator where he traveled to the U.S. Capital in New York City. The U.S. Senate elected him president of the Senate, where he counted the votes of the electoral college where George Washington was elected the first president.

Langdon wrote the letter informing George Washington that he had been elected. On April 30, 1789, John Langdon administered the oath of office to the nation's first Chief Executive, George Washington, and Vice President John Adams.

Returning to New Hampshire, John Langdon was elected governor, where he issued a proclamation, Oct. 10, 1805, acknowledging the nation's victory over the Muslim Barbary Pirates of North Africa: "It has been customary ... to set apart a certain day ... for ... publicly recognizing their dependence upon Almighty God for protection, and that they might express their gratitude to Him for all blessings and mercies received and implore a continuance of them; – I therefore ... appoint Thursday, the 28th day of November ... as a day of public Thanksgiving and Prayer ... in praising and adoring Almighty God, and in offering up our thanks to Him as the great author of every good and perfect gift. ... For the termination of our contest with one of the African powers; the liberation of our fellow-citizens from bondage. ..."

Governor Langdon continued: "But above all, for the inestimable blessings of the Gospel of Peace and Salvation, the means of grace and hopes of future glory, through the merits of a crucified Savior. ... That he would bless the means used for the promulgation of his word, and make pure religion and morality more and more abound."

In 1797, John Langdon helped save an escaped slave, Oney Judge, from being taken by slave-catchers. Oney Judge learned to read and became a Christian.

In retirement, John Langdon was visited in 1817 by President James Monroe, as the newspaper reported: "While at Portsmouth, the president spent that part of the Sabbath which was not devoted to public divine service, with that eminent patriot and Christian, John Langdon. His tarry ... was probably longer than the time devoted to any individual in New England."

While governor, John Langdon had issued a proclamation, Oct. 21, 1785: "It therefore becomes our indispensable Duty, not only to acknowledge, in general with the rest of Mankind, our dependence on the Supreme Ruler of the Universe, but as a People peculiarly favoured, to testify our Gratitude to the Author of all our Mercies, in the most solemn and public manner. ... To celebrate the Praises of our divine Benefactor; to acknowledge our own Unworthiness, confess our manifold Transgressions, implore his Forgiveness, and intreat the continuance of those Favours which he had been graciously pleaded to bestow upon us; That he would ... bless our Seminaries of Learning, and spread the Gospel of his Grace over all the Earth."