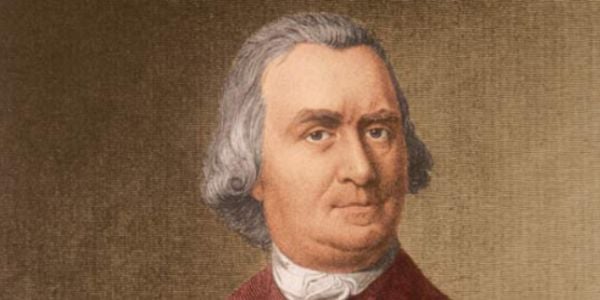 Samuel Adams, born Sept. 27, 1722, was known as "The Father of the American Revolution." Spreading the slogan "No taxation without representation," Sam Adams instigated the Stamp Act Riots in 1765. In 1770, after the Boston Massacre, where British soldiers fired into a crowd, killing five and wounding six, Sam Adams spread Revolutionary sentiment with his network of Committees of Correspondence.

When it first met, Sept. 6, 1774, he proposed that it be opened with prayer, despite the delegates being of different Christian denominations which did not always get along: "It did not become men, professing to be Christian men, who had come together for solemn deliberation in the hour of their extremity, to say there was so wide a difference in their religious belief that they could not, as one man, bow the knee in prayer to the Almighty, whose advice and assistance they hoped to obtain."

Sam Adams' younger cousin was John Adams, who was also a delegate to the Continental Congress.

John Adams described the scene to his wife, Abigail: "When the Congress met, Mr. Cushing made a motion that it should be opened with Prayer. It was opposed by Mr. Jay of New York, and Mr. Rutledge of South Carolina because we were so divided in religious sentiments, some Episcopalians, some Quakers, some Anabaptists, some Presbyterians, and some Congregationalists, that we could not join in the same act of worship. Mr. Samuel Adams arose and said that he was no bigot, and could hear a Prayer from any gentleman of Piety and virtue, who was at the same time a friend to his Country. He was a stranger in Philadelphia, but had heard that Mr. Duché (Pastor of Christ Episcopal Church, Philadelphia), deserved that character and therefore he moved that Mr. Duche', an Episcopal clergyman might be desired to read Prayers to Congress tomorrow morning. The motion was seconded, and passed in the affirmative."

In 1775, British General Thomas Gage tried to shut down all the town meetings in Massachusetts. He attempted to intimidate Samuel Adams into giving up.

Sam Adams dictated a message to be delivered to General Gage: "I trust I have long since made my peace with the King of Kings. No personal consideration shall induce me to abandon the righteous cause of my country. Tell Governor Gage it is the advice of Samuel Adams to him no longer to insult the feelings of an exasperated people."

Paul Revere rode to warn the colonists that British General Thomas Gage was marching with 700 soldiers on April 18, 1775, to take the colonists' guns and arrest John Hancock and Samuel Adams. The colonists resisted in the Battles of Lexington and Concord.

When Sam Adams signed the Declaration of Independence, 1776, he stated: "We have explored the temple of royalty, and found that the idol we have bowed down to, has eyes which see not, ears that hear not our prayers, and a heart like the nether millstone. We have this day restored the Sovereign, to whom alone all men ought to be obedient. He reigns in Heaven. ..."

Adams continued: "There are instances of, I would say, an almost astonishing Providence in our favor; our success has staggered our enemies, and almost given faith to infidels; so that we may truly say it is not our own arm which has saved us. The hand of Heaven appears to have led us on to be, perhaps, humble instruments and means in the great Providential dispensation which is completing. ..."

He concluded: "We have fled from the political Sodom; let us not look back. ... We may, with humility of soul, cry out, 'Not unto us, not unto us, but to thy Name be the praise.' ... Providence is yet gracious unto Zion, that it will turn away the captivity of Jacob."

Sam Adams wrote in "The Rights of Colonists," 1772: "Among the natural rights of Colonists are: First, a right to life; secondly, to liberty; thirdly, to property; together with the right to defend them. ... The supreme power cannot justly take from any man any part of his property without his consent."

In "The Rights of the Colonists," section "The Rights of the Colonist as Men," Samuel Adams wrote: "In regards to religion, mutual toleration in the different professions thereof is what all good and candid minds in all ages have ever practiced. ... It is now generally agreed among Christians that this spirit of toleration, in the fullest extent consistent with the being of civil society, is the chief characteristical mark of the church."

On April 30, 1776, Samuel Adams wrote to John Scollay of Boston: "Revelation assures us that 'Righteousness exalteth a nation.' Communities are dealt with in this world by the wise and just Ruler of the Universe. He rewards or punishes them according to their general character. ... Public liberty will not long survive the total extinction of morals. 'The Roman Empire,' says the historian, 'must have sunk, though the Goths had not invaded it. Why? Because the Roman virtue was sunk.' Could I be assured that America would remain virtuous, I would venture to defy the utmost efforts of enemies to subjugate her."

Samuel Adams was elected as governor of Massachusetts, and wrote to James Warren, Feb. 12, 1779, warning: "A general dissolution of the principles and manners will more surely overthrow the liberties of America than the whole force of the common enemy. While the people are virtuous they cannot be subdued; but once they lose their virtue, they will be ready to surrender their liberties to the first external or internal invader."

Samuel Adams warned: "Neither the wisest constitution nor the wisest laws will secure the liberty and happiness of a people whose manners are universally corrupt."