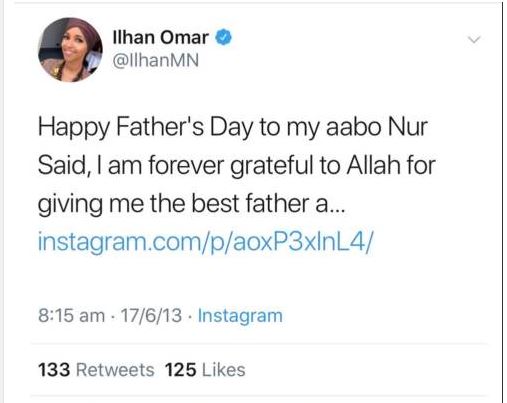 Ilhan Omar says her father's name is Nur Omar Mohamed, but in an old Father's Day tweet that she deleted Tuesday, she said his name is Nur Said.

That would mean not only that her name isn't Ilhan Omar, but that the evidence continues to mount that the man she married named Ahmed Nur Said Elmi was her brother.

She wrote in the 2013 Twitter post: "Happy Father’s Day to my aabo Nur Said, I am forever grateful to Allah for giving me the best father a…"

The tweet was spotlighted Monday night by Twitter member Shaikh Tawhidi, the "Imam of Peace," who pointed out the typical convention for surnames in many Islamic nations is the name of the father, the Daily Caller reported.

Your father is Nur Said?
Not: Nur Omar Mohamed?

And you married Ahmed Nur Said,

You married your brother.

(Most Americans don’t know that in most Muslim countries, the surname is actually the father’s name)

One America News reporter Jack Posobiec archived the tweet before it was deleted.

President Trump in July repeated the claim that Omar's union with Elmi was illegal immigration fraud because he is her brother. Omar has called the allegation "absolutely false and ridiculous."

However, as WND reported, investigative reporter David Steinberg, PowerLine blogger David Steinberg and Alpha News reporter Preya Samsundar have published over the past three years substantial evidence that Omar married her brother to defraud U.S. immigration and perjured herself eight times in her divorce statement.

Omar says she married Ahmed Hirsi, the father of her three children, in an Islamic ceremony in 2002, but six years later they "reached an impasse in our life together" and divorced. In 2009, she legally married Elmi. She says she reconciled with Hirsi in 2012. But she didn't divorce Elmi until 2017, after evidence emerged in her runs for office that Elmi is her biological brother.

DailyMail.com reported in July that the congresswoman had separated from Hirsi. Last month, in a divorce filing, a Washington, D.C., mother charged her political consultant husband, Tim Mynett, had left her for Omar in April. Records show Omar paid Mynett and his E. Street Group approximately $230,000 through her campaign since 2018 for fundraising consulting, digital communications, internet advertising and travel expenses.

The Daily Caller noted that the one person Omar has publicly recognized as a sibling in America is Sahra Noor. Sahra has identified Nur Said as her father, according to screenshots published in 2016 by Preya Samsundar.

"The evidence is overwhelming Rep. Omar may have violated the law and House rules," said Judicial Watch President Tom Fitton. "The House of Representatives must urgently investigate and resolve the serious allegations of wrongdoing by Rep. Omar."