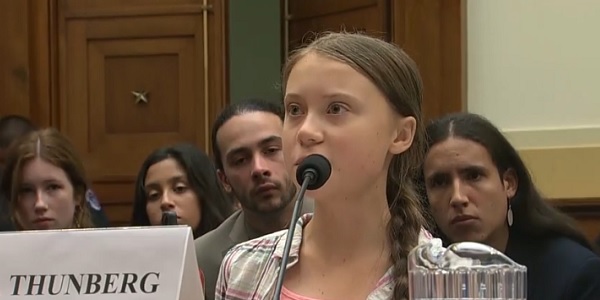 The left has gone ballistic over criticism that teen climate-change activist Greta Thunberg resembles some of the Nazi propaganda that was used to turn the world against Jews more than half a century ago.

The Swedish 16-year-old, who is skipping school for a year to to protest climate change, charged in a speech at the United Nations on Monday that the adults in the room were stealing her dreams and her childhood.

"People are suffering. People are dying. Entire ecosystems are collapsing," she claimed. "We are in the beginning of a mass extinction."

See a compilation of her statements from Ryan Saavedra:

Author and filmmaker Dinesh D'Souza noted her resemblance to children exploited by the Nazis to convey their messages.

On Twitter, he said: "Children – notably Nordic white girls with braids and red cheeks – were often used in Nazi propaganda. An old Goebbels technique! Looks like today's progressive Left is still learning its game from an earlier Left in the 1930s." 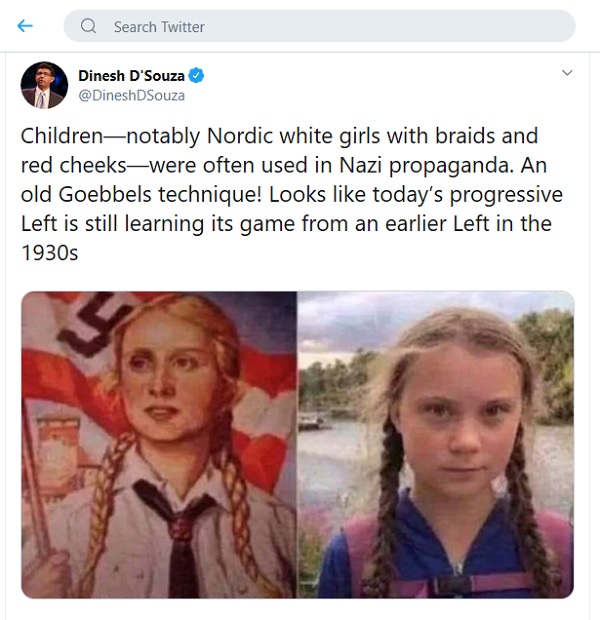 "Do us a favor, blow your brains out. And please have someone post the vid," wrote Max Keiser.

Cassy Stowe wrote: "Amazing that so many have reported this tweet and it STILL hasn't been taken down."

Caroline wrote: "Take down this tweet. You are insane. She is a 16 year old child, with Asberger's syndrome, she's not part of propaganda."

The comments that followed Saavedra's video offered a different perspective.

"Should have stopped at 'I shouldn't be up here," wrote Tony Po."

"'I should be in school' Then go to school," added Samantha Garber

Niko wrote: "I see they've changed the propaganda to Climate Action (from Protect the Ozone, the Global Warming, Global Cooling, to Climate 'Change' – just in my lifetime). So is it going to be colder? Warmer? Moderate to fine? And Action against what exactly?"

Her performance wasn't so far from propaganda, another said.

Kimann said: "Child abuse to manipulate a little girl to this extent & then use her as a human billboard for childhood angst. There is nothing she does/can do that is not planned & brought to fruition by her adult controllers & so-called caregivers."

"This girl has anger problems. She has been trained to be a fear monger," added Alexander Padilla. "Regardless of the issue, I do not want to be lectured by a kid."

Thunberg's rant was littered with insults, including:

"The bad people in this equation are all those who have instilled this young woman with fear and are using her as a human shield – and her parents for letting it happen."

Thunberg's warnings echo those of socialist U.S. Rep. Alexandria Ocasio-Cortez, D-N.Y., who said that in a few years Miami would disappear because of global warming and that the world has only about a dozen years left.

But the Competitive Enterprise Institute reported "doomsayers have been predicting climate and environmental disaster since the 1960s," and none have come true.

CEI pointed out that while the predictions grab media headlines, "the failures are typically not revisited."

The Los Angeles Times reported in 1967, for example, that Stanford University's Paul Ehrlich warned it already was too late for the world "to avoid a long period of famine."

Ehrlich, a "population biologist," had several others. In 1969 he warned that by 1989, "everyone will disappear in a cloud of blue steam."

Also in 1970, NASA's S.I. Rasool said that over the next five to 10 years, there would be "such a temperature decrease [that it] could be sufficient to trigger an ice age."

Brown University scientists in 1972 wrote to the president that "very soon" there would be "a global deterioration of climate, by order of magnitude larger than any hitherto experienced by civilized mankind."

They looked at the bottom of the ocean to determine that.

WND long has reported on such failures and admissions about the political and financial agenda behind the activists pushing the idea of global cooling, global warming and climate change.

Al Gore, for example, once admitted the campaign is "torqued up."

He was discussing a warning from the U.N.'s Intergovernmental Panel on Climate Change that horrible things are ahead for humanity if it continues to use carbon fuels.

PBS host Judy Woodruff noted the panel members were "painting a much more alarming picture of what we face than we had previously known."

Gore, the vice president under Bill Clinton and a failed Democratic nominee in 2000, said, "The language that the IPCC used in presenting it was torqued up a little bit, appropriately – how [else] do they get the attention of policy-makers around the world?"

Scientist Art Robinson's The Petition Project gathered the signatures of at 31,487 scientists who agree that there is "no convincing scientific evidence that human release of carbon dioxide, methane, or other greenhouse gases is causing or will, in the foreseeable future, cause catastrophic heating of the Earth's atmosphere and disruption of the Earth's climate."

"Moreover, there is substantial scientific evidence that increases in atmospheric carbon dioxide produce many beneficial effects upon the natural plant and animal environments of the Earth."