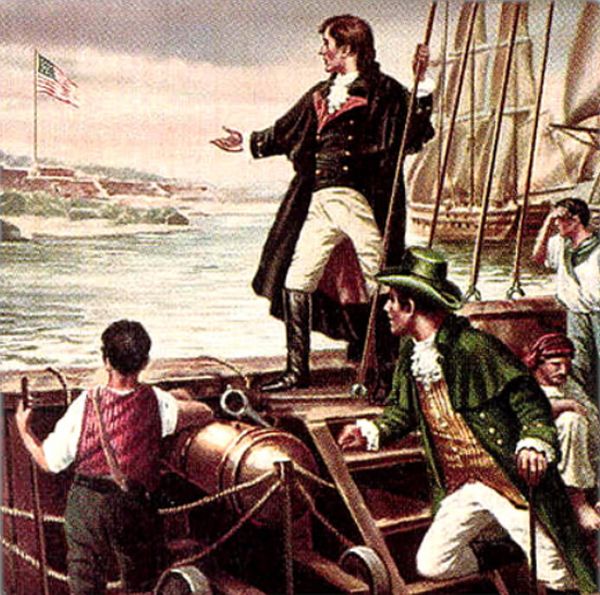 Britain had the largest global empire in world history, controlling 13 million square miles – almost a quarter of the Earth's land – and nearly half a billion people – one-fifth of the world's population at that time. Out of nearly 200 countries in the world, only 22 were never controlled or invaded by Britain.

As the War of 1812 progressed, British soldiers marched toward Baltimore. On their way, they captured an elderly physician of Upper Marlboro, Dr. William Beanes. The town feared Dr. Beanes would be hanged, so they asked attorney Francis Scott Key to sail with Colonel John Skinner under a flag of truce to the British flagship Tonnant in order to arrange a prisoner exchange.

President James Madison, known as the "Chief Architect of the Constitution," had declared a National Day of Prayer, July 9, 1812, stating: "I do therefore recommend ... rendering the Sovereign of the Universe ... public homage ... acknowledging the transgressions which might justly provoke His divine displeasure ... seeking His merciful forgiveness ... and with a reverence for the unerring precept of our holy religion, to do to others as they would require that others should do to them."

On July 23, 1813, Madison issued another Day of Prayer, referring to: "religion, that gift of Heaven for the good of man."

During the Battle of Fort McHenry, the citizens of Baltimore extinguished every light in every window so that the British would not be able to use them to get their aim. A thunderstorm providentially blew in and rained so hard the ground was softened, allowing most of the cannon balls to sink in the mud.

O thus be it ever when free men shall stand,

Between their loved home and the war's desolation;

Blest with victory and peace, may the Heaven-rescued land,

Praise the Power that hath made and preserved us a nation!

Then conquer we must, when our cause it is just;

And this be our motto 'In God is our trust'!

And the Star Spangled Banner in triumph shall wave,

Over the land of the free and the home of the brave!

Americans honor the flag, as it is the symbol of the "republic for which it stands." A "republic" is where the people are king, ruling through their representatives – their public servants. When someone dishonors the flag, what they are saying is they no longer want to be king, they are protesting this system where people participate in ruling themselves.

Francis Scott Key had actually reworked a previous song he had written nine years earlier to celebrate the American victory over the Muslim Barbary pirates titled "When the Warrior Returns from Battle Afar," 1805:

In the conflict resistless, each toil they endured,

Till their foes shrunk dismay'd from the war's desolation,

And pale beam'd the Crescent, its splendour obscured

By the light of the Star-Spangled flag of our nation.

Where, each radiant star gleam'd a meteor of war,

And the turban'd heads bow'd to the terrible glare;

Then mix'd with the olive the laurel did wave,

And form'd a bright wreath for the brows of the brave.

Muslim pirates had enslaved an estimated 180 million Africans and over a million Europeans. Virtually every African slave brought to America had been purchased from Muslim slave markets. In a twist of irony, those intent on removing symbols and reminders of past groups which participated in enslaving Africans must, to be consistent, also remove Islamic symbols, as Muslim slaves markets sold Africans.

After the Battle of Fort McHenry, President James Madison proclaimed, Nov. 16, 1814: "The National Legislature having by a Joint Resolution expressed their desire that in the present time of public calamity and war a day may be recommended to be observed by the people of the United States as a day of public humiliation and fasting and of prayer to Almighty God for the safety and welfare of these States, His blessing on their arms, and a speedy restoration of peace ... I ... recommend ... offering ... humble adoration to the Great Sovereign of the Universe, of confessing their sins and transgressions, and of strengthening their vows of repentance ... that He would be graciously pleased to pardon all their offenses against Him ... that He would in a special manner preside over the nation ... giving success to its arms."

Remembering American history is necessary to counteract the socialist/communist tactic of deconstruction, which is:

In 1820, a U.S. revenue cutter captured the slave ship Antelope off the coast of Florida with nearly 300 African slaves. Francis Scott Key was the defense attorney for the Africans, many of whom were just young teenagers. Spending his own money, Key fought to free the slaves in an expensive legal battle which dragged on for seven years.

Arguing their case before the Supreme Court in 1825, Francis Scott Key, as recorded by Henry S. Foote: "... greatly surpassed the expectations of his most admiring friends ... Key closed with ... an electrifying picture of the horrors connected with the African slave trade."

Jonathan M. Bryant wrote in "Dark Places of the Earth: The Voyage of the Slave Ship Antelope" (2015): "Most startling of all, Key argued ... that all men were created equal. ... If the United States had captured a ship full of white captives, Key asked, would not our courts assume them to be free? How could it be any different simply because the captives were black? ... Slavery was a dangerously hot subject, but Francis Scott Key stepped deliberately into the fire."

Bryant continued: "Key had unleashed all of his rhetorical weapons. ... This was a case he believed in and had worked personally to bring before the Supreme Court. The Antelope was a Spanish slave ship that had been captured by privateers and then seized by a United States Revenue Marine cutter off the coast of Florida. ..."

Jonathan M. Bryant continued: "Using clear precedent, poetic language, and appeals to morality, Francis Scott Key argued that the hundreds of African captives found aboard the Antelope should be returned to Africa and freedom. United States law demanded it, he said. The law of nations demanded it, he said. Even the law of nature demanded it. Key looked into the eyes of the six justices sitting for the case, four of whom were slave owners, and announced that 'by the law of nature, all men are free.'"

Considered to be one of its many shameful decisions, the Supreme Court sadly chose to define slaves as property. Only a portion of the slaves were returned to Africa where they founded the colony of New Georgia in Liberia. Key raised $11,000 to help the Africans.

He told the Washington Society of Alexandria, March 22, 1814: "The patriot who feels himself in the service of God, who acknowledges Him in all his ways, has the promise of Almighty direction, and will find His Word in his greatest darkness, 'a lantern to his feet and a lamp unto his paths.' ... He will therefore seek to establish for his country in the eyes of the world, such a character as shall make her not unworthy of the name of a Christian nation."

Rep. John Randolph wrote to Francis Scott Key, Sept. 7, 1818 (Hugh A. Garland, "The Life of John Randolph of Roanoke, New York": D. Appleton & Company, 1853, Vol. II, p. 99): "I am at last reconciled to my God and have assurance of His pardon through faith in Christ, against which the very gates of hell cannot prevail. Fear hath been driven out by perfect love."

John Randolph wrote to Francis Scott Key, May 3, 1819, (Hugh A. Garland, "The Life of John Randolph of Roanoke, New York": D. Appleton & Company, 1853, Vol. II, p. 106): "I still cling to the cross of my Redeemer, and with God's aid firmly resolve to lead a life less unworthy of one who calls himself the humble follower of Jesus Christ."

In his will of 1822, John Randolph also provided money for transportation, supplies and the purchase of land for his freed slaves to settle in the free state of Ohio. Each slave above the age of 40 was to receive 10 acres of land. Randolph's Will was challenged in court but after a lengthy battle it was upheld.

The 383 former "Randolph Slaves" arrived in Cincinnati in 1846. They overcame many difficulties and local prejudices, and eventually settled Rossville, Ohio, near the town of Piqua. In Rossville and Piqua, they established Cyrene African Methodist Episcopal Church in 1853, Second Baptist Church in 1857, an African Baptist Church in 1869, and a Jackson African Cemetery in 1866.

From this settlement came some of the first African-Americans to serve in the U.S. military during the Civil War.