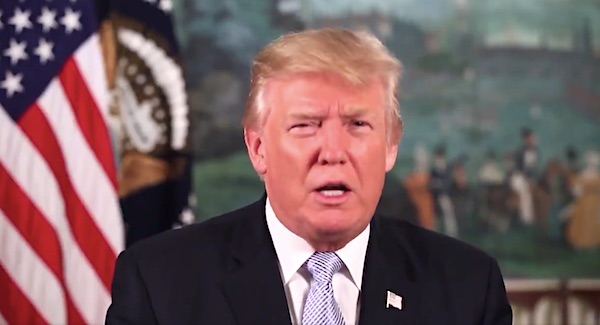 Talk-radio host Rush Limbaugh Wednesday pointed out an accomplishment of the Trump presidency that few are talking about because "it's not good for the Democrats": his appointment of conservative judges.

Among them are the multiple appointments to the left-leaning 9th U.S. Circuit Court of Appeals, a favorite venue for issues promoted by Democrats.

He noted that this week when the court twice overruled a decision by an Obama-appointed judge on the issue of immigration.

The Obama appointee, Jon Tigar, previously issued an injunction nationwide only to see the 9th reverse him. Then he claimed there was new evidence, and he issued the injunction again, only to be reversed again.

Trump's plan was that migrants would be required first to seek asylum outside the United States if they passed through other countries on their way to the U.S.

"The radical transformation of the court, which has 29 seats, is largely the result of Trump's push to nominate conservative judges and bypass traditional consultations with Senate Democrats."

The report said 13 of the 29 seats on the court now are held by GOP-appointed judges. Last year, that number was six. Nationwide Trump appointees to the federal bench number about 100, so far.

The problem of a single judge stopping Trump's national policies with a nationwide injunction repeatedly has come up during the president's first term. Attorney General Bill Barr has said such actions need to stop.

"Republicans in the past had just assumed, okay, that’s the Democrats’ court, that’s the liberals’ court. Whatever they want, they get out there," Limbaugh said. "In other words, Trump is making a huge difference in the judiciary, major difference, particularly in enclaves like the Ninth Circus."

WND reported Trump's ongoing claim that many of the judicial decisions against him have been because of political bias has merit.

Fifty-three of 54 judges appointed by Democratic presidents who ruled on immigration during Trump's first few years in office ruled against the Trump administration.

The Washington Times analyzed the decisions and found that over a two-year period, 53 of 54 judges appointed by Democrats ruled against Trump.

Among Republican-appointed judges, 15 backed the administration, 13 did not.

The report said, "More than 90 percent of Democratic-appointed judges backed the Affordable Care Act, while nearly 80 percent of GOP-nominated judges found legal fault with the 2010 law and the way the previous administration carried it out."