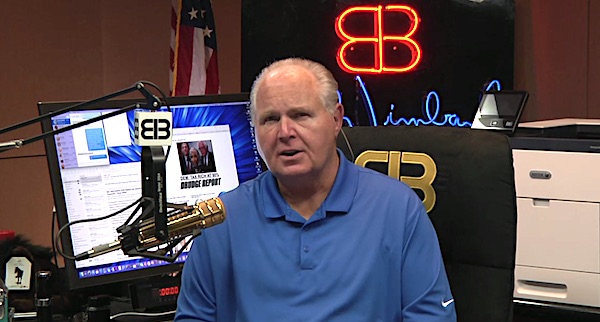 Why are so many Republican members of Congress suddenly quitting their day job?

"I think based on how I have seen Democrats and their operatives act, I think — and that given that nobody, no human being is clean and pure as the wind-driven snow," Limbaugh speculated Wednesday on his national broadcast.

"What I really think is going is that a lot of this is being done as opposition research, dirty tricks, what have you, by Democrats," he explained.

"No human being is free of embarrassments that have accumulated over the course of his or her lifetime."

"Look at the tweets that people write as teenagers that come back five and six years later. ... I think some of that is going on and it's being used to -- dare I say -- blackmail, or threaten."

"It's a lot of power to be giving up," he continued. "It's all happening under the radar."

"There's an exorbitant number of Republicans doing so ... I just have my suspicions about it."

On Wednesday, U.S. Rep. Bill Flores, R-Texas, announced he would retire at the end of his current term, looking forward to spending more time with his family and resuming his private business.

"After much prayer over the past few days and following conversations with my wife, Gina, during that time, I have decided that my current term will be my last," said the 65-year-old Flores, who was first elected in 2010.

Flores is the 15th Republican member of the House, the fifth from Texas, to announce a departure from Congress.

Only three Democrats have made similar announcement to exit the House, which is currently controlled by the Democratic Party.