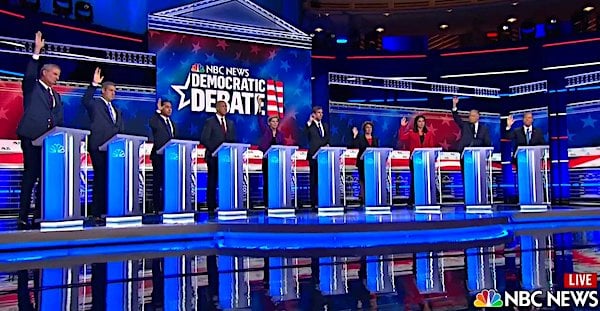 Every presidential hopeful at the Detroit debates in July was an enthusiastic supporter of abortion.

But that doesn't mean organizers had the right to snuff out an opposing view at the two-night event at the Fox Theatre.

That's the premise of lawsuit filed in federal court against the city of Detroit and several officers that challenges their barring of pro-life protesters.

The case was filed in U.S. District Court for the Eastern District of Michigan on behalf of Created Equal and its Founder Mark Harrington. It contends the city and its officers violated the pro-lifers' fundamental rights protected by the U.S. Constitution's First, Fourth and Fourteenth Amendments.

Robert Muise, senior counsel for the American Freedom Law Center, said the "right to freedom of speech enshrined in the First Amendment is not a right to catharsis."

"It is a right to meaningfully express one’s message in order to influence public opinion and to affect public policy," he said. "Not surprisingly, the liberal city of Detroit imposed restrictions that had the intended effect of sanitizing and cleansing the areas immediately in front of and adjacent to the Fox Theatre of any messages that were critical of the Democrat presidential candidates and the positions and policies they supported."

Muise said the restrictions "ensured that our clients' message, specifically including their pro-life signs, would be hidden from the CNN camera shots, the viewers of the debates, the candidates, and those who attended the Fox Theatre for the debates."

"Our Constitution does not permit such treatment," he said.

The lawsuit asserts the city "created and enforced an overbroad and unreasonable 'restricted area' that prevented the pro-lifers from engaging in free speech activity in traditional public forums."

"The restriction was not narrowly tailored to serve a significant government interest, and it did not leave open ample alternative channels of communications to permit the pro-lifers to reach their intended audiences with their message," the complaint says.

Consequently, the city prevented messages the candidates would not like from reaching them.

AFLC explained: "At one point, Mark Harrington and the pro-lifers attempted to get as close to the Fox Theatre as possible without breaching the city's overbroad 'restricted area' by crossing a church parking lot that was being used by multiple media outlets and other protestors. Despite the fact that others were permitted on this property, city police officers stopped Harrington and his colleagues and told them to leave. When Harrington protested, city police officers seized him and put him in handcuffs."

The officers had no probable cause or any other "lawful authority" for seizing him, AFLC said.

"This seizure was an obvious effort to intimidate the pro-lifers into compliance with the city's unlawful speech restrictions."

David Yerushalmi, AFLC co-founder, said that as the presidential race "heats up, there is little doubt that cities across the country, particularly those like Detroit that lean heavily toward the Democrats, will attempt to silence protestors who oppose the radical policies of the Democrat candidates."

"By filing this lawsuit, we hope to not only put a stop to such illicit practices in Detroit, but to send a warning to other cities that might attempt to employ similar police state tactics that we will not stand idly by as you trample on our freedoms," he said.

The lawsuit explains the "restricted area" denied the pro-lifers "access to traditional public forums for their free speech activity."

The pro-lifers were told they would be arrested if they tried to enter the "restricted area."

And they were sent to an area where they could not convey their message, and the officers told them they had no right to do that.

Throughout the episode, including when officers handcuffed Harrington, the officers were making "a subjective determination based on the content and viewpoint of the speaker's message as to whether the speaker would be permitted to enter" a place where the message could be effectively conveyed.

Those who supported the Democratic Party agenda were given closer access, while those who did not were kept further away, the lawsuit explains.

It amounted to content- and viewpoint-based censorship of messages the Democrats would not endorse, the complaint states.