On the anniversary of the death of Mao Zedong, the New York Times recalled its 1976 story describing the mass-murdering communist dictator as "one of history's great revolutionary figures."

A tweet of the story on Monday from the Times archive account drew outrage from many on Twitter who pointed out he was responsible for more than 60 million deaths. 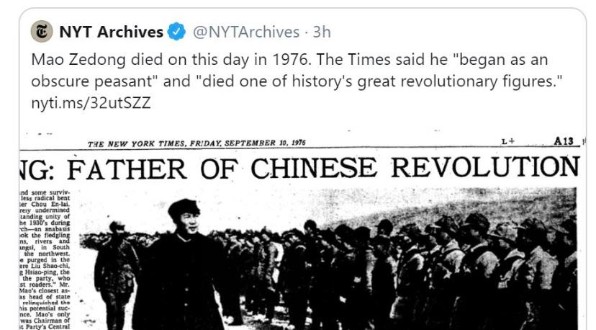 "Anyone who got in his way was done away with -- by execution, imprisonment or forced famine," Edwards wrote.

During the "Great Leap Forward" from 1959 to 1961, the government's takeover of farming caused massive famine resulting in the deaths of 30 million to 40 million people.

The "Great Cultural Revolution" of 1966 to 1976 that followed targeted intellectuals, "revisionists" and other enemies of the state. The communist regime dispatched Red Guard gangs comprised of young men and women between 14 and 21.

"Professors were dressed in grotesque clothes and dunce caps, their faces smeared with ink. They were then forced to get down on all fours and bark like dogs. Some were beaten to death, some even eaten -- all for the promulgation of Maoism," Edwards wrote.

"A reluctant Mao finally called in the Red Army to put down the marauding Red Guards when they began attacking Communist Party members, but not before 1 million Chinese died."

Meanwhile, Mao maintained a system of forced labor camps throughout China through which an estimated 50 million Chinese passed through. An estimated 20 million died as a result of the harsh conditions.

Nevertheless, Edwards pointed out, Mao remains the most honored figure in the Chinese Communist Party.

In Tiananmen Square, a giant portrait of the tyrant looms above the entrance to the Forbidden City, a favorite site of tourists. At the other end of the square, crowds visit his mausoleum.

More than 80 years ago, a New York Times reporter won a Pulitzer Prize for his glowing coverage of the new Soviet Union, which ignored dictator Josef Stalin's forced famine of Ukrainian farmers and other atrocities.

WND reported in 2003 the Pulitzer Prize board concluded in an investigation of the award prompted by Ukrainian groups that Duranty's work "measured by today's standards, falls seriously short," but the board concluded revoking the award "would be a momentous step."

Duranty's writing about Stalin and the Soviet Union has received widespread condemnation for covering up the events leading to the Ukrainian famine of 1932-33, which killed as many as 7 million people.

The memoir "An American Engineer in Stalin's Russia," by Zara Witkins, recounts New York Herald Tribune reporter Ralph Barnes asking Duranty how he was going to report about the Stalin-made famine.

Duranty is said to have replied: "What are a few million dead Russians (Ukrainians) in a situation like this? Quite unimportant. This is just an incident in the sweeping historical changes here. I think the entire matter is exaggerated."

When the Pulitzer panel announced it would not revoke Duranty's prize, Times publisher Arthur Sulzberger stated: "We regret [Duranty's] lapses and we join the Pulitzer board in extending sympathy to those who suffered in the famine."