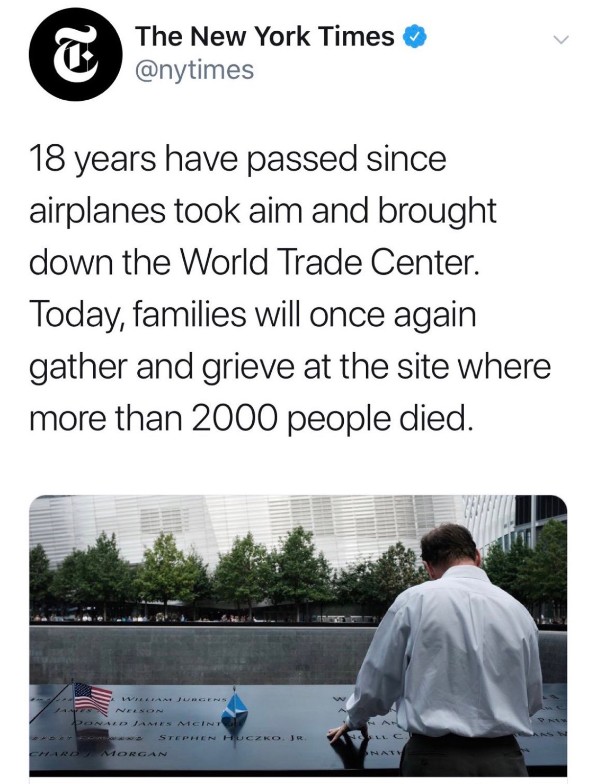 A New York Times tweet Wednesday on the anniversary of the 9/11 attacks suggested that airplanes, with a mind of their own, "took aim" at the World Trade Center and the Pentagon 18 years ago, not Islamic terrorists carrying out a deliberate attack on the United States of America.

"18 years have passed since airplanes took aim and brought down the World Trade Center," the tweet read, reported the Daily Caller.

After considerable criticism on Twitter, the Times deleted the tweet and wrote that the tweet and the story to which it linked had been "edited for clarity."

The article was changed to reflect that terrorists were responsible for killing nearly 3,000 people, the Daily Caller said.

The new tweet reads that "18 years after nearly 3,000 people were lost, families of those killed in the terror attacks will gather at the 9/11 memorial. There will be a moment of silence at 8:46 a.m., then the names of the dead — one by one — will be recited."

Meanwhile, the tendency of the left to obscure the culprits of the 9/11 attack was on display Wednesday at the 9/11 memorial event in New York City.

When Nicholas Haros Jr. stepped up to the microphone to remember his 76-year-old mother who died in the attack, he was wearing a shirt recalling Democratic Rep. Ilhan Omar's remark that 9/11 was about "some people who did something."

Omar was speaking in April at a fundraiser for the Council for American-Islamic Relations, an organization founded in the United States by Hamas operatives.

Haros, the Washington Examiner reported, said there should be no confusion about who attacked the United States on 9/11.

"'Some people did something,' said a freshman congresswoman from Minnesota to support and justify the creation of CAIR," said Haros. "Today I am here to respond to you, exactly who did what to whom.

"Madam, objectively speaking we know who and what was done, there is no uncertainty about that. Why your confusion? On that day 19 Islamic terrorist members of al Qaeda killed over 3,000 people and caused billions of dollars in economic damage. Is that clear?"

Outrage from left and right

The Times' walkback Wednesday was among several in recent weeks in response to criticism largely from the right, on one occasion, and from the left on two others.

On Monday, after outrage on Twitter, the Times deleted a tweet recalling its 1976 story describing the mass-murdering communist dictator Mao Zedong as "one of history's great revolutionary figures."

In August, on two separate occasions, the Times altered a published story in response to complaints from the left on Twitter.

First, it was a headline favorable to President Trump that sparked outrage from readers. The original headline emphasized Trump's denunciation of white supremacy and racism after the mass shootings in El Paso and Dayton, reading "Trump Urges Unity vs. Racism." The editors changed it to "Assailing Hate but Not Guns."

Later in August, readers complained that a Times 10-year retrospective of the tea party failed to cast the movement as racist. The editors apologized on Twitter, saying the story had been "updated" to include "context about attacks on President Barack Obama and racist displays at some Tea Party rallies."