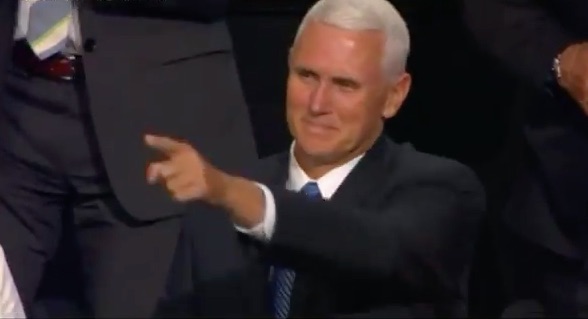 Vice President Mike Pence declared Thursday that under the presidency of Donald Trump, the "era of economic surrender is over."

Addressing the ongoing trade dispute with China, he said that allowing the communist regime's exploitation of the United States is unsustainable, and Washington must fight for fair trade.

"When it comes to China, it's a whole different ballgame," he said at the ninth annual Delivering Alpha Conference in New York City.

"We were on $500 billion trade deficits with China, and we estimate that we lose almost as much in intellectual property theft every single year. I mean, what the president is doing with China is defending the American economy, defending America's interests. And the strong stand that he's taken, we believe, is having an impact on China's economy. There's no question about it."

He was referring to tariffs that could escalate if no deal is reached.

The complaints against China also include its manipulation of its currency and its restrictions on American products.

Pence said that amid the tariffs, deputies in both governments are holding talks over trade.

"But the era of economic surrender is over. And for too long, one administration after another – Republican and Democrat administrations – were willing to accept extraordinary disadvantages to American workers and American jobs in the name of trade with China. And those days are over," he said.

"I mean, it – and we're going to continue to stand strong. I mean, the president has a great relationship with President Xi. I've had discussions with President Xi where I've confirmed that. I've sensed that same rapport that they have.

"But the American people can be confident President Trump is going to continue to stand strong not just to reset the trading relationship to have China open their markets to the United States, but also to have China finally embrace the international rules of commerce, to protect intellectual property, end forced technology transfer – all the things that have been working against America’s interests, and, frankly, the interests of economies around the world."

There has been concern about the trade fight, since China is a significant purchaser of some American products, like agricultural products. China's tactics have included threatening to stop those purchases, or stopping some.

Pence said the question now is whether or not China wants to make a deal.

"I think – I think we have a sense that China wants to do a deal, we just don't know if they want to do it yet," he said. "So they're – they'll be here; we'll be talking. We'll be exploring it."

The objective, he said, is boosting America's economy and creating more jobs.

"I promise you, President Trump and our negotiations with China, with Japan, with the European Union, with the U.K., once they complete Brexit – it's all going to put American jobs and American workers first," he said.

"I've been in the Oval Office where the president has made it very, very clear to Chinese officials at the very highest level of these negotiations that the structural issues are central."

Other countries have suffered from China's misbehavior, he said.

"And the truth of the matter is, China has not been willing to embrace the international rules of commerce. In fact, they've abused the rules of commerce to their advantage and taken advantage of America and other economies for far too long."

Pence continued: "I promise you this president is going to continue to stand firm until either China decides to embrace the kind of reforms that will respect those international rules and reset our trade relationship, or, as the president said, we believe we're in a very strong position and we'll continue to use access to the most powerful economy in the world to protect American jobs and American workers."