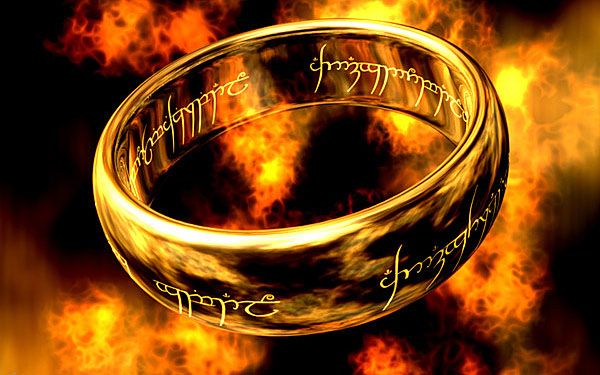 The Lord of the Rings by J.R.R. Tolkien describes man's insatiable lust for "the Ring of Power," as Gandalf exclaimed: "Always remember Frodo, the Ring is trying to get back to its master. It wants to be found."

When Frodo offered the Ring to Gandalf, Gandalf rebuked him, saying: "Don't tempt me Frodo! I dare not take it. Not even to keep it safe. Understand, Frodo. I would use this ring from a desire to do good. ... But through me, it would wield a power too great and terrible to imagine."

In "The Republic" (380 B.C.), Plato retold the ancient myth of the Ring of Gyges, where a shepherd in Lydia, named Gyges, noticed a cave in the fields. Exploring it, he spotted a gold ring on the finger of a former king who had been buried there. Putting the ring on, he discovered it allowed him to become invisible, but the ring also induced him to immoral and ruthless behavior. Gyges stole into the king's palace, seduced the queen, killed the king, and took the throne.

Plato's "Republic," 360b-d (Jowett trans.): "Suppose now that there were ... such magic rings. ... No man can be imagined to be of such an iron nature that he would stand fast in justice. No man would keep his hands off what was not his own when he could safely take what he liked out of the market, or go into houses and lie with any one at his pleasure, or kill or release from prison whom he would, and in all respects be like a god among men. Then the actions of the just would be as the actions of the unjust; they would both come at last to the same point."

Tolkien's "Lord of the Rings" and the Plato's "Ring of Gyges" are metaphors for the unseen magnetic draw for power to be held in the hands of one individual who inevitably becomes corrupted by it.

British statesman Lord Acton wrote to Bishop Creighton, 1887: "Power tends to corrupt and absolute power corrupts absolutely ... the tendency of the certainty of corruption by authority."

Harry S Truman wrote in a personal memorandum, April 16, 1950: "There is a lure in power. It can get into a man's blood just as gambling and lust for money have been known to do."

President William Henry Harrison stated in his inaugural address, March 4, 1841: "The love of power ... When this corrupting passion once takes possession of the human mind, like the love of gold it becomes insatiable. It is the never-dying worm in his bosom, grows ... and strengthens with the declining years of its victim. ... As long as the love of power is a dominant passion of the human bosom ... so long will the liberties of a people depend on their constant attention to its preservation."

In a very real sense, George Washington held the "Ring of Power" twice, and gave it up. The first time was when Washington resigned his commission as general of the Continental Army in 1783. The American-born painter Benjamin West was in England painting the portrait of King George III. The king asked what General Washington planned to do now that he had won the war. Benjamin West replied: "They say he will return to his farm."

The king was in disbelief as Washington's actions were in stark contrast to kings throughout history who killed to get power and killed to keep power.

The second time George Washington gave up power was by insisting on only serving two terms as president. When his second term ended, he returned to his Mount Vernon farm. His example of serving only two terms was followed by every subsequent president, till Franklin D. Roosevelt got himself elected four times.

Realizing the dangers of power becoming entrenched, following FDR, the 22nd Amendment was ratified in 1951, permanently limiting all future presidents to only two terms.

In similar fashion, the world stood amazed as President Washington gave up power. Poet Robert Frost wrote: "I often say of George Washington that he was one of the few men in the whole history of the world who was not carried away by power."

President Andrew Jackson commented on it in 1837: "The Father of his Country in his Farewell Address ... Washington ... seemed to be ... the voice of prophecy, foretelling events and warning us of the evil to come. ... It is well known that there have always been those amongst us who wish to enlarge the powers of the general government ... to overstep the boundaries marked out for it by the Constitution."

Washington warned: "And of fatal tendency ... to put, in the place of the delegated will of the nation, the will of a party; – often a small but artful and enterprising minority. ... They are likely, in the course of time and things, to become potent engines, by which cunning, ambitious, and unprincipled men will be enabled to subvert the Power of the People and to usurp for the themselves the reins of Government; destroying afterwards the very engines which have lifted them to unjust dominion. ..."

Washington warned: "Let me now ... warn you in the most solemn manner against the baneful effects of the spirit of Party. ... This spirit, unfortunately, is inseparable from our nature, having its roots in the strongest passions of the human Mind. ... It is seen in its greatest rankness and is truly their worst enemy. ... Domination of one faction over another, sharpened by the spirit of revenge natural to party dissension, which in different ages and countries has perpetrated the most horrid enormities, is itself a frightful despotism. ..."

Washington warned: "But this leads at length to a more formal and permanent despotism. The disorders and miseries, which result, gradually incline the minds of men to seek security and repose in the absolute power of an Individual ... (who) turns this disposition to the purposes of his own elevation, on the ruins of Public Liberty. ... Ill-founded jealousies and false alarms, kindles the animosity of one part against another, foments occasionally riot and insurrection. ..."

Washington warned: "It opens the doors to foreign influence and corruption, which find a facilitated access to the Government itself through the channels of party passions. Thus the policy and the will of one country, are subjected to the policy and will of another. ..."

Washington warned: "The habits of thinking in a free Country should inspire caution in those entrusted with its administration, to confine themselves within their respective Constitutional spheres; avoiding in the exercise of the Powers of one department to encroach upon another. The spirit of encroachment tends to consolidate the powers of all the departments in one, and thus to create, whatever the form of government, a real despotism. A just estimate of that love of power, and proneness to abuse it, which predominates the human heart is sufficient to satisfy us of the truth of this position. ..."

Washington warned: "The necessity of reciprocal checks in the exercise of political power; by dividing and distributing it into different depositories, and constituting each the Guardian of the Public Weal (Welfare) against invasions by the others, has been evinced (proven) by experiments ancient and modern. ..."

Washington warned: "If in the opinion of the People ... Constitutional powers be in any way particular wrong, let it be corrected by an amendment in the way which the Constitution designates. But let there be no change by usurpation; for though this, in one instance, may be the instrument of good, it is the customary weapon by which free governments are destroyed. The precedent (of usurpation) must always greatly overbalance in permanent evil any partial or transient benefit which the use can at any time yield. ..."

Washington warned: "Avoiding likewise the accumulation of debt, not only by shunning occasions of expense, but by vigorous exertions in time of Peace to discharge the Debts which unavoidable wars may have occasioned, not ungenerously throwing upon posterity the burden which we ourselves ought to bear. ..."

Washington warned: "In the execution of such a plan nothing is more essential than that permanent ... attachments for other (countries) should be excluded. ... The Nation, which indulges towards another ... an habitual fondness, is in some degree a slave ... subservient to projects of hostility instigated by pride, ambition and other sinister and pernicious motives. A passionate attachment of one Nation for another produces a variety of evils. Sympathy for the favorite nation, facilitating the illusion of an imaginary common interest, in cases where no real common interest exist, and infusing into one the enmities of the other, betrays the former into a participation in the quarrels and Wars of the latter, without adequate inducement or justification. ..."

Washington warned: "By exciting jealousy, ill-will, and a disposition to retaliate, in the parties from whom equal privileges are withheld: And it gives to ambitious, corrupted, or deluded citizens ... facility to betray, or sacrifice the interests of their own country, without odium, sometimes even with popularity: gilding with the appearances of a virtuous sense of obligation, a commendable deference for public opinion, or a laudable zeal for public good, the base or foolish compliances of ambition, corruption or infatuation. ..."

Washington warned: "As avenues to foreign influence in innumerable ways, such attachments are particularly alarming to the truly enlightened and independent Patriot. How many opportunities do they afford to tamper with domestic factions, to practice the arts of seduction, to mislead public opinion, to influence or awe the public Councils. ... Against the insidious wiles of foreign influence, (I conjure you to believe me fellow citizens) the jealously of a free people to be constantly awake. ... History and experience prove that foreign influence is one of the most baneful foes of Republican Government. ..."

Washington warned: "Real Patriots, who may resist the intriegues of the favorite (foreign nation), are liable to become suspected and odious; while its tools and dupes usurp the applause and confidence of the people, to surrender their interests. ... In offering to you, my Countrymen these counsels of an old and affectionate friend, I dare not hope they will make the strong and lasting impression, I could wish ... to warn against the mischiefs of foreign Intriegue. ..."

Washington warned: "Of all the dispositions and habits which lead to political prosperity, Religion and Morality are indispensable supports. In vain would that man claim the tribute of Patriotism who should labor to subvert these great Pillars. ... Let us with caution indulge the supposition that Morality can be maintained without Religion. ... Reason and experience both forbid us to expect that national Morality can prevail in exclusion of Religious principle. ... Morality is a necessary spring of popular government. ... Who that is a sincere friend to it can look with indifference upon attempts to shake the foundation?"