"He has talked about white supremacists as fine people," said Democratic presidential candidate Elizabeth Warren. "He’s done everything he can to stir up racial conflict and hatred in this country."

Fellow presidential candidate Robert "Beto" O'Rourke agrees, assuring MSNBC that Donald Trump has made it "very clear" he's not just a "white nationalist" constantly encouraging racism and violence, but that the president himself is a white supremacist, which Merriam-Webster defines as "a person who believes that the white race is inherently superior to other races and that white people should have control over people of other races."

Such an extreme claim about a president of the United States has no precedent in modern history.

Yet Sen. Bernie Sanders agrees that Trump is a white supremacist, Sen. Kamala Harris has described the president as someone who "empowers white supremacists and who condones their behavior," and former Vice President Joe Biden insists Trump "has fanned the flames of white supremacy in this nation."

But wait. It's not just Donald Trump that is irredeemably racist, say today's top Democrats.

America herself, according to virtually every Democratic presidential contender, as well as much of the elite media, is a deeply and malignantly racist nation.

"Systemic racism is a white problem," intones Mayor Pete Buttigieg, who goes so far as to speculate darkly that white supremacy "could be the lurking issue that ends this country."

O'Rourke, who has recently taken to publicly apologizing for being white, indicts America as "clearly an imperfect, unfair, unjust and racist capitalist economy."

Sen. Kirsten Gillibrand, who mercifully just dropped out of the presidential race, denounces the twin evils of the age, "systemic racism" and "white privilege," saying during the first Democratic presidential debate:

So I don't believe that it's the responsibility of Cory and Kamala to be the only voice that takes all of these issues of institutional racism, systemic racism in our country. I think as a white woman of privilege who is a U.S. senator running for president of the United States, it is also my responsibility to lift up those voices that are being listened to. And I can talk to those white women in the suburbs that voted for Trump and explain to them what white privilege actually is, that when their son is walking down a street with a bag of M&Ms in his pocket wearing a hoodie, his whiteness is what protects him from not being shot.

Meanwhile, the New York Times, having disgraced itself by championing for more than two years the debunked Trump-Russia conspiracy theory – which proved to be nothing more than a massive criminal fraud on the part of the Obama White House, corrupt "Deep State" actors and the Hillary Clinton campaign – has moved on to what it calls its next great cause: documenting America's all-pervasive racism. To that end, the Times recently launched "The 1619 Project," which openly aims to entirely "reframe" American history – even changing the date of the nation's founding – and attributing everything that past generations of Americans have considered "great" and "exceptional" about their country to the evils of slavery.

“The 1619 Project," reads the Times' explanatory statement, "is a major initiative from The New York Times observing the 400th anniversary of the beginning of American slavery. It aims to reframe the country’s history, understanding 1619 as our true founding, and placing the consequences of slavery and the contributions of black Americans at the very center of the story we tell ourselves about who we are.”

Responding to New York Times editorial writer Mara Gay's statement that "nearly everything that has made America exceptional grew out of slavery," historian and former House Speaker Newt Gingrich tweeted: "As historian, I am speechless at this ignorance. As American, I am appalled at this ugly revisionism. As media observer, I am not surprised by this vile anti-Americanism."

Added Gingrich, "The New York Times' 1619 Project should make its slogan, 'All the Propaganda we want to brainwash you with.'"

'People will eventually come to believe it'

So America – at least according to the elite media and the entire 2020 Democratic presidential bench – is a uniquely vile, oppressive and bigoted nation, with "institutional" and "systemic" racism coursing through its every institution, from law enforcement to voting, and from education to its "racist capitalist economy." So sick is America, in their estimation, that even white people who have never uttered or thought anything bigoted in their lives are guilty. They reek of the sins of their slaveholding forefathers (even though the vast majority of Americans' ancestors never owned slaves and a good number are descended from those who fought and died to end slavery).

But none of that matters, you see. Somehow, everyone is supposed to believe that even though a majority of American voters twice elected a black man named Barack Obama as their president (despite the fact that blacks comprise barely 12 percent of the population), ours is still somehow a deeply racist nation.

This allegation, repeated literally all day every day by the left, is not only a lie; it is arguably the left's biggest lie about America. Yet as Hitler's propaganda czar Joseph Goebbels affirmed, "If you tell a lie big enough and keep repeating it, people will eventually come to believe it." And Democrats and their allies in the news media are repeating this Big Lie constantly.

The reality, of course, is that in no other nation on earth do skin color and ethnicity mean less than they do in America. It is by far the most diverse, multi-ethnic, open, free and opportunity-laden society in the world today, and in all of history.

Would-be immigrants and asylum seekers from around the globe risk their lives and fortunes to come to the United States more than any other country. Why would they do that, if America really is the oppressive racist hellhole today's Democrats and media cohorts insist it is?

Although an American can go to live and work in, say, Japan, he or she cannot become Japanese. Yet someone from any corner of the earth, of any color or ethnic or religious background, can immigrate to America (legally), apply for citizenship and become an American – every bit as American as one whose ancestors have lived here for ten generations – and enjoy all the rights and privileges that come with being a citizen of this uniquely blessed country.

That is the concept of the great American "melting pot."

This nation's unique genius and blessing has been that the American identity is not racial, but rather based on shared values and loyalties. The "melting pot" has worked because all of these diverse people (most of whom came to America because they wanted to become Americans) eagerly embrace the American spirit, ideals, values, language and love of country.

Again, a major component of America's unique success has been that the American identity has been rooted in something higher and nobler than ethnicity, facial characteristics or skin color. It is rooted, rather, in Western Judeo-Christian moral, ethical, cultural, legal and societal values. Values like the Ten Commandments, limited government and maximum liberty, equality under the law, free enterprise, equal opportunity (not equal results, which is socialism and ultimately tyranny) and love of country.

Nevertheless, the left is ever admonishing us that the biggest problem hurting America's black population today is the "legacy of slavery," and not widespread fatherlessness and the enslaving "Democratic plantation" policies of demagogic politicians.

Slavery was America's first great national sin. But centuries ago slavery was endemic worldwide. America's founders, many of whom opposed slavery, knew they could not fight both the British Empire and slavery at the same time, so they fought Britain for independence while they hoped, prayed and assumed – correctly – that before too very long, slavery would also fall away, which it did. But only after the bloodiest war in American history.

What was unusual about America was not that in past centuries it succumbed to the near-universal societal sin of slavery, but that it sacrificed hundreds of thousands of its own people to eliminate this great sin from the land.

Between the Civil War and the 1960s a century later, segregation and other racial injustices persisted in the U.S. – championed largely by the Democratic Party, which gave us the Ku Klux Klan, opposed passage of the 13th, 14th and 15th amendments to the Constitution (the "Civil War amendments" passed to ensure equality for recently emancipated slaves), and filibustered the Civil Rights Act of 1964 for 75 days in the U.S. Senate until Republicans mustered the votes to override the filibuster.

Yet, after the 1964 Civil Rights Act ultimately became law, and especially after Rev. Martin Luther King Jr.'s iconic "I have a dream" speech, a sort of miracle occurred in America. The nation's great middle class literally changed its mind about segregation in a single generation, wholeheartedly embracing King's dream of a color-blind America where all people would be judged "not by the color of their skin, but by the content of their character."

Bottom line, today the vast majority of Americans could not care less about their neighbor's skin color.

One final point: In trying to come to grips with "the legacy of slavery," many ask, "How could people have possibly thought enslaving Africans was OK?"

Perhaps we can gain an understanding of the reality of human brokenness, denial and blindness – a condition that permits otherwise decent people to regard an entire class of their fellow human beings as less than human and thus to abuse them – when we realize we have done the same thing with regard to America's second great national sin, abortion, which divides the nation today.

When Americans are able to look back one day and say, "How could we possibly have thought killing millions of precious little babies was OK?," that realization – that every age suffers from its own unique blindness – may help us realize that slavery was indeed a terrible injustice, but we are not better people than our forefathers were, and we don't need to tear down their statues, erase our history, and endlessly hate our country, as the left does. 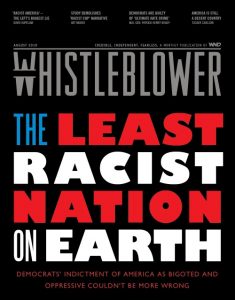 The preceding is David Kupelian’s introductory story in the August issue of Whistleblower magazine, titled “THE LEAST RACIST NATION ON EARTH: Democrats' indictment of America as bigoted and oppressive couldn't be more wrong.”

Whistleblower is WND’s flagship subscription product, and becoming a subscriber is one of the best ways to provide much-needed support to WND, while in return receiving some of our most powerful information and insights every month. Whistleblower is available in both PRINT and DIGITAL versions, and makes a much-appreciated GIFT.

David Kupelian
David Kupelian is an award-winning journalist, long-time Managing Editor of WND.com, and the bestselling author of "The Marketing of Evil," "How Evil Works" and “The Snapping of the American Mind.”
How tyrants and lunatics are enslaving Americans by redefining EVERYTHING
Google falsely warns readers: WND 'may harm your computer!'
The REAL reason transgender groomers are targeting America's children
Google's all-out attack on WND
Why ruling elites hate and fear genuine Christians
See more...