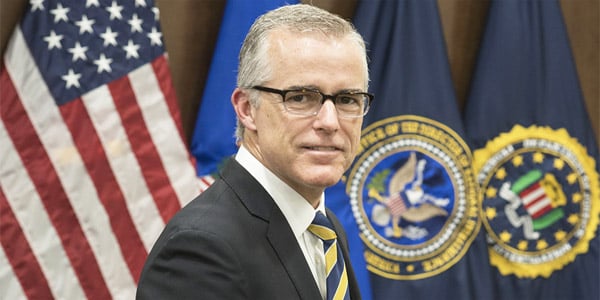 The Justice Department has rejected a plea from former acting FBI Director Andrew McCabe that he not be prosecuted over the offenses for which he was fired – leaking secret government information to reporters and then lying about it, according to a source who spoke to Fox News.

McCabe, who served as acting director after the firing of James Comey and acknowledged an effort to remove President Trump from office, recently was confirmed as a speaker for a Democratic Party fundraiser.

WND reported last month federal prosecutors were in the final stages of deciding whether to indict McCabe on charges of lying to bureau investigators, including under oath.

The Justice Department's inspector general found McCabe, who was later fired, was "lacking candor" in his interviews.

Fox News reported McCabe had appealed the decision of the U.S. attorney for Washington to Jeffrey Rosen, the deputy attorney general, but Rosen rejected that request.

Fox said that was according to a person familiar with the situation.

The charges involve his misleading statements about the investigation of Hillary Clinton's mishandling of classified information.

McCabe recently was hired as a commentator for CNN.

Fox News has learned that US Attorney DC Jesse Lieu recommended moving forward with charges against former Deputy FBI Director Andrew McCabe. His team appealed that decision to DAG Rosen, who REJECTED that appeal, according to a person familiar with the situation.

Then-Attorney General Jeff Sessions fired McCabe in March 2018, just before he was to retire after 21 years, when the IG found he repeatedly misstated his involvement in a leak to the Wall Street Journal.

McCabe denied he did anything wrong, blaming the accusations of mischaracterizations and omissions.

Last month, McCabe sued the FBI and the Justice Department over his firing.

There have been suspicions about McCabe's political neutrality since 2015 when friends of Hillary Clinton gave hundreds of thousands of dollars to his wife, Jill McCabe, in her unsuccessful run for office as a Democrat.