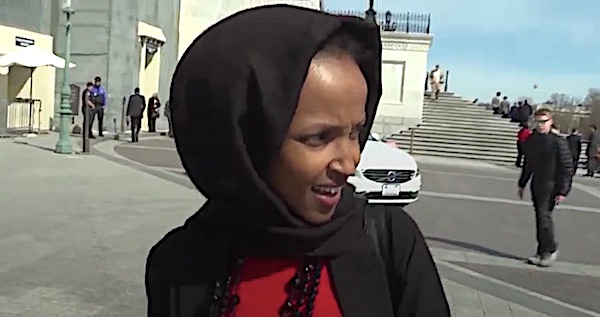 U.S. Rep. Ilhan Omar, D-Minn., has campaigned against Israel, supported men accused of joining ISIS, trivialized 9/11 by saying "some people did something" and allegedly used campaign funds to pay for an extra-martial affair.

She once wrote on Twitter, "Israel has hypnotized the world, may Allah awaken the people and help them see the evil doings of Israel."

So what companies are enthused about supporting the newcomer to Congress for another term in 2020?

Investigative reporter Laura Loomer cited a report from Open Secrets: "In yet another example of Silicon Valley Sharia, and further evidence that the big tech social media companies are in bed with the radical Left, Apple and Google are the top campaign contributors to Rep. Ilhan Omar's 2020 congressional re-election campaign," Loomer explained.

Omar has raised about $1.4 million for her campaign, "and has already spent $539,315 of it, a large portion of which has reportedly been given to Tim Mynett, a Democratic consultant whose wife accused him of having an affair with Omar," said investigative reporter Laura Loomer.

Loomer said it effectively means Apple and Google are backing marriage fraud as Omar "has been accused of marrying her brother in an immigration and student loan fraud scheme."

Then there's Omar's advocacy for "9 men accused of joining ISIS," her refusal to condemn Hamas, her refusal to condemn female genital mutilation, her "anti-Jewish statements," her support for the BDS movement and its goal of eliminating Israel, her opposition to legislation to halt insurance payouts to terrorists and her support for calls for jihad against President Trump, among others.

Her newest scandal is her relationship with Mynett.

Loomer noted that a according to a filing for divorce by Mynett's wife, Tim Mynett met Omar while working on her campaign for Congress. Federal Election Commission filings show Omar's campaign has paid 'E Street Group' over $220,000 for campaign related expenses.

Loomer pointed out than an FEC complaint alleges that Omar "illegally used her campaign funds to pay for travel expenses for her married boyfriend, Tim Mynett."

Loomer calls Omar "arguably the most scandal plagued first term congresswoman in U.S. history" and said she's benefiting from the admitted "manipulation" of the big tech companies in her favor.

"There is plenty of evidence which suggests Big tech is engaged in financial and political arrangements with the Democrat Party and left-leaning activists who work together to boost Democrat candidates and suppress Republicans, as reported by the Wall Street Journal," she wrote.

The report continued: "How are Americans supposed to have any faith in their political system when the technology they use on a daily basis is controlled by monopolistic tyrannical tech companies that are using algorithms and foreign workers to favor far-Left, anti-American politicians like Ilhan Omar, who has ties to terrorist organizations?

"The Democrats have complained for three years about so called 'Russian interference' in the 2016 US Presidential election, an absolute hoax, while they simultaneously ignore all of the collusion that big tech and foreign actors contracted with big tech are actually playing in the U.S. election, and the effect they are having on constitutionally protected speech as outlined in the First Amendment."

She cited an undercover Project Veritas that captured Google executive Jen Gennai discussing how "Google could manipulate their algorithm to prevent a Trump victory."

She wrote: "President Trump is correct. Google, Apple, Facebook, and Twitter are inherently biased against conservatives and they should be sued for election interference. ... It should alarm every single American that the people who control what you see and hear are collectively donating to Ilhan Omar and other far-left candidates."

Omar recently was denied entry to Israel for her support for the anti-Semitic BDS movement.