Two weeks ago I touched on the significance of the "Grapes of Sodom" in prophecy as I addressed the biblical principle of cumulative sin and questioned how long sin-heavy America, Israel and this world can expect God's mercy to endure before His wrath is finally triggered. This week I want to deal at greater length with the question of repentance and whether the revival longed for by many sincere believers is even possible without openly confronting – or even acknowledging – the chief heresy of our time.

Neither the close association of God's wrath with "the sin of Sodom" in the Bible, nor the specific identification of the "grapes of wrath" as coming "from the vine of Sodom" is accidental (Deuteronomy 32:32). Biblically speaking, the widespread social acceptance of rampant homosexuality IS the key harbinger of God's wrath.

It is also no accident that the most famous revival-producing sermon in American history is grounded in the exact same passage of Scripture: the Song of Moses. In fact, Jonathan Edwards' proof-text for "Sinners in the Hands of an Angry God" is drawn from the very next paragraph: "Vengeance is mine, and recompence; their foot shall slide in due time; for the day of their calamity is at hand, and the things to come hasten upon them" (Deuteronomy 32:35).

Rev. Edwards' overarching emphasis in that world-changing sermon was that the society of his day had fully earned God's wrath and was wearing His patience thin: "Divine justice says of the tree that brings forth such grapes of Sodom, 'cut it down; why cumbereth it the ground?'" he wrote. "The sword of divine justice is brandished every moment over the hand of arbitrary mercy, and God's mere will holds it back."

I have enjoyed the privilege of reenacting "Sinners in the Hands of an Angry God" in numerous churches and other venues over the course of my ministry career. It is an exceedingly powerful and sobering message that understandably brought the relatively God-fearing but increasingly sexually immoral population of 1741 to their knees in repentance, triggering massive revival.

In contrast to that society, does ours today seem like it could be swayed even slightly by a fervent call to repentance? Yet, if Edwards was right about the deservedness of his generation to bear God's wrath, how much moreso is that true of ours?

Coincidentally, I happened to be in Jonathan Edwards' hometown of Northampton, Massachusetts, this week and had the opportunity to stop by the Edwards Church, the de facto institutional heir of his legacy. It is not Rev. Edwards' original church building, but it bears a plaque dating it to 1833, so it is obviously a congregation with deep roots in America's biblically faithful past. But sadly, it's wayward stewards in this generation have very prominently displayed the LGBT "rainbow flag" in the front window. 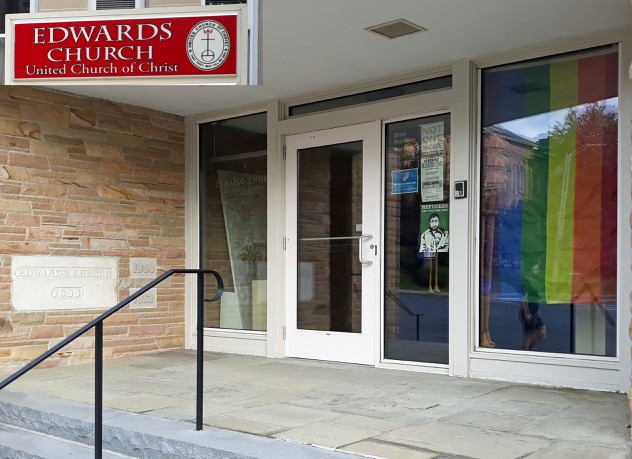 One of my ancestors is the devout Pilgrim immigrant Roger Conant who arrived in Plymouth, Massachusetts, in 1624. He was founder and first governor of Salem ("Peace"), which was so named in his honor because he voluntarily stepped down and actively worked to pacify his loyal followers to avert warfare when the legal British owners of the land sent their own governor from England to take over. There is both a statue to Conant in Salem and a large metal plaque on a giant boulder in State Fort Park on Cape Anne commemorating his gracious diplomacy. But today, Salem is literally overrun with occultists and radical atheists, and awash in rainbow flags.

Roger Conant also helped to finance the first church in Salem, which, like Jonathan Edwards' church, was replaced by a newer building in the 1800s. It bears an historical placard on the outer fence printed with the original and very inspirational "Covenental Oath" drafted by the church founders. But on the official signboard of the church, representing the present-day life of the congregation, another rainbow flag is prominently displayed.

I could list page after page of similar examples of iconic former Christian strongholds that have been conquered by the LGBTs. They each represent a separate failure of individuals and congregations to stand firm on biblical truth, resulting in ground lost to the demonic realm.

With each surrender, the church grows weaker, and the adversary grows stronger – and the cost to believers for speaking plain truth grows higher, driving vast numbers of fearful Christians deeper into their burrows of self-censorship and personal compromise.

Even otherwise outspoken Christian leaders – such as Pastor Rhyan Grezman, in the news recently attacking the gross blasphemer "Mayor Pete" Buttigieg for twisting Scripture to claim biblical support for abortion until birth – are apparently afraid to stand on God's word about homosexuality. Grezman's brother, named "Chasten" (a Divine irony), is Buttigieg's sodomy partner in a false "marriage." Grezman blasphemously calls Buttigieg his brother's "husband" and takes pains to clarify that he opposes Mayor Pete for other reasons, "not because he is gay." Brethren, this is an ostensibly conservative pro-life pastor!

All I've cited above is clear evidence of the rise of the last-days culture of apostasy – which the Apostle Paul warned in Romans 1:18-32 (taken together with 2 Timothy 3) is dominated and defined by rampant homosexuality. This isn't right-wing "homophobic" hyperbole; it is literal Bible truth expressed by God through His Apostles in straightforward language on the pages of His Word. Fear driven or not, the degree of moral confusion and compromise necessary for this generation of Christians to be blinded to such stark and glaring warnings is simply staggering.

Can there possibly be revival in this context? How can believers repent of something they don't have the courage or moral clarity to even name?

Critics of my eschatology will reply that prior generations have seen similar evils, and that is true. But today's level of apostasy in coordination with great evil is peaking to heights not seen since the early days of the church. And shockingly, highly influential Christian leaders – followed most heavily by young people – like sexual purity author Josh Harris and Hillsong musician Marty Sampson, are very publicly renouncing their faith: an apparent early step of the great "falling away" prophesied in 2 Peter 2 and 2 Thessalonians 2.

And when since the collapse of the Roman Empire have we seen the demonic realm act more boldly than in the open and notorious machinations of America's so-called "Church of Satan"? (Which recently announced proudly that well over 50 percent of its members are LGBTs!) Symbols of Christianity, such as the monument to the Calvinist Reformers in Geneva, Switzerland, are being repeatedly vandalized with rainbow paint and graffiti. In fully LGBT conquered nations such as Canada, England and now Finland, quoting the Bible on homosexuality now triggers "hate crime" investigations. This is a new and unprecedented era of persecution unfolding before us, just as was prophesied.

At the opening of the last-days calendar in Revelation 6, the Antichrist is showcased in verse 2: "I looked and behold a white horse, and he who sat on it had a bow; and a crown was given to him, and he went out conquering and to conquer."

In my book "The Petros Prophecy" (which I will send you freely in PDF by request), I point out that the word "bow" in that passage is the same word in New Testament Greek as the Old Testament Hebrew word for "rainbow" in Genesis 9:15, illuminating a deeper meaning that I believe explains why the Satanic Kingdom in Jerusalem – which Jesus destroys upon His second coming – is "mystically called Sodom and Egypt" (Revelation 11:8). And I also point out that Revelation 6:2 reveals that the Antichrist already has possession of that "bow" when God – in fulfillment of His prophecy – gives him permission to wage war against the Christians (Revelation 13:7).

That's one reason why I think we're already in or very near the season of the end, and that the unsaved world around us can rightly be characterized as "sinners in the hands of the 'rainbow god.'" 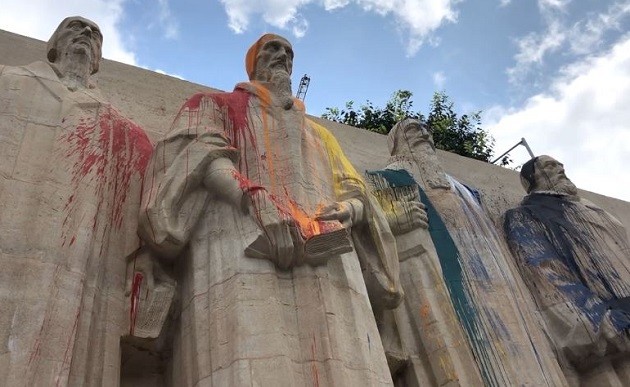 Scott Lively
Scott Lively is an attorney, pastor, human rights consultant and missionary with service in more than 50 countries. He is the author of eight books including "Redeeming the Rainbow," a textbook on pro-family advocacy and opposition the the LGBT agenda, and his most recent work "The Prodigal Son Prophecy: God's Amazing Plan for the Restoration of the Two Hebrew Houses and the Salvation of the Gentiles." All of Scott's books are offered freely in PDF and/or video form at his website https://www.scottlively.net/subscribe/. He can also be reach by email at [email protected]
Open letter to Gab's Andrew Torba regarding 'Christian Nationalism'
A Rosh Hashana rapture on Sept. 25?
American Babylon and the LGBT plague
Dark Brandon rising – in preparation for WWIII
Why only Christianity can defeat Marxism
See more...