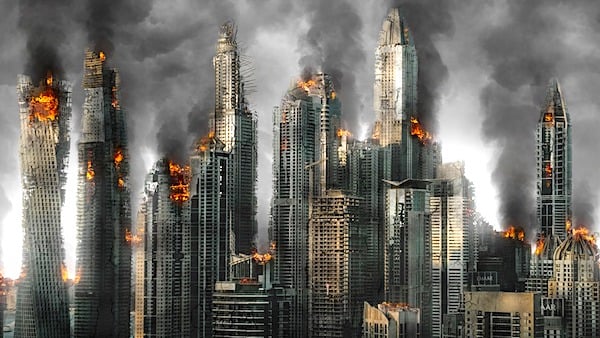 The Bible predicts an end-times war called the battle of Gog and Magog.

While there have been many interpretations of the relevant Scriptures, many scholars agree it's a short war of extreme violence involving the whole world.

God's children win, by the way.

Princeton University's Program on Science and Global Security concludes the Gog battle is a "realistic scenario."

The study forecasts the toll of a massive nuclear war.

And Isaiah 17:14 describes a war of sudden and short duration that sounds like a nuclear conflict: "At eventide behold terror; and before the morning they are not."

Isaiah 2:19 says people will try to hide underground: "And men shall go into the caves of the rocks, and into the holes of the earth, from before the terror of Hashem" and the earth shall "shake mightily."

Isaiah 13:10 describes the aftermath, which sounds like a nuclear winter in which ash and dust in the air reduce the sun's warming: "For the stars of heaven and the constellations thereof shall not give their light; the sun shall be darkened in his going forth, and the moon shall not cause her light to shine."

BIN reported the Princeton project created a simulation of an escalating war between the United States and Russia.

"The simulation is based on realistic nuclear force postures, targets and fatality estimates," BIN reported. "According to their estimates, more than 90 million people would be killed or injured within the first few hours of the conflict. The study comes in the wake of what SGS considers a growing risk of nuclear conflict following the abandonment of nuclear agreements The SGS assessment was illustrated by a four-minute video depicting a conflict that escalates from a conventional confrontation to a full-on nuclear war.

"In the opening stages, the SGS suggests a scenario in which North American Treaty Alliance (NATO) troops threaten Russia which responds with a nuclear 'warning shot.' NATO retaliates with a single tactical airstrike. Russia responds by sending 300 nuclear warheads via aircraft and short-range missiles targeting NATO bases and troops. NATO retaliates with 180 warheads in similar strikes against Russia. SGS estimates some 2.6 million dead in the first three hours of the conflict."

Then, bombing of the most populous cities and key economic centers could follow.

"Over the next 45 minutes, SGS estimates 85.3 million people will become casualties. The final tally is set at 91.5 million casualties: 34.1 million deaths within the first few hours and 57.4 million wounded," BIN said.

The predicted death tolls do not include fatalities from nuclear fallout.

BIN said, "As disturbing as the SGS simulation is, it may be considered as an accurate depiction" of an end times battle.

A prominent 18th century Torah authority calculated the war of Gog and Magog lasts 12 minutes, which would have been incomprehensible with the technology available at the time the Scripture was written.

The simulation is based on Nukemap, a website that can simulate different types of nuclear strikes anywhere in the world and estimate the resulting casualties, BIN reported.

A Cold War simulation by the U.S. suggested a nuclear attack could have resulted in 335 million Chinese and Russian dead within 72 hours. A Pentagon report suggested a Soviet attack could cost up to 88 million American lives, or about one-third of the population at that time.

BIN reported: "This horrifying possibility of one-third of the population being wiped out in a nuclear war is mild compared to the scale of the Gog and Magog War described in the Book of Zechariah. The prophet states that fully two-thirds of Israel will die in the War of Gog and Magog."