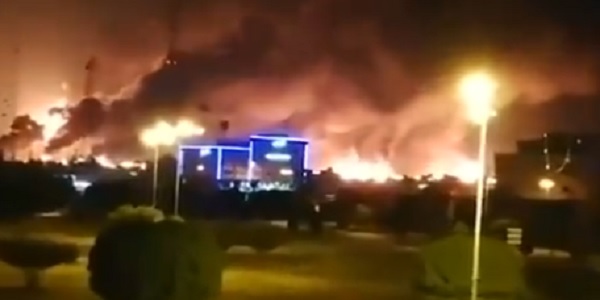 While making it clear he isn't looking for war, President Trump said Monday it is "certainly looking" like Iran was behind the drone attacks Saturday on one of Saudi Arabia's key oil facilities.

"That was a very large attack, and it could be met with an attack many, many times larger very easily by our country," he said in a White House meeting with Bahrain Crown Prince Salman bin Hamad bin Isa Al Khalifa.

"But we're going to find out who definitively did it, first."

Trump emphasized: "I don't want war with anybody. I'm somebody that would like not to have war."

Crude prices surged Monday as Saudi Arabia was forced to stop the production of about 5.7 million barrels per day.

Secretary of State Mike Pompeo will travel soon to Saudi Arabia as part of the investigation to determine who was responsible, Trump told reporters

"It's certainly looking that way, at this moment," Trump said regarding Iran. "Soon as we find out definitively, we'll let you know, but it does look that way.

"I think you won't be surprised to see who did it," he said.

Iran-backed Houthi rebels in Yemen have taken responsibility for the attack. The rebels are engaged in a civil war with Yemen's Saudi-backed government.

But the attack appears to have come from the north, from Iran or Iraq, rather than from Yemen in the south, according to U.S. officials.

The Saudis have said Iranian weapons were used in the attack.

Trump said his administration is taking steps to counter any shortages in the world's oil supply.

"We have the strategic oil reserves, which are massive, and we can release a little bit of that," he said.