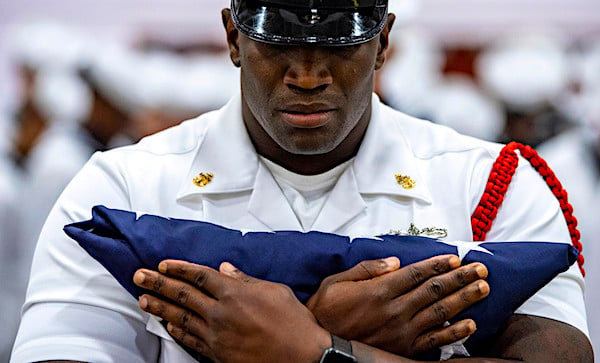 A new Pew Research poll shows how much 9/11 changed the U.S. military.

For example, nearly four of five post-9/11 veterans have been deployed, compared to 58% for pre-9/11 service members.

In addition, 47% have had a distressing or "emotionally traumatic" experience, nearly double the number from pre-9/11 vets; 35% have sought help for emotional issues, nearly four times that of pre-9/11 vets; and 36% report post-traumatic stress, two and a half times that of earlier generations of vets.

"Because they are more likely to have been deployed and to have seen combat, post-9/11 veterans are also more likely to bear the scars of battle, whether physical or not. Roughly half say they had emotionally traumatic or distressing experiences related to their military service, and about a third say they sought professional help to deal with those experiences. In addition, 36% say that – regardless of whether they have sought help – they think they have suffered from post-traumatic stress (PTS)," the report found.

Pew defined veterans as men and women who do not currently serve on active duty but did so in the past.

Reservists who were mobilized or deployed also were included.

"In thinking about their service, a majority of all veterans express pride. Still, those who served in the post-9/11 era are somewhat less likely than their predecessors to say they frequently felt proud after leaving the military (58% vs. 70%)," Pew found.

"For many veterans, the imprint of war is felt beyond their tour of duty and carries over into the transition from military to civilian life. This is true regardless of era of service. When asked about their experiences in the first few years after leaving the military, combat veterans are less likely than those who didn't serve in combat to say they frequently felt optimistic about their future, and they are more likely to say they didn't get the respect they deserved, struggled with the lack of structure in civilian life, and felt disconnected from family or friends," the report said.

More than nine in 10 said the military prepared then well to serve. But when it came to preparing to return to civilian life, only about half of all veterans say they were prepared very or somewhat well.

A similar share says the military didn’t prepare them too well or at all.

And the post-9/11 veterans more often said their return to civilian life was difficult.

"Combat veterans are especially likely to say they struggled with the transition, and this is particularly true of those who had emotionally traumatic experiences," the report found. They are more likely to report trouble paying bills, difficulties with alcohol or substance abuse, or employment.

The survey found six of 10 say their military experienced helped at least some in finding a later civilian job.

Military veterans also, by a large margin, endorse the military as a career. Eight-in-10 say they would advise a young person close to them to join.