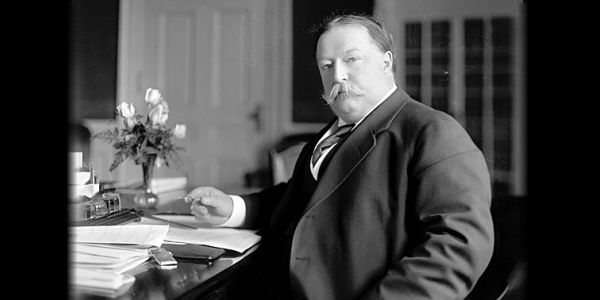 He was the only U.S. president to be appointed Chief Justice of the U.S. Supreme Court. His name was William Howard Taft, born Sept. 15, 1857.

After the Spanish-American War, Taft was appointed by President McKinley as the first governor of the Philippines, 1901-04. President Theodore Roosevelt appointed Taft as Secretary of War in 1904, then in 1906 appointed him provisional governor of Cuba.

In 1908, Taft ran for president against Democrat candidate William Jennings Bryan. William Jennings Bryan edited the Omaha World Herald and founded the Commoner Newspaper. Bryan served as a Colonel in the Spanish-American War and a congressman from Nebraska. Later, he was Secretary of State under President Woodrow Wilson.

William Jennings Bryan was so popular that the state of Nebraska placed a statue of him in the U.S. Capitol's Statuary Hall. Bryan gave over 600 public speeches in the course of his campaign for president, the most famous being "The Prince of Peace," printed in The New York Times, Sept. 7, 1913: "I enjoy making a political speech ... but I would rather speak on religion than on politics. I commenced speaking on the stump when I was only twenty, but I commenced speaking in the church six years earlier-and I shall be in the church even after I am out of politics. ..."

Bryan reasoned: "Man feels the weight of his sins and looks for One who is sinless. ... Religion is the foundation of morality in the individual and in the group of individuals. ... A religion which teaches personal responsibility to God gives strength to morality. ... We must begin with something – we must start somewhere – and the Christian begins with God. ... The Gospel of the Prince of Peace gives us the only hope that the world has."

William Howard Taft won the election and was sworn in as the 27th president on March 4, 1909, stating in his inaugural address: "I invoke the considerate sympathy and support of my fellow citizens and the aid of the Almighty God in the discharge of my responsible duties."

Taft was the largest president, weighing over 300 pounds. A bathtub was installed in the White House for him large enough to hold four men.

President Taft stated in a National Day of Thanksgiving Proclamation, Nov. 15, 1909: "The people of the United States are wont to meet in their usual places of worship on a day of thanksgiving appointed by the Civil Magistrate to return thanks to God for the great mercies and benefits which they have enjoyed. During the past year we have been highly blessed. ... It is altogether fitting that we should humbly and gratefully acknowledge the Divine Source of these blessings. ... I hereby appoint ... a day of general thanksgiving, and I call upon the people on that day, laying aside their usual vocations, to repair to their churches and unite in appropriate services of praise and thanks to Almighty God."

President William H. Taft proclaimed, Nov. 5, 1910: "These blessings have not descended upon us in restricted measure, but overflow and abound. They are the blessings and bounty of God. ... In accordance with the wise custom of the civil magistrate since the first settlements in this land and with the rule established from the foundation of this government ... do appoint ... a day of National Thanksgiving and Prayer, enjoining the people upon that day to meet in their churches for the praise of Almighty God and to return heartfelt thanks to Him for all His goodness and loving-kindness."

President Taft met with Booker T. Washington and encouraged his program for uplifting black Americans through education and entrepreneurship. Booker T. Washington founded the National Negro Business League in 1900, growing it to 600 chapters. This was more than a decade before the U.S. Chamber of Commerce was formed.

Booker T. Washington's goal of raising up successful independent black entrepreneurs contrasted with W.E.B. Du Bois's goal of reparations and entitlements, which led to a debilitating dependency on government hand-outs.

Taft stated, as recorded in Donald F. Anderson's "William Howard Taft: A Conservative's Conception of the Presidency" (Ithaca, NY: Cornell University Press, 1973): "The president can exercise NO power which cannot fairly be traced to some specific grant of power in the Constitution or act of Congress."

Because the Capitol House Chamber, designed in 1857, was running of out of space for seats, Taft's administration approved the Apportionment Act of 1911 which limited the number of Congressmen to 435. This forever changed the Congressional ratio and how Americans would be represented. Instead of one Congressman for every 30,000 people, it now required a census be taken every ten years and the nation's population be divided by 435.

Unfortunately, lack of foresight has resulted in the present situation of one Congressman for every 700,000, requiring candidates to spend their time seeking large financial contributions for their races. This also effects how presidents are elected, as electoral votes are apportioned to the states based on the number of Congressional seats.

If states can increase their populations, not only do they get more power to influence national policy through more Congressional seats, they also get more electoral votes to determine who the next president will be.

President William H. Taft stated in his Thanksgiving Proclamation, Nov. 7, 1912: "A God-fearing nation, like ours, owes it to its inborn and sincere sense of moral duty to testify its devout gratitude to the All-Giver for the countless benefits its has enjoyed. For many years it has been customary at the close of the year for the national Executive to call upon his fellow countrymen to offer praise and thanks to God for the manifold blessings vouchsafed to them. ... I, William Howard Taft, President of the United States of America, in pursuance of long-established usage and in response to the wish of the American people, invite my countrymen ... to join ... in appropriate ascription of praise and thanks to God for the good gifts that have been our portion, and in humble prayer that His great mercies toward us may endure."

In his annual message, Decc 6, 1912, William Howard Taft stated: "We would go as far as any nation in the world to avoid war, but we are a world power, our responsibilities in the Pacific and the Atlantic, our defense of the Panama Canal, together with our enormous world trade and our Missionary outposts on the frontiers of civilization, require us to recognize our position as one of the foremost in the family of nations, and to clothe ourselves with sufficient naval power to give force to our reasonable demands, and to give weight to our influence in those directions of progress that a powerful Christian nation should advocate."

In the turbulent 1912 Presidential race, Theodore Roosevelt's new third party – the Bull Moose Party – split the Republican voter base, allowing Democrat Woodrow Wilson to be elected with only 41.8 percent of the vote.

Woodrow Wilson's term brought in the 16th Amendment – Income Tax, and the 17th Amendment – having U.S. Senators no longer chosen by state legislators, but instead by the popular vote, requiring candidates to spend their time seeking large financial contributions for their races. Wilson racially segregated the federal government and military, brought the U.S. into World War I, and tried to get the country to surrender its sovereignty to the globalist League of Nations.

After serving as President, Taft was chosen in 1913 to become a professor at Yale Law School and president of the American Bar Association. In 1921, President Warren G. Harding appointed William Howard Taft as Chief Justice of the U.S. Supreme Court.

Taft was the first Justice to employ full-time law clerks. Taft took the decentralized federal court system and for the first time ever united it under the control of the Chief Justice. This enhanced the emerging view that the Supreme Court was an "independent" third branch of government, and unfortunately gave momentum to the Court's progressive usurpation of powers.

In 1929, Taft promoted the idea of moving the Supreme Court out of the basement of the Capitol into its own Supreme Court building across the street, which was completed in 1935.

Back when he was campaigning for president, William H. Taft spoke at a missionary conference, Aug. 5, 1908: "Until I went to the Orient, until there was thrust upon me the responsibilities with reference to the extension of civilization in those far distant lands, I did not realize the immense importance of foreign mission. The truth is we have got to wake up in this country. We are not all there is in the world. ... No man can study the movement of modern civilization from an impartial standpoint and not realize that Christianity, and the spread of Christianity, are the only basis for hope of modern civilization in the growth of popular self-government. The spirit of Christianity is pure democracy; it is the equality of man before God. The equality of man before the law, which is, as I understand it, the most Godlike manifestation that man has been able to make. ..."

Taft continued: "I am here to speak of ... the advancement of modern civilization, and ... how dependent we are on the spread of Christianity for any hope we may have of uplifting the people whom Providence has thrust upon us for our guidance. I suppose I ought not to go into a discussion here of our business in the Philippines, but I never can take up that subject without pointing the moral ... conviction that our nation is ... charged with the obligation to help the unfortunate peoples of other countries that are thrust upon us by faith onto their feet to become a self governing people. ... What there is in the Constitution of the United States is a breathing spirit that we are a nation with all the responsibilities that any nation ever had and ... it becomes the Christian duty of a nation to assist another nation."