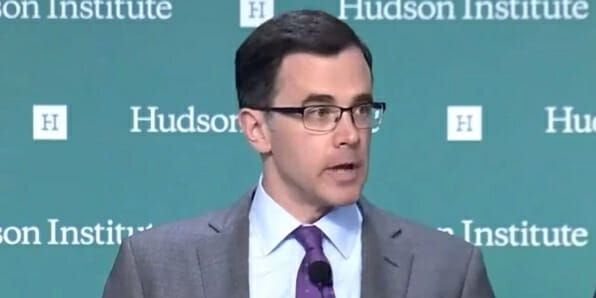 As majority House Democrats passed a resolution Thursday formalizing a formal impeachment investigation, a former National Security Council official under President Trump testified to House Intelligence Committee members he was never concerned that the president discussed anything illegal in his July 25 phone call with the Ukrainian president.

The call with Ukrainian President Volodymyr Zelensky is the subject of the Democrats' impeachment inquiry. An anonymous whistleblower has charged -- based on second-hand knowledge -- that Trump used the threat of withholding U.S. aid to pressure Ukraine to cooperate in the investigation of the origins of the Trump-Russia collusion probe and to "look into" Hunter Biden's profiting from a Ukrainian firm while his father was President Obama's point man for Ukraine policy.

But unlike the whistleblower, former NSC Senior Director for European Affairs Tim Collins listened to the call.

"I want to be clear, I was not concerned that anything illegal was discussed," said Morrison, according to a record of his remarks obtained by The Federalist.

In a partisan vote, 232-196, the Democratic-majority House approved a resolution Thursday morning formalizing its impeachment investigation of President Trump.

No Republicans voted for the measure, which sets the "ground rules" for proceedings that already have been underway for more than a month. Two Democrats in districts won by President Trump in 2016 were against it, Reps. Jeff Van Drew, D-N.J., and Collin Peterson, D-Minn.

Morrison said Ukrainian officials were unaware that certain military funding had been delayed until Aug. 28, more than a month after the phone call.

The Federalist pointed out it was the same day that Schiff disclosed the funding delay on Twitter.

Schiff initially insisted neither he nor his staff ever spoke to the whistleblower, but he was forced to backtrack after the New York Times reported there was contact before the filing of the complaint.

In his testimony Thursday, Morrison contested the prior testimony of William Taylor, a State Department official who works in the U.S. Embassy in Kiev, Ukraine.

Morrison said, contrary to Taylor's claims, that never met with the Ukrainian National Security advisor in his private hotel room.

Taylor also, Morrison testified, falsely claimed that Ambassador Gordon Sondland demanded the Ukrainian president issued a public statement committing to an investigation of Burisma, the Ukrainian energy company that paid Hunter Biden millions of dollars to sit on its board.

"My recollection is that Ambassador Sondland's proposal to [Ukrainian National Security Advisor Andriy] Yermak was that it could be sufficient if the new Ukrainian prosecutor general — not President Zelensky — would commit to pursue the Burisma investigation," Morrison testified.

The former NSC official said the transcript of the phone call that was declassified and released by Trump in late September "accurately and completely reflects the substance of the call."

He said he immediately informed an NSC lawyer of his concern that the phone call would be leaked.

Democrats have insisted that such concern, and security measures taken to prevent the leaking of the top secret call, prove that Trump should be impeached.

In his testimony, Morrison said that with regard to the military funding for Ukraine authorized by Congress, the national security process worked as designed.

“I am pleased our process gave the president the confidence he needed to approve the release of the security sector assistance," he said. "I am proud of what I have been able, in some small way, to help the Trump administration accomplish."

The House resolution passed Thursday specifies that the White House counsel can present its case, respond to evidence, attends hearings, raise objections to testimony and cross-examine witnesses. But the provisions will not be implemented until the case is referred from the House Intelligence Committee, chaired by Rep. Adam Schiff, D-Calif., to the House Judiciary Committee.

That means Schiff can continue his investigation without the involvement of White House counsel.

The resolution also gives authority to Democratic committee chairmen to approve which witnesses can be called.