ISIS is "on the rise" and more than 300,000 people have been displaced in northeastern Syria since the U.S. withdrawal of special forces, says an American aid worker in Syria near the border with Turkey.

David Eubank, a former Army Ranger captain who founded a humanitarian group known for working in war zones in Asia and the Middle East, the Free Burma Rangers, told WND on Wednesday that most international non-governmental organizations have left the area.

Local NGOs, he said, "are working hard but have very few resources and need help to meet these needs." 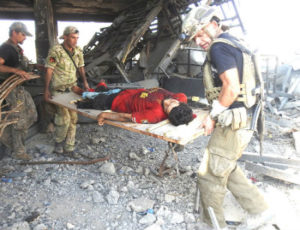 President Trump, with members of his own party at odds over a complex geopolitical situation, defended the withdrawal at the White House on Wednesday, arguing his intent is to remove the United States from "endless wars" in which it has no national interest.

"Syria doesn't want Turkey to take its land. I can understand that," Trump said. "But what does that have to do with the United States of America?

"They're fighting over Syria's land. Are we supposed to fight a NATO member so that Syria, who is not our friend, keeps their land? I don't think so," said Trump.

Eubank said the Kurdish leaders in the region with whom he has worked for several years feel deeply betrayed and fear for their future.

The U.S. partnered in 2015 with the mostly Kurdish Syrian Democratic Forces, which include many Christians, to defeat ISIS and contain any resurgence.

"Now ISIS is on the rise again as the SDF cannot defend themselves against the Turkish-led onslaught and still control all the camps," said Eubank.

He acknowledged the U.S. "cannot solve the problem, but our presence made a space where Kurds and Arabs could try to solve it."

"It was working, and at far less cost than our similar deployments since World War II in Europe or in Korea," he said.

The SDF pushed back ISIS fighters in 2016 and defeated the Islamic jihadist movement in March, he noted.

"People here trusted us, and there was positive change and hope," said Eubank.

"We threw all that away after assuring the SDF we were with them and convincing them to dismantle their defenses on the front line right before we stepped aside and let Turkey attack."

Christian communities in the region have expressed fear that the offensive is threatening their very existence.

Eubank said that if the U.S. doesn't return troops to the area, it should establish a no-fly zone, keep the SDF supplied and provide immediate humanitarian assistance.

He quoted a Kurdish relief leader in the town of Hasaka, Syria, about 25 miles south of the Turkish border.

"Yesterday at the meeting of our people we cried. We don't have enough to help those in need," the leader said. "(But) we got ourselves under control and said we will not run. We will help with what we have."

Turkey regards the SDF as proxies for the Marxist separatist group, the Kurdistan Workers Party, or PKK, which has battled the Turkish state for 35 years. Erdogan wants to crush Kurdish aspirations of an autonomous state and resettle some 1 million Syrian refugees in Turkey in the area.

Vice President Mike Pence and Secretary of State Mike Pompeo will visit Turkey on Thursday to urge Erdoğan to halt his offensive. The U.S. already has announced sanctions and tariffs on Turkey.

On Wednesday, the House approved a resolution with strong Republican support, 354-60, opposing the withdrawal of U.S. troops.

On Sunday, Defense Secretary Mark Esper said 1,000 U.S. troops will be withdrawn from northern Syria as "quickly as possible."

WND interviewed Eubank in June 2017 after he returned from a humanitarian mission to Kurdistan, Iraq, where, amid a hail of ISIS bullets, he rescued a 6-year-old girl hiding in a pile of dead bodies in Mosul.

WND also has reported the work of Eubank and his team among the displaced Yazidis under siege from ISIS and in civil war ravaged Burma (here and here.

Eubank said the ongoing ground assaults, artillery and air strikes by the Turkish and Free Syrian Army have displaced more than 300,000 people.

The supply routes from Kurdistan in Iraq to northeastern Syria are still controlled by the SDF, he said, but troops supporting the Syrian government of Bashar Assad have gained ground and control more territory and roads.

There is a danger they will control the humanitarian routes, he said.

The SDF is negotiating to keep the access open, Eubank said, especially the Semalka-Peshabor crossing between Syria and Iraq.

The displaced, he said, are staying in houses, school buildings and other shelters in Hasaka as well as Tel Tamer to the north.

Eubank said Hasaka is removed from the fighting at the moment. But Tel Tamer has already been shelled, and, if attacks continue, may be evacuated.

The Turkish Army has destroyed the water supply in Sere Kani to the north of Hasaka, he said, which has created a critical shortage in the city.

Along with water, he said, the IDPs there need food, medical care, shelter, blankets, diapers and hygiene supplies.

Dave Sears, a former Navy SEAL commander, in an interview Wednesday with Fox News' Neil Cavuto, backed the president's policy, saying he would "prefer to have our troops out of harm's way."

"Why are we there?" he asked, referring to the "Powell doctrine" of former secretary of state Colin Powell under President George W. Bush.

The Gulf War, he said, "was the last time we successfully executed a war to its end."

The Powell doctrine asks questions such as: "What is the U.S. interest in this? What is our exit strategy? Have we leveraged all the elements of national power?"

"None of those things have been answered, I think, for the American people," he said.

"We've gone from a authorization of force post-9/11 that got us into Afghanistan. Then that was used to get us into Iraq. Then it was moved over into Libya and Syria," said Sears.

"We've so overextended into mission creep, that I don't think that the general public knows what we're doing over there anymore," the former Navy SEAL commander said.

Asked about President Trump's criticism of the Kurds, calling them "no angels," Sears said some of the things the president said are not "that great."

"He often speaks ... not very eloquently," Sears said, and "needs to couch his words a little bit better."

But he insisted there is "some truth behind it."

"I can't imagine the Kurds are totally surprised by this," he said. "It's a marriage of convenience. We never said, 'We were going to establish a Kurdistan and stay here to defend you from Turkey for an eternity.'"

That's what it would require, he said, "because the Kurds are not one country; they are inside of Syria; they have a beef with Turkey."

"As soon as we leave, whether it's 50 years from now or tomorrow, Turkey is going to come in and they're going to have a problem with the Kurds," said Sears.

Sears added that he thinks Trump "aggravates some things by making statements like that and throwing the Kurds under the bus."

"They have been willing partners and helped out. They are not an ally, though. Turkey is the actual ally in this situation. They are a formal ally of NATO."

Cavuto concluded remarking that Turkey is not "acting like an ally."

Israeli-American global security analyst Caroline Glick, in a column titled "Trump did not betray the Kurds," disputed the "near consensus view" that "Trump is enabling a Turkish invasion and double crossing the Syrian Kurds who have fought with the Americans for five years against ISIS."

She said the argument for remaining "assumes that until this week, the U.S. had power and influence in Syria when in fact, by design, the U.S. went to great lengths to limit its ability to influence events in Syria."

"The hard truth," she wrote, "is that the fifty U.S. soldiers along the Syrian-Turkish border were a fake trip wire."

'Scratching of heads' among evangelicals

David Brody, chief political analyst for the Christian Broadcasting Network, said in an interview with NPR that Trump's withdrawal has "led to some soul-searching and some scratching of the heads within the evangelical community" that has strongly supported the president.

He was asked why the Kurds are important to evangelical Christians in the United States.

"Religious persecution has been, first of all, something very important to this Trump administration and obviously very important to evangelical organizations throughout the years – Franklin Graham, Tony Perkins at Family Research Council," he said.

"You put all of it together, and that is why there's so much pushback – because this is really the antithesis of everything the Trump administration has been promoting for the last few years."

NPR's Lulu Garcia-Navarro, noting "the Kurds have been good allies to the United States in many of the conflicts in the Middle East," asked Brody if he had heard from evangelicals close to the White House.

"I think the best word to describe it is sadness," he said. "Maybe there's a word of disappointment, as well, because they talk about fighting for religious persecution. And then all of a sudden, we see this move, and it just doesn't jive with everything that they've seen so far."