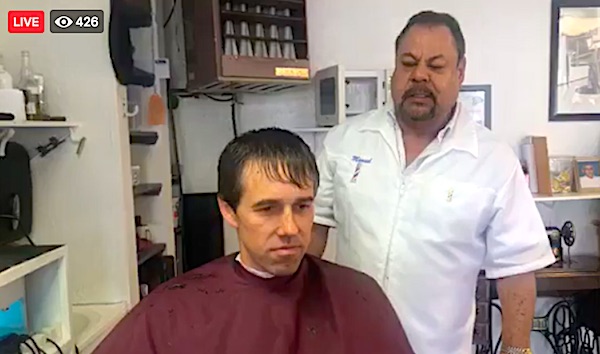 Beto O'Rourke livestreams himself getting a haircut and an apparent massage. (video screenshot via Twitter)

CNN's Don Lemon asked, "Do you think religious institutions like colleges, churches, charities – should they lose their tax exempt status if they oppose same-sex marriage?"

He already has threatened to confiscate guns, and the Dallas paper said his stance on tax-exempt status is "sure to alienate conservative voters" if he were to win the nomination.

"There can be no reward, no benefit, no tax break for anyone, or any institution, any organization in America that denies the full human rights and the full civil rights of every single one of us," O'Rourke said. "So as president we're going to make that a priority and we are going to stop those who are infringing on the rights of our fellow Americans."

There was no report of him addressing any constitutional conflict with dictating beliefs to religious organizations. The U.S. Supreme Court already has affirmed a Colorado baker's decision to refuse to provide a wedding cake to a same-sex duo based on his Christian beliefs.

O'Rourke previously proposed a plan to confiscate up to 15 million guns from Americans.

"O’Rourke’s stance on tax exempt status invited accusations from the right that in his drive for tolerance, he is trying to punish religious groups that disagree with him," the Morning News reported.

"How dare you suggest that we give up #ReligiousFreedom #religiousliberty and remove 501c3 tax status to churches if they oppose #LGBTQ rights or [same sex marriage]," she wrote.

She pointed out the Constitution ensures equality for all, not "just for some."