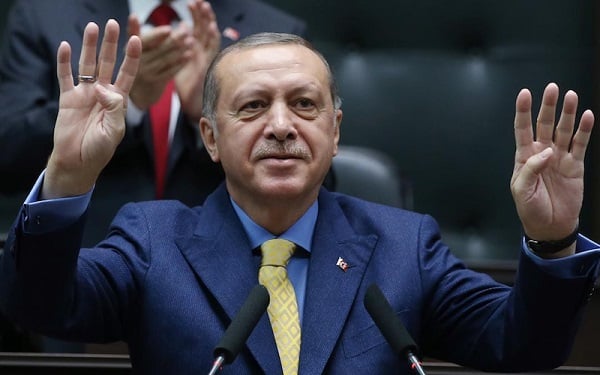 The vice president said Turkey will pause its military operation, Peace Spring, in Syria for five days, until Kurdish forces withdraw from a 20-mile deep "safe zone" in Syria.

Then, he said, military actions "will be halted entirely on completion of the withdrawal."

"In addition, the United States and Turkey have both mutually committed to a peaceful resolution and future for the safe zone, working on an international basis to ensure that peace and security defines this border region of Syria," Pence explained.

The announcement followed a meeting Pence and Secretary of State Mike Pompeo had with Turkey's president, Recep Tayyip Erdogan.

Trump, on a trip to Texas, said it was a "great day" for the U.S., Turkey and the Kurds.

The meeting in Ankara took more than four hours.

The U.S. also agreed to lift economic sanctions against Turkey once the permanent ceasefire takes effect.

Trump said on Twitter, "Millions of lives will be saved!"

"I am proud of the United States for sticking by me in following a necessary, but somewhat unconventional, path," he wrote. "People have been trying to make this 'Deal' for many years. Millions of lives will be saved. Congratulations to ALL!"

However, the Kurdish-led Syrian Defense Forces later denied there is a ceasefire, saying the SDF has not agreed to the terms of the deal.

A Fox News correspondent in Ankara, Trey Yingst, said that by definition, it is not a ceasefire, because SDF forces will be required to evacuate the safezone within five days, which is what Turkey wanted all along.

And he noted that with the U.S. withdrawal, Russia has filled the leadership void and will make the decisions going forward.

Erdoğan launched the offensive last week after Trump announced Oct. 6 he was pulling troops from border observation posts. Ankara wants to create a 20-mile buffer zone between Turkey and territory held by the U.S.-backed and Kurdish-led Syrian Democratic Forces.

Turkey regards the SDF as proxies for the Marxist separatist group, the Kurdistan Workers Party, or PKK, which has battled the Turkish state for 35 years. Erdogan wants to crush Kurdish aspirations of an autonomous state and resettle some 1 million Syrian refugees in Turkey in the area.

On Wednesday, the House approved a resolution with strong Republican support, 354-60, opposing the withdrawal of U.S. troops.

On Sunday, Defense Secretary Mark Esper said 1,000 U.S. troops were to be withdrawn from northern Syria as "quickly as possible."

An American aid worker in northeastern Syria told WND on Wednesday that as a result of the U.S. withdrawal, ISIS is "on the rise" and more than 300,000 people have been displaced.