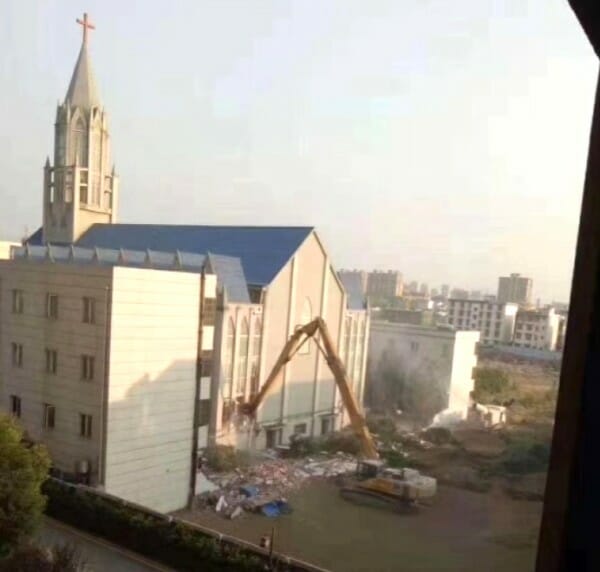 The U.S.-based group ChinaAid said the pastors of the church in Funan, Anhui province, were detained over the weekend.

The church was part of the country's officially recognized Three Self Patriotic network, which is tightly controlled by the Communist Party.

The pastors, Geng Yimin and Sun Yongyao, were detained on suspicion of "gathering a crowd to disturb social order."

ChinaAid President Bob Fu, who was an activist during the Tiananmen Square pro-democracy protests of 1989, said the destruction is "yet another clear example showing the escalation of religious persecution today by the Chinese Communist regime."

"The total disregard of religious freedom's protection as enshrined in the Communist Party's own Constitution tells the whole world President Xi is determined to continue his war against the peaceful Christian faithful," he said. "This campaign will surely fail in the end."

In a declared return to the "original aspirations" of the Communist Party under Mao Zedong, Xi Jinping has been cracking down on its Christian minority along with Uighur Muslims and Falun Gong communities.

China, according to some estimates, has more than 100 million Christians among its 1.3 billion people. Some two-thirds of Chinese Christians attend an illegal or "unregistered" house church.

Most severe repression since 1982

The communist government in recent years has allowed many unregistered Protestant house churches to grow, particularly smaller gatherings, while cracking down on others. But in 2018 the persecution intensified amid Xi's "thought reform," or political indoctrination, campaign.

Experts and activists have called it the most severe systematic suppression of Christianity in the country since religious freedom was written into the Chinese constitution in 1982.

Bitter Winter, a magazine on religious liberty and human rights in China with hundreds of correspondents in the country, reported that in June, more than 200 worshippers were gathered at the True Jesus Church in the town of Caidu in Henan province when it was raided by the Religious Affairs Bureau and then razed.

The official in charge of the raid claimed the church was engaged in "illegal fundraising," making it an "illegal building."

A church worker compared the incident to the events during the 1989 Tiananmen Square massacre.

"The CCP framed university students for rioting and used tanks to crush many of them to death. The Communist Party will resort to any means possible to achieve its goals," the believer said.

On Sunday, Bitter Winter reported that amid pro-democracy protests in Hong Kong, the Communist Party of China has intensified efforts to shut down house churches in mainland China under the pretext of "preventing riots."

The Communist Party also is controlling the printed word in its suppression of religious belief, Bitter Winter said in a report Monday.

Since March 2018, online and retail sales of Bibles have been banned in China. Hymn books and other spiritual books aren't allowed in churches unless sanctioned and published by the government.