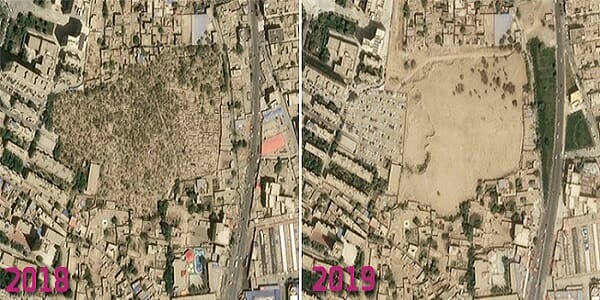 A tech media website in Pakistan charges China's assault on its Muslim population has reached a new level, with a deliberate attempt to erase historic Muslim graveyards.

MazaInside presents satellite images to back its claim that China's aggression against ethnic Uighurs is expanding.

China has instituted a number of travel, job and education restrictions on the minority religious group.

The tech site said China "is destroying Muslim graveyards where generations of Uighur families have been laid to rest, leaving behind human bones and broken tombs in what activists call an effort to eradicate the ethnic group's identity in Xinjiang."

It said "dozens" of cemeteries have been destroyed in the region, documented by an AFP investigation of satellite images by Earthrise Alliance.

"Some of the graveyards have been turned into car parks and even playgrounds, as the pictures show," the report said.

Others were left in disarray.

"In Shayar county, AFP journalists saw unearthed human bones left discarded in three sites. In other sites. tombs that were reduced to mounds of bricks lay scattered in cleared tracts of land."

The images appeared as authorities claimed they were carrying out "normal" tasks after "shocking footage purported to show hundreds of shackled and blindfolded Muslim prisoners being transferred," the report explained.

The persecution is one of the issues the U.S. has raised with China.

The U.S. recently announced visa restrictions on Chinese officials who are accused of involvement in the repression of the Muslim minority.

Secretary of State Mike Pompeo has accused the Chinese government of a string of abuses against Uighurs, ethnic Kazakhs, Kyrgyz Muslims and other minority Muslim groups.

The BBC reported, "These included 'mass detentions in internment camps; pervasive, high-tech surveillance; draconian controls on expressions of cultural and religious identities; and coercion of individuals to return from abroad to an often perilous fate in China.'"

China has denied there are any human rights issues inside its borders.

But the U.S., in a statement, said it "calls on the People's Republic of China to immediately end its campaign of repression in Xinjiang, release all those arbitrarily detained, and cease efforts to coerce members of Chinese Muslim minority groups residing abroad to return to China to face an uncertain fate."

The BBC said, "Human rights groups and the U.N. say China has rounded up and detained more than a million Uighurs and other ethnic minorities in vast detention camps, where they are forced to renounce Islam, speak only in Mandarin Chinese and learn obedience to the communist government."

China also has aggressive campaigns to stamp out the influence of Christianity.