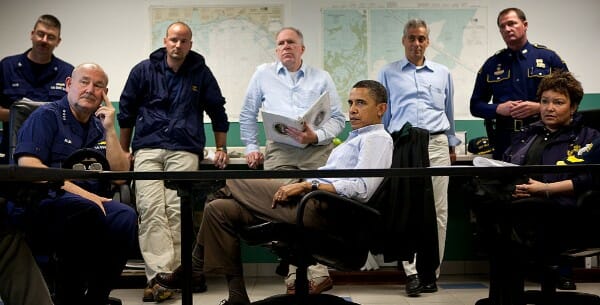 President Obama at a 2010 briefing on the BP oil spill at the Coast Guard Station Venice in Venice, Louisiana (Official White House Photo by Pete Souza)

Top Obama officials John Brennan and James Clapper, along with former FBI special agent Peter Strzok and former British spy Christopher Steele are under scrutiny in the Justice Department's inquiry into the origin of the Trump-Russia investigation.

U.S. Attorney John Durham's focus on the actions of specific individuals means his mission could transform into a criminal investigation, the Washington Examiner reported.

Durham's inquiry recently expanded to include events related to the launch of the Obama administration's Trump-Russia probe in July 2016. The counterintelligence investigation led to the special counsel probe by Robert Mueller that concluded after two years the Trump campaign did not collude with Russia.

Brennan, the former CIA director, told NBC News that Durham wants to interview him and Clapper, who served as Obama's director of national intelligence. The two helped lead the intelligence community’s assessment that Russia interfered in the 2016 election.

Some Republicans allege the CIA used informants to entrap members of the Trump campaign.

Brennan called Durham's focus on him "bizarre." But the Examiner pointed out Attorney General William Barr has said "spying did occur" on the Trump campaign, and Trump gave Barr "full and complete authority to declassify information" related to the origins of the Russia probe.

Durham also has inquired about the writing and signing of documentation that launched the probe by Strzok, the lead investigator in both the Hillary Clinton email probe and the Trump-Russia investigation.

Strzok is known for his texts with his FBI lawyer paramour showing his intent to "stop" Trump from being elected and to have a backup plan in place should the Republican be elected.

Durham is speaking to witnesses about Steele, the Examiner said, the former MI6 agent who produced the infamous anti-Trump dossier funded by the Hillary Clinton campaign and the Democratic National Committee.

Obama FBI and Justice officials presented the dossier as key evidence to obtain warrants from a Foreign Intelligence Surveillance Court to spy on Trump campaign associate Carter Page, according to redacted FISA documents released in 2018.

However, Steele himself testified in court that the dossier's contents were "unverified," and Robert Mueller's special counsel investigation debunked its major claims and could not verify any of them.

The Examiner noted Clinton's presidential campaign received briefings about the dossier in 2016, and watchdog groups allege the campaign concealed its actions from the Federal Election Commission.

The investigation into FISA abuse by Justice Department Inspector General Michael Horowitz concluded in September, and his report is expected soon.

DOJ spokeswoman Kerri Kupec told the Examiner the department was exploring the extent to which "a number of countries" played a role in the Trump-Russia investigation.

She said Barr and Durham reached out to the United Kingdom, Italy and Australia.