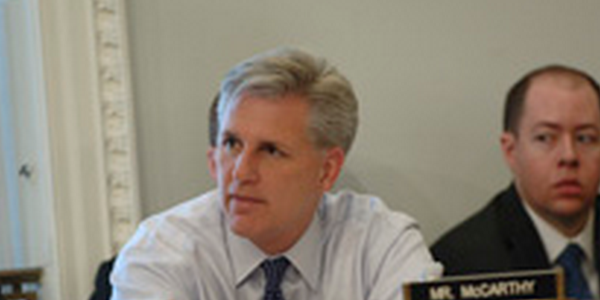 House Minority Leader Kevin McCarthy, R-Calif., called on Speaker Nancy Pelosi on Thursday to suspend the Democrats' "impeachment inquiry" into President Trump until she can establish "transparent and equitable rules and procedures."

In a letter, McCarthy has been given "no clear indication as to how your impeachment inquiry will proceed — including whether key historical precedents or basic standards of due process will be observed."

"In addition, the swiftness and recklessness with which you have proceeded has already resulted in committee chairs attempting to limit minority participation in scheduled interviews, calling into question the integrity of such an inquiry," the Republican leader wrote.

As WND reported earlier Thursday, former assistant U.S. attorney Andrew C. McCarthy points out in a column for The Hill that the House has not voted as a body to authorize an impeachment inquiry, as required by the Constitution. Further, the letter issued to Secretary of State Mike Pompeo demanding he cooperate with Democrat demands to depose State Department officials and review various records is not a subpoena. Rather, McCarthy writes, it's "nothing more than an informal request for voluntary cooperation."

The Democrats' investigation is focused on the allegation of an anonymous whistleblower who, citing secondhand information, alleges President Trump coerced Ukrainian President Volodymyr Zelensky to probe allegations of corruption against Joe Biden and his son Hunter with the threat of withholding U.S. aid. Zelensky insists he didn't feel pressured, and the Justice Department concluded Trump's July 25 phone call with Zelensky did not violate any laws.

What are your intentions?

The House minority leader in his letter asked Pelosi if she intends to grant "co-equal subpoena power" to both the Democratic chairmen and Republican ranking members of the six committees conducting the investigation.

"Do you intend to require that all subpoenas be subject to a vote of the full committee at the request of either the Chair or Ranking Member?" he writes.

The New York Times reported Wednesday that Schiff learned details of the CIA officer's allegations against the president days before the whistleblower complaint was filed.

President Trump reacted to the Times report at a news conference at the White House on Wednesday, calling Schiff's prior knowledge a "scandal."

"I'd go a step further, I think he probably helped write it," Trump said of the complaint.

Responding to the Times story, Schiff spokesman Patrick Boland did not deny that the chairman had prior knowledge of the allegations.

"Chairman Schiff does not know the identity of the whistleblower, and has not met with or spoken with the whistleblower or their counsel," he said, according to Fox News reporter Chad Pergram.