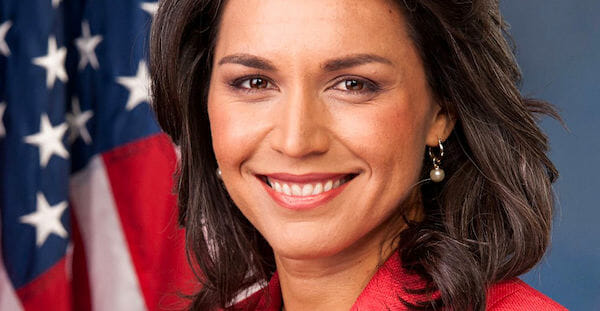 The New York Times, and many other news organizations, recently reported that Hillary Clinton said the Russians were grooming Democrat presidential hopeful Rep. Tulsi Gabbard, D-Hawaii, to be a third-party candidate in 2020, thereby disrupting Democrat voting.

But that's being corrected today. It seems while she called Gabbard a "Russian asset," Clinton accused the Republicans of grooming her.

The controversy created by Clinton's wild claims has given Gabbard, a candidate with poll support running in the low single digits, huge new influence, and a platform to go on video and tell Clinton to leave her "throne" and let the new Democrat party lead the way.

Others, like the Washington Examiner, offered a concise explanation.

"Clinton did not say specifically that Russia is 'grooming' Gabbard for a third-party run," the publication wrote. "Clinton said more broadly that the Hawaii congresswoman is a 'Russian asset.'"

It came in a podcast with David Plouffe, a longtime Democrat activists.

Clinton claimed Republicans have "set their sights already on a 2020 Democratic contestant who they believe can be persuaded into running as a third-party candidate."

The report said, "Clinton's theory is that such an individual would siphon votes away from the Democratic presidential nominee in the general election, benefiting President Trump greatly at the polls."

Her words were, "They are also going to do third-party again, and I'm not making any predictions but I think they got their eye on somebody who is currently in the Democratic primary and are grooming her to be the third-party candidate."

Then she confirmed that Gabbard is a "Russian asset."

Explained the Examiner, "The 'they' and 'grooming' in Clinton's statement are in reference to the GOP, not Russia."

The Daily Mail said Bernie Sanders, at the time, lashed out at Clinton, charging "it is outrageous for anyone to suggest that Tulsi is a foreign asset."

The Mail said the New York Times article as originally published claimed Hillary Clinton had said Russia "was 'grooming' Tulsi Gabbard; the Times quietly corrected it to show whw was talking about Republicans."

Clinton had not specifically named Gabbard in the podcast, but her spokesman, Nick Merrill, said on social media, with, "If the nesting doll fits."

President Trump, responding after the faulty reporting, said, "She's (Clinton) accusing everyone of being a Russian agent."

He said Gabbard is "not a Russian agent. These people are sick. There's something wrong with them."

Gabbard, on social media, said, "If they can falsely portray me as a traitor, then they can do it to anyone. And in fact, that's exactly the message they want to get across to you."