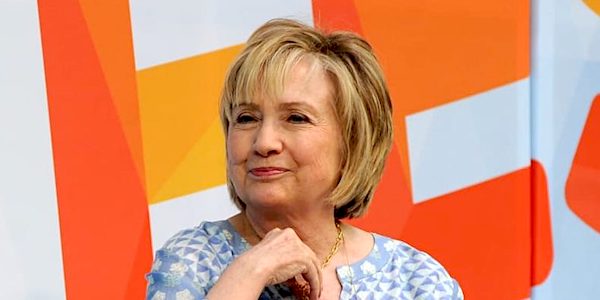 In an interview on the "Campaign HQ" podcast hosted by David Plouffe, Barack Obama’s campaign manager in 2008, Clinton also claimed that Green Party hopeful Jill Stein is a "Russian asset."

"I'm not making any predictions but I think they've got their eye on somebody who is currently in the Democratic primary and are grooming her to be the third-party candidate. She's the favorite of the Russians," Hillary Clinton to @davidplouffe https://t.co/DKH7BLTWs8

So in this one interview, Clinton:

1) Suggested Putin has kompromat on Trump

2) Wagered that Russians will back Tulsi Gabbard third-party

Plouffe asked Clinton about the role third-party candidates, such as Jill Stein of the Green Party, played helping Trump to secure key states in 2016.

Clinton said: "They are also going to do third party again. I'm not making any predictions, but I think they’ve got their eye on somebody who is currently in the Democratic primary and are grooming her to be the third-party candidate."

"She is a favorite of the Russians. They have a bunch of sites and bots and other ways of supporting her so far. That's assuming Jill Stein will give it up, which she might not because she is also a Russian asset," Clinton charged.

Plouffe confirmed the reference was to Gabbard.

The Russia-Gabbard claim was fueled by a New York Times report.

"She is injecting a bit of chaos into her own party’s primary race, threatening to boycott that debate to protest what she sees as a 'rigging' of the 2020 election," the Times said. "That’s left some Democrats wondering what, exactly, she is up to in the race, while others worry about supportive signs from online bot activity and the Russian news media."

Clinton's newfound antagonism to Russia runs far afield from her time as secretary of state for Barack Obama.

Obama, meanwhile, was caught on camera telling Russian President Dmitry Medvedev in 2012 he would have "more flexibility" to work with Russia after his next election.

Medvedev promised, "I will transmit this information to Vladimir," referring to Putin, who was prime minister at the time.

As secretary of state, Clinton pushed for the overthrow of Muammar Gadhafi in Libya while secretary of defense Robert Gates, the Joint Chiefs of Staff and Vice President Joe Biden were opposed, noted Ted Galen Carpenter, a senior fellow in security studies at the Cato Institute, in a column last month for National Interest.

"Libya joins Iraq and Syria as a classic example of the failed U.S. regime-change strategy," he wrote.