See Hillary Clinton compare the Trumps to Ahab and Jezebel:

Anyone familiar with Jonathan Cahn's New York Times bestseller "The Paradigm" would find plenty of irony in Hillary Clinton's veiled comparison of Donald and Melania Trump to the infamous biblical king Ahab and his tyrannical, co-leader wife, Jezebel.

Clinton made the reference Friday at the memorial service of Rep. Elijah Cummings in Baltimore, pointing out the congressman shared a name with the Old Testament prophet who dramatically confronted Ahab and Jezebel.

"Like the prophet, our Elijah could call down fire from heaven, but he also prayed and worked for healing," she said. "He weathered storms and earthquakes but never lost his faith. Like that Old Testament prophet, he stood against corrupt leadership of King Ahab and Queen Jezebel."

Cahn's 2017 book "The Paradigm" shows remarkable parallels between the lives of Bill and Hillary Clinton, and the Israelite king and his infamous wife.

After Hillary Clinton's remarks Friday, Cahn noted to WND that the house of Ahab was known for psychological projection, the defense mechanism of projecting one's undesirable characteristics on someone else rather than dealing with them.

"So now Hillary Clinton accuses Donald Trump and his administration of being the Ahab and Jezebel of America," Cahn said.

"So at the death of the U.S Representative Elijah, the American Jezebel speaks, and speaks of Elijah, Ahab and Jezebel," noted Cahn.

The rabbi of a Messianic Jewish congregation in Wayne, New Jersey, Cahn is a biblical scholar and five-time New York Times best-selling author best known for his novel "The Harbinger," which compares the United States and the 9/11 attacks to ancient Israel and the destruction of the Kingdom of Israel.

His latest bestseller is "The Oracle," which was No. 1 among all fiction books on Amazon and No. 2 of all books during the first 48 hours after its release.

A sampling of the many parallels in "The Paradigm":

Significantly, Cahn points out in "The Paradigm" that just when it seemed that the house of Ahab and Jezebel would go on indefinitely, God raised up a man named Jehu, who was not a politician.

By nature, Jehu was wild, impulsive, unpredictable and a fighter who shook the political world.

Similarly, when it seemed probable in 2016 that the Clintons would continue in power through a Hillary Clinton presidency, the businessman Donald Trump, with a reputation for being impulsive, unpredictable and a fighter,  shook the political world.

In the Bible, Jehu engaged in a showdown with Jezebel, Israel's former first lady.

The result was the fall of Jezebel and the rise of Jehu as the new leader of the land. 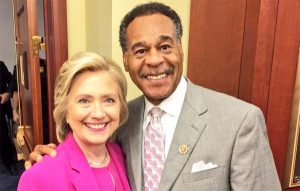 Hillary Clinton poses for a photo with Rep. Emanuel Cleaver, who calls her 'my very dear friend' (Photo: Facebook/Emanuel Cleaver)

In "The Paradigm," Cahn recalls that on the day that Hillary Clinton was to win her party's nomination to run against Trump, a speech hailing her was given at the Democratic convention by Rep. Emmanuel Cleaver, D-Mo., an ordained pastor.

In the speech, after comparing Hillary Clinton to Jesus Christ, Cleaver repeatedly used the line "they threw her down."

The top two hits in a Google search of that phrase are the Bible passages in 2 Kings 9 about the showdown between Jezebel and Jehu. The third hit is Cleaver's speech.

Cahn also points out in "The Paradigm" that Jezebel's time on the public stage of Israel was 22 years with her husband and 14 years on her own.

Hillary Clinton’s time on the public stage was 22 years with her husband and 14 years on her own, with 12 years in office and two years running for president.

The ancient mystery behind Hillary Clinton:

Trump, the Swamp and the ancient mystery: