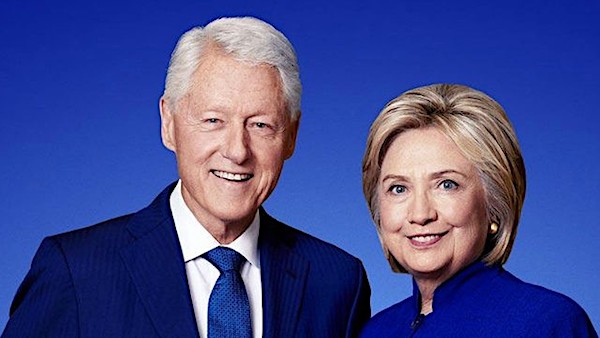 Former Secretary of State Hillary Clinton is insisting Democrats must nominate "the best" to carry the party's banner in the 2020 presidential election, and, well, she's really good in a "really complicated political environment."

The 71-year-old, twice-failed hopeful has left little doubt that she hasn't given up her lifelong question for the Oval Office.

She fell to Barack Obama in the primaries in 2008 then lost to Donald Trump in 2016. But she's continued to make public appearances and sound off on current issues, even picking a fight last week with also-ran Democratic hopeful Tulsi Gabbard.

With some two dozen Democrats vying for the nomination, she said at a book-tour appearance in Portland, Oregon, on Saturday that "at the end of the day, there are a lot of forecasters who are saying, 'Look, if the economy stays in good shape and he's not impeached, or he's impeached but not convicted, it's going to be very, very hard' [to defeat Trump] because of all the advantages he will have on … suppression and everything else."

Clinton touted her credentials, dating back to her work as a junior staff member helping write articles of impeachment against President Richard Nixon.

She fretted about a president "who would try to curry favor with foreign powers," the report said, contending impeachment may eventually sway Republicans in the House against Trump.

"If enough vote against him," she said, it could spark a Republican rebellion in the Senate as well.

The Democratic frontrunners all have vulnerabilities. There's Joe Biden, the gaffe machine whose son was invited to join the board of a Ukrainian firm paying him more than $50,000 a month while his father was Obama's point man for Ukraine policy.

There's Bernie Sanders, the avowed socialist and Elizabeth Warren, who touts Sanders' socialist health care plan while refusing to admit it would require raising taxes on the middle class. Warren also is dogged by her use of a bogus claim of Native American heritage to advance her career along with other apparently tall tales, such as claiming she once was fired because she was pregnant.

At the Portland event, Clinton said, "I hate to be so, you know, simplistic about it. We have to nominate (cough) ... the best."

When someone in the audience shouted, "You," she didn't disagree.

"Oh, my. Well, thank you," Clinton said. "I just feel so strongly that, look, I just want to say a little bit more about this, because what’s going on now with the impeachment inquiry is not a choice it was an obligation under the Constitution."

The former secretary of state suggested Democrats "see who emerges" from the primary, but made it clear “we have to vet them … because believe me they make up stuff about you."

She said it's a big chore to run a presidential campaign while there's chaos in Washington, but she's really good in such an environment.

Fox News columnist Liz Peek pointed out that Clinton never has been able to get past her election loss in 2016.

Peek noted Clinton has blamed her loss on her "enduring belief that the Russians were behind her 2016 defeat, in addition to James Comey, misogyny, Bernie Sanders, the Electoral College, the media and innumerable other villains."

"It's unfortunate, because her inability to take responsibility for the unexpected 2016 loss has helped divide the country and has also made her a laughing stock," Peek wrote. "Unlike most former candidates, Hillary has seen her approval ratings drop since her campaign, and especially among Democrats. In September 2018, two years after the election, Clinton’s approval stood at 36 percent, an all-time low, and seven points below her ratings on the cusp of the 2016 vote. Among Democrats, her approval was down 11 points."

Clinton previously has hinted of a 2020 run, stating in a PBS interview: "So maybe there does need to be a re-match. I mean, obviously I can beat him again."

She later claimed that was a joke.

When the president challenged her to enter the race, she snapped, "Don’t tempt me."

She's also confident she would win, telling CBS, "There were many funny things that happened in my election that will not happen again."

That's even though a poll found 71 percent of voters say she should not run away.

WND columnist Patrice Lewis wrote: "Hillary is nothing if not tenacious. She simply cannot let the results of the election go, convinced something evil and nefarious interfered with her victory."

Clinton, while insisting she's not running, announced a fundraiser for the Democratic National Committee at her Washington, D.C., mansion with tickets as high as $50,000.

American Thinker columnist Richard K. Davis also noted she was at the de Rothschilds estate on Martha's Vineyard this past summer to celebrate Bill's birthday with an "A-list cast of characters, including many Democratic party stalwarts."

And New York Post columnist Michael Goodwin is convinced that Clinton -- who is five years younger than Biden -- wants a third go-round.

In a July 2018 column, Goodwin wrote that Biden has never been a viable candidate, and doubters "should recall the line about pols who get the presidential itch: There are only two cures — election or death."

"Besides, the third time could be the charm," he said.

Author and columnist H.A. Goodman wrote in June that he believes Clinton will run again and raise even more funds than the $1.2 billion she amassed in 2016.

He pointed to a May 1 interview with MSNBC's Rachel Maddow in which she expressed her belief that the Russians cheated her of a chance at the White House and are still rooting for Trump.

Goodman argued Democrats can't approach the "outrageous fundraising total" of 2016 with any other candidate, and "if they don’t win Florida and at least one major state in the Rust Belt, the Democratic Party has no chance of defeating President Trump."

"In addition, once Clinton makes the case that only she can outspend and beat Trump, the shock (among Democrats) of another Clinton run at the White House will be overshadowed by the prospect of a Trump reelection."

Clinton has appeared at the Grammys, released a memoir and showed up on the "Ellen" show, all considered by some to be "hints."

"One hopeful sign for Trump is that voters still believe that America is exceptional and they may be giving him credit."