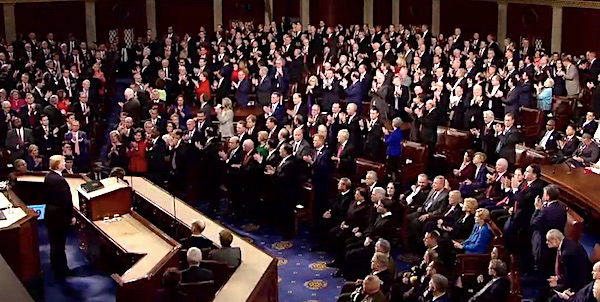 Majority Democrats in the House of Representatives these days are putting virtually 100 percent of their time into their campaign to impeach President Trump.

They've jumped on his telephone call, from July, with the president of Ukraine to claim there was a quid pro quo and have been having multiple witnesses tell them about what they felt about the telephone call, for which a transcript is publicly available.

But now there are new headwinds, according to a commentary from former House Speaker Newt Gingrich.

Its a looming resolution from the U.S. Senate, where any trial for any charges the House would bring against the president would be held.

In fact, Gingrich reports, Sen. Lindsey Graham has written a "powerful resolution" and already has 50 co-sponsors, meaning if everyone else opposed it, Vice President Pence still could cast the deciding vote for it, which would "dismiss any phony impeachment from the house that failed to meet a key standard of fairness."

Gingrich explained the resolution calls on the House to vote in an impeachment inquiry, which House Speaker Nancy Pelosi abruptly announced on Monday before reports appeared Tuesday suggesting that was in flux, to provide the president with due process including the ability to confront accusers, call witnesses and more, and allow members of the GOP in the House the right to "participate fully in all proceedings and have equal authority to issue subpoenas."

He explained that the Trump administration already had said it would not cooperate with a "secret investigation" and the Senate was "prepared to reject a kangaroo court-style secret approach" putting Pelosi in "a box" regarding her strategy.

"If the House Democrats fail to heed the warning of the [Senate] resolution, they will be setting up all their efforts to be dismissed out of hand by the senators who have called on them for real reforms in the current impeachment process," Gingrich explained.

The division between political parties in Congress probably has never been deeper. Democrats say they believe the process being pursued is fair and right and needed, while Republicans almost uniformly condemn it as a "sham."

They accused McGovern "of not giving enough time for Republican members to review the resolution ahead of the vote and continued to blast the inquiry as a whole."

The GOP members charged, "Under House Rules you championed at the beginning of this Congress, major legislation is required to be posted 72 hours in advance of a vote. Yet, here, on the gravest and most solemn work the House can do, you are forcing the House to consider a resolution with text that is still not available two days before the vote."

They said they need the text to know what is the Democrats' plan. Their concerns build on their criticisms of Democrats over recent weeks for holding hearings and interviewing witnesses – about impeachment – in secret.

Democrats said Monday the House would vote on an inquiry on Thursday – because of concerns expressed by Republicans.

Then Tuesday, however, the Washington Examiner reported that Democrat leaders were walking back that planned vote on Thursday.

And Pelosi said her scheduled vote is "not an impeachment resolution."

Hoyer controls the floor schedule on the House and admitted he'd have to "consider whether or not it is ready to go on Thursday."

Rep. Doug Collins, one of the more vocal critics of the Democrats' impeachment campaign, said Congress should be "doing the people's business."

He said the process has been completely unfair and the impeachment campaign has been a "sham."

Graham charged that the Democrats, by suggesting a vote now, are trying to "un-ring" a bell, since they've been grilling their specially chosen witnesses and leaking specially chosen comments and statements for weeks now.

Collins explained, "You can't fix what the craziness that they've done over the past three or four weeks to slam this president and do what they have been doing and now try to make it better."