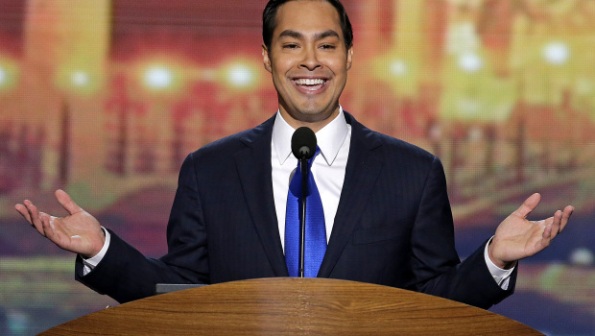 He set up the stunt to protest President Trump's efforts to secure America's borders from illegal entry.

But within hours the 12 all were back in Mexico, and the result was that all that happened was a little publicity for Castro.

"We just heard the terrible news that all 12 of our clients escorted by @JulianCastro were sent back to Mexico. This is of course a mockery of due process," the Texas Civil Rights Project announced on social media.

"The 12 asylum seekers our attorneys, advocates, and Secretary Julian Castro escorted to the Gateway International Bridge of Matamoros and Brownsvhille this morning have been sent back into Mexico."

That action was the result of a new practice by the Trump administration to allow those who want to seek asylum in the United States to apply, but wait outside of the U.S. borders while their situations are evaluated.

The commentary pointed out that all 12, "a group of LGBTQ and disabled asylum-seekers," had previously tried to cross with a lawyer, and were sent back then, too, by Border Patrol.

The Los Angeles Times explained, "Walking across the bridge with Castro were nine gay and lesbian asylum seekers from Cuba, Guatemala and Honduras, as well as a deaf Salvadoran woman and her three relatives."

There was no explanation for the Times' assertion there were 13 asylum seekers and the Texas Civil Rights Project's statement that "all 12" were returned.

Commenters are social media were not inclined to view the stunt favorably.

"Julian Coyote," said one, using the term "coyote" which often refers to those who traffic in human beings and charge people to help them across the border.

Mark Alexander added, "The blow to the rule of law was an elected representative breaking the law by engaging in human trafficking."

And "Exasperated5" said, "Julian Castro STILL not indicted for people smuggling. Indeed, he mocks the law every day he's free."

According to the Daily Wire, "the stunt by Castro … was executed to illustrate his opposition to a policy barring migrants who seek asylum from staying in the United States before their court dates, dubbed the 'Remain in Mexico' policy."

Castro previously was mayor in San Antonio and secretary of Housing and Urban Development under Barack Obama.

The report said, "Border Patrol responded to the display by following the law, returning the migrants Castro used as props back to Mexico by 5 p.m. local time."

The Wire noted Castro has "stood out" among Democratic candidates for president because of his bizarre comment during a June primary debate.

"Let's also not forget someone in the trans community, a trans female, is poor, doesn't mean they shouldn't have the right to exercise that right to choose," he said in a reference to abortion.

The Wire noted, "Of course, biological men, or transgender females, cannot have children. So it's unclear why they would need abortion 'rights.'"