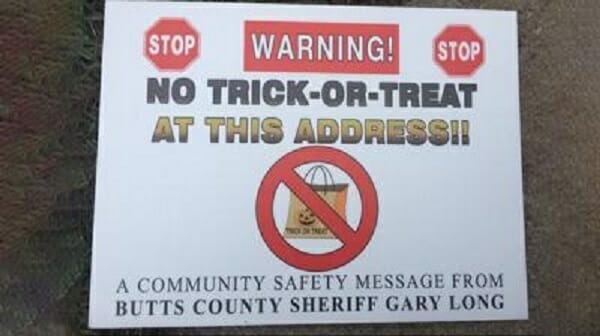 A plan by a Georgia sheriff to place warning signs in the yards of the residences of sex offenders – to protect trick-or-treating children – has been stopped by a federal judge.

The sex offenders had claimed that the signs "were a form of forced speech," the report said.

"Sheriff Long and his deputies placed the posters in offenders' yards last Halloween, and the sheriff wanted to do it again this year to 'ensure the safety of our children,' he wrote in a Facebook post last week," the report said.

The signs were to state "Stop, Warning! No trick-or-treat at this address!! A community safety message from Butts county Sheriff Gary Long."

The sheriff said he disagreed with the decision.

"For this Halloween, our deputies will keep a very strong presence in the neighborhoods where we know sex offenders are likely to be," he said in a statement. "Deputies will have candy in their patrol vehicles and will interact with the children until the neighborhood is clear of Trick-or-Treaters."

The names, addresses and even photographs of sex offenders are public information under Georgia law.

Treadwell, however, said he didn't think there was a provision allowing sheriffs to post that information in front of sex offenders' homes.

The judge conceded his ruling would not be an obstruction to the sheriff's "discretion to act on specific information suggesting a risk to public safety."

The Gateway Pundit said Long also publicized a link to a list of sex offenders.