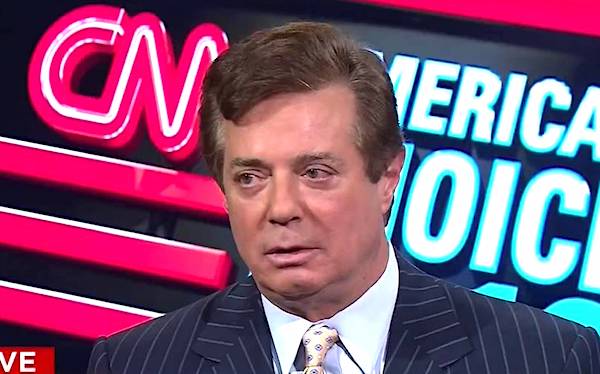 Documents obtained by Washington watchdog Judicial Watch on Tuesday reveal Associated Press reporters met with the FBI and provided information to the bureau, including the access code to Paul Manafort's storage locker in advance of the government's investigation of the onetime Trump campaign chairman.

The AP reporters told the agents that Manafort got money from Sergii Leshchenko and had documentation "showing the money was routed through a company in Belize called Neocom Systems. The money then went into a Wachovia account. This money came from the Party of Regions."

"AP believes Manafort is in violation of the Foreign Agents Registration Act, in that Manafort send (sic) internal U.S. documents to officials in Ukraine," the papers show. "AP has documentation proving this, as well as Manafort noting his understanding doing so would get him into trouble."

The AP reporters asked about the charges the government could bring against Manafort. They also asked "about DOJ's and FBI's knowledge and status of investigating a storage unit owned by Manfort in Alexandria, VA since 2012. The gate code to access this storage unit is 4094489. This storage unit may have damning information regarding Manafort's work in Ukraine for the Party of Regions," the documents state.

AP also asked about tax violation investigations and claimed it had information that Manafort used money from shell companies to buy expensive suits.

The reporters asked about other subjects and offered other details, the documents show.

Judicial Watch said that two months later, Weissman was hired by Robert Mueller for his special counsel probe of President Trump, and Weissman then "spearheaded" the prosecution of Manafort.

The FBI said, "The purpose of the meeting [with AP], as it was explained to SSA [supervisory special agent, redacted] was to obtain documents from the AP reporters that were related to their investigative reports on Paul Manafort."

Judicial Watch said the documents were not included in the release of the information.

The notes that were released "suggest the AP pushed for criminal prosecution of Manafort."

The FBI documentation said federal agents made no commitments to the reporters.

"The AP reporters discussed an extensive list of issues, companies, and individuals that they felt should be investigated for possible criminal activity, including a $50,000 payment to a men’s clothing store; a 2007 meeting with Russian oligarch Oleg Deripaska; Loav Ltd., which was possibly incorporated by Manafort; NeoCom, which the AP reporters implied was incorporated solely to cover up money laundering; and other matters," Judicial Watch said.

"The reporters described an 'internal U.S. work product that had been sent to Ukraine," the report said.  The FBI report stated that it "was not clear if the document was classified."

"These shocking FBI reports evidence a corrupt collusion between the DOJ and the media, specifically The Associated Press, to target Paul Manafort," said Judicial Watch President Tom Fitton. "These reports are further reason for President Trump to pardon Manafort and others caught up in Mueller's abusive web.”

The documents come from a Freedom of Information Act lawsuit.

Judicial Watch said, "Under Mueller, Weissmann became known as 'the architect of the case against former Trump campaign chairman Paul Manafort,' which produced no evidence of collusion between Manafort, the Trump campaign and Russian operatives. It indicted Manafort on unrelated charges."

Said the watchdog: "In an October 2017 article describing Weissmann as Mueller's 'Pit Bull,' The New York Times wrote, 'He is a top lieutenant to Robert S. Mueller III on the special counsel investigation into Russian interference in the 2016 election and possible links to the Trump campaign. Significantly, Mr. Weissmann is an expert in converting defendants into collaborators — with either tactical brilliance or overzealousness, depending on one's perspective.' Weissman oversaw the pre-dawn home raid of Manafort in what one former federal prosecutor described as 'textbook Weissmann terrorism.' Weissmann reportedly also attended Hillary Clinton’s Election Night party in New York."