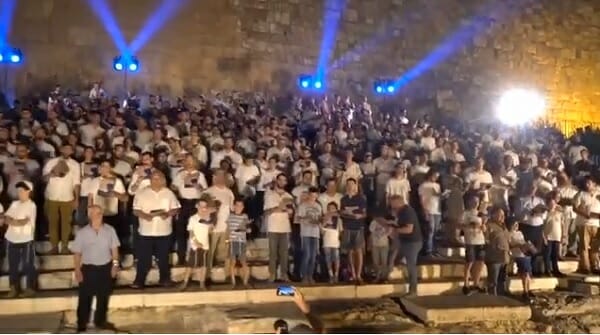 In what is regarded as a first since the last Jewish Temple stood in Jerusalem, Levites have returned psalm-singing to the historic site.

Some 800 members of the Jewish nation's tribe of Levi "joined together on the stairs in front of the Hulda Gates in the Davidson Center adjacent to the southern wall of the Temple Mount" on Oct. 16, reported Breaking Israel News.

They joined in singing three songs that the historic Levites originally sang in the Temple.

Held by the Old City Rehabilitation and Development Fund, the event was led by Itzik Weiss, as musical director, and Yotam Segel, as conductor.

The psalms were not sung on the actual Temple Mount because of strict restrictions over events that are allowed there, given the site's management by a Jordan-based Muslim organization.

"Levites (a Jewish male descended … from the Tribe of Levi) were chosen during the Exodus from Egypt by God to serve in the Tabernacle and, subsequently, the Temple. Some of the Levites in attendance wore special garb intended to be used in the Third Temple. Silver trumpets created for use in the Third Temple were also used in the performance," the report said.

Three of the 15 psalms that were traditionally sung on the steps inside the Temple including Psalm 121 and 126 were used.

Reported BIN: "The event nearly did not take place. A few weeks before the prayer event was scheduled to take place, the Woman’s Lobby petitioned the organizers to cancel the event as it did not include women. The organizers maintained that the event was intended as a re-creation of a Biblical ceremony that was performed by men in the Temple."

Fund spokesman Daniel Shukron told BIN it was a replication of a historic event: There was "no audience, no tickets, and no reason to protest."