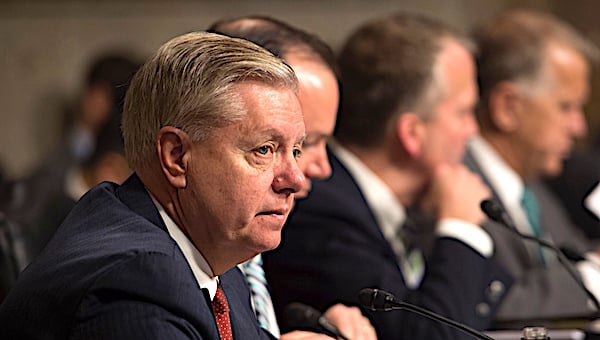 U.S. Sen. Lindsey Graham, R-S.C., charges House Democrats are on the verge of destroying America with their campaign to impeach President Trump over what the White House contends was a routine phone call with a foreign leader.

Graham now wants to make it clear to Democrats that if they impeach Trump, the Republican-majority Senate will not convict him.

"I'm going to ask my colleagues in the Senate — Republicans — to sign a letter to [House Speaker] Nancy Pelosi saying we do not believe the transcript of the phone call between the president and the Ukraine is an impeachable offense," Graham said in an interview Wednesday with Fox News.

"I've read the transcript. I do not see anything wrong there, and I want Nancy Pelosi to know that Republican senators are not going to impeach this president based on this transcript. So she can stop now before she destroys the country," he said.

He criticized the Democrats' efforts to turn the phone call – for which a transcript has been released – into an impeachable offense.

Democrats contend the president was using the threat of withholding American aid to pressure Ukraine to investigate Hunter Biden's receipt of millions of dollars from a Ukrainian natural gas while his father was Obama's point main for Ukraine policy.

The White House argues, among other things, that the transcript of the call doesn't support claim of a quid pro quo, the Justice Department ruled the conversation didn't break any laws and the Ukrainian president insists he wasn't pressured.

House Speaker Nancy Pelosi announced an "impeachment inquiry" last month, but there has been no full vote of the House. House Republicans contend they are being shut out of the process, and the White House said Tuesday it will not cooperate without due process.

Graham said he would like to cut all the waste of effort and time.

"The House could care less about fairness. [Rep. Adam] Schiff is not looking for the truth," he said. "There should be a vote on impeachment. You have to have a vote to make it legitimate, and at the end of the day, I am going to shed light on all things Ukraine."

Graham accused the House of running a "star chamber process."

While the House is tasked constitutionally with bringing impeachment charges, only a two-thirds majority of the Senate can convict a president.