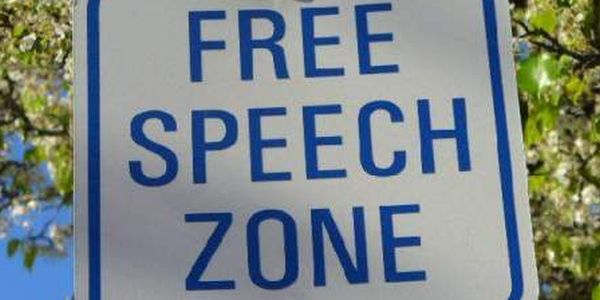 A majority of Americans are happy to have restrictions on speech imposed on America – including rewriting the First Amendment – if the speech to be restricted is called "hate speech," a new poll finds.

The Campaign for Free Speech said its new poll shows "51% of Americans think the First Amendment is outdated and should be rewritten."

The First Amendment protects those inalienable rights of free speech, assembly, freedom of religion and such.

For the millennials, considered to be those people born in the 1980s or 1990s, 59% were willing to lose free speech.

The poll explained it didn't define "hate speech" but left that up to each respondent, and found some stunning results.

"Half think the punishment for 'hate speech' should include possible jail time, while the rest think it should just be a ticket and a fine," the report said.

The poll said, significantly, "80% don't actually know what the First Amendment really protects. Those polled believed this statement is true: 'The First Amendment allows anyone to say their opinion no matter what, and they are protected by law from any consequences of saying those thoughts or opinions.'"

"It's actually not true. The First Amendment prevents the government from punishing you for your speech (with exceptions such as yelling 'fire' in a crowded area to induce panic)," the report said.

"But more broadly, freedom of speech does not mean you are protected from social consequences for your speech. You may have the right to say something extreme or hateful and not get thrown in jail, but others in society have the right to shun you," the report said.

"We believe there are at least two factors at play. One is the obvious polarization of politics and the media. While many who identify as conservative may dislike the reporting of CNN and would likely favor sanctions for 'fake news,' many progressives or liberals may feel the same way towards Fox News," the Campaign report said.

"Second, we hear much about 'hate speech.' Although the term is never defined, most agree that it should be opposed, rebuked, and criticized. But should it be punished by the government? If the government is in charge of determining what is hate speech, then it inevitably becomes political – a weapon that can be used to punish people on the other side of an issue."

The Free Beacon reported the poll also showed more than 60% of Americans agree on some sort of speech restrictions.

"The findings are frankly extraordinary," Campaign executive director Bob Lystad told the Washington Free Beacon. "Our free speech rights and our free press rights have evolved well over 200 years, and people now seem to be rethinking them."

The report said, "American hostility to the First Amendment did not stop at speech. Many would also like to see a crackdown on the free press. Nearly 60% of respondents agreed that the 'government should be able to take action against newspapers and TV stations that publish content that is biased, inflammatory, or false.' Of those respondents, 46% supported possible jail time."

"I think [our findings] are fueled in large part because of a rise of hate speech, but traditionally, hate speech is protected in the First Amendment," Lystad told the Beacon. "The Supreme Court has upheld that principle time and time again."

Commenting is now back! As part of our solution to Google’s attacks on our commenters, we are switching our commenting platform to INSTICATOR. Don’t worry! We’ve saved all your account info and comments from previous articles. All you have to do is sign in with the same email and password you had for Disqus, and you can keep sharing your comments with the worldwide WND community! If you have any feedback or questions about your account, please email us at: commen[email protected]